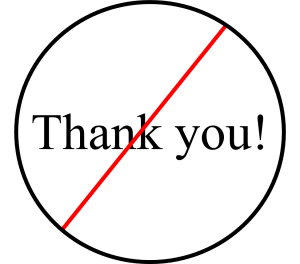 I've been doing my “How to Speak” IAP talk in 6-120 for three decades. With 154 seats, it has been a little too small, but I was reluctant to take on one of the bigger halls, because I teach that talks given in sparsely populated venues have an unimportant feel.

This year, the Physics Department did me a favor and mysteriously booted me out of 6-120.  I landed in 10-250, the Center of the Universe, MIT's second largest hall, with 425 seats.  I was relieved when 11 am rolled around and it was much closer to full than half full.

Anyway, I always try to add something new, so this year I buttressed my argument against concluding a talk with thank you using some video from the Republican and Democratic Conventions.

Governor Christie knows something about speaking, so it was worth noting that he had no thank you at the end of his keynote speech:

No thank you. Instead, Governor Christie used the classic call to arms ending, followed by a benediction.

What about President Clinton, who also knows something about speaking. How did he end his keynote speech?

Again, the classic call to arms ending, followed by the same benediction.

The common thank you ending isn't a disaster, but it is a weak move. It signals to some, perhaps many, perhaps subliminally, that the speaker lacks self confidence and feels that the audience has stuck around just to be polite.

If a talk has been good, the speaker has done the audience a favor, not the other way around.

So how do you conclude a technical talk, especially a technical talk that is part of a job application? The call to arms and benediction endings generally won't work, but you can simply say, “With this summary of my contributions, I have concluded my talk.” Everyone will know you are finished because you will walk over and shake hands with your host, just as the conductor shakes hands with the concert master to signal that the time has come to clap.

This is highly culturally dependent. I was taught very firmly this same rule that Dr. Winston advocates. However, it is just a cultural norm, not an inescapable logical conclusion. In some cultures, thanking the audience is ingrained and an essential part of politeness. Trying to convince a person in one of these cultures to drop it is not perceived as doing them a favor.

Externship: Trust, Quality, and Investment in Your Work

Podcast: Dignity, Taste, and Charm: A Tour of IAP