Then end of live lectures? Maybe not yet.

All Part of the Experience, Past and Future 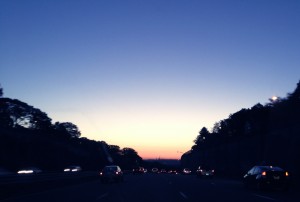 The sky was nicely blue when I drove into Cambridge the other day. “Rayleigh scattering,” I said to myself, and remembered that this is the golden anniversary of the 8.03 quiz from hell in 1962.

I had showed up a year before, soon to be scared to death. Because I came from a high school located in a small town in Illinois, I was easily intimidated. Some of my fellow students seemed to have gone to name-brand prep schools; others went to big city schools with science tracks. For the first several weeks, they all seemed to understand everything, and I felt like I understood nothing.1

As it turned out, fear was good, because I developed good study habits and they didn't. They hit a wall in six weeks, but I kept going.

Then, when we were sophomores, came the 8.03 quiz from hell. We all had to take four physics subjects in those days, not just the two required today.

The subject was Rayleigh scattering. I had studied hard, but still felt the quiz was difficult.

The details have faded a little, but as I remember it, when my recitation instructor handed me my graded quiz, I saw that I got 27 out of 100.

I cracked. “It has taken more than a year, but I finally have been found out.” I said to myself. “I will fail 8.03. My father will make me go back to East Peoria. I will try to get into one of the community colleges, majoring in who knows what,” I thought. “I will be a disgrace. I will never be able to marry, or have a family.” Finally, worst of all, “He will make me go to law school.”

Then, my instructor announced that the class average was 18, so I was one or two standard deviations above.2 It was just a 30 second roller coaster ride. Life was good again.

1 East Peoria Community High School was a great public school, actually, with inspiring teachers, but it took a while before I realized that.

2 The physics instructors were so mad about our performance, they gave us essentially the same quiz again, two weeks later. Some remember the class average going down. Decades later, I learned that the quiz was made up by physics professors who were not teaching the subject, so our bad performance had a good explanation.

I never had anything quite like that at MIT, but as a grad student at UCSD once there was a physics exam, 8 questions, 5 points per question and one of the questions was totally trivial, so everyone got full credit. Of the remaining 35 points, I got 7 for a total of 12 and class average was 11.

I recall a similar experience in 2.30, which was considered one of the harder mechanical engineering courses back in the late 1970s. We had just studied "stress concentrations" and the quiz tricked most of us because the beam actually had a force applied in such a way that the stress at the marked defect was in the direction to close the defect, and the formulas we has just learned and were only too willing to use did not in fact apply...

I had the same experience. Coming from a small town high school, I had heard the word Calculus, but I was not sure what it meant. My High School guidance counselor advised me not to apply to MIT because no-one from our high school had ever gone to MIT. However, after working very hard during my first year, I was able to make the Dean's List every year that I was at MIT. I learned how to work hard, and it has been my experience that the successful people in this world are just those who learn how to work hard. I owe a large debt of gratitude to the MIT Educational Counselor in a nearby city who convinced me to give MIT a try. That is why I have served as an MIT Educational Counselor for the last 25 years, so that I might do the same for some other student. By the way, I always advise them that they must learn to work very hard in order to succeed at MIT. Thanks for the article, Prof. Winston.

Don't remember a disaster like that in 8.03 (my downfall was 6.01) but I had something similar in grad school at Stanford in a control theory course....got 50% on the final but still got an "A" in the course because a lot of people got zeros on the final.

How this story resonates! Every bit of it. I, too, felt I was less prepared than everyone around me and blamed my high school. It took me more than 6 weeks to equalize, though! Maybe more like a year. And I, too, came out of one test experience (in my case, my grad school qualifiers) feeling that I was doomed to be a failure in life. I passed the first time, as did my classmates who were similarly bemoaning their dismal fates. And then there was the exam with the grade that looked disastrous, but was actually the top grade in the class. (One of the few times, I hasten to say, that I can claim that.) In my case, the professor berated the rest of the class, "You guys let a girl beat you!" Ah, memories!

I had taken College Physics in my Senior year of high school, so I was shocked when I got a 53 on my first 8.01 test. It's nice to know I wasn't alone.

I had similar in Chem E Thermodynamics: 1st exam I rec'd lowest passing grade, 12/100 while class avg was 22, 2nd exam after daily tutoring by professor was 88/100 while class avg had only climed to 48. Redemption! Remaining exams, I only worked hard enough for class avg.

I had a very similar experience with 8.03 in the early 80's. I still remember getting a 43 on the first exam, and then finding out that it was one of the highest grades. The same roller coaster

Boy, do I remember these kind of days while attending the Institute in the late seventies.

Prof. Winston was my graduate thesis advisor, so it amuses me that his worst fear was that his father would make him go to law school if he failed 8.03.

The truth is, teaching Prof. Winston's 6.034 recitations was one of the greatest things I did to prepare me for my current profession, a lawyer.

Then end of live lectures? Maybe not yet.

All Part of the Experience, Past and Future

The Periodic Table of Chocolate-dipped Strawberries