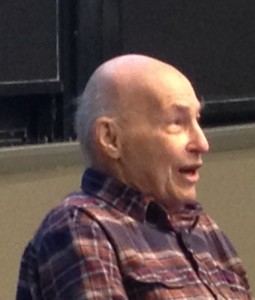 It was quite a semester. More than 300 students showed up in my subject, Introduction to Artificial Intelligence, and through various accidents of nature, I was the only faculty member involved. I wondered, “How can I supply the enrichment normally provided by recitation instructors?”

I decided to sprinkle in what I called right-now lectures. These would be given by people talking about their current research on topics I was introducing in my lectures. So, my students would get organized instruction from me plus inspiration from eight right-now speakers, each of whom is the best in the world at what s/he does. With EDx coming on fast, it occurred to me that inspiration is a big part of the value added when you take a subject taught in person.

Marvin Minsky was the final speaker in the series. I could have introduced him by enumerating all his awards, but I decided to tell a story instead:

That was the introduction. Then, Marvin said, “We've come full circle. I want to do what you do.” That was the ultimate in positive feedback.

And Marvin was Marvin, a little rambling but a lot of inspiration. Once again, I expect there were students out there in 10-250 thinking, as I had, “I want to do what he does.”