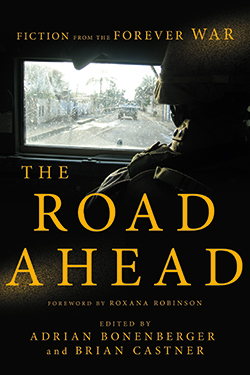 In the new anthology, The Road Ahead: Stories of the Forever War, 24 veteran writers share stories about life before, during, and after serving in the wars in Iraq and Afghanistan. In this book, though, all  of the stories are fiction. “Sometimes you can say truer things in fiction than you can by telling a straight nonfiction story,” says contributing writer Teresa Fazio ’02.

The book, which is similar to the 2013 fiction anthology Fire and Forget: Short Stories from the Long War, brings in new voices and styles including satire, magical realism, and stream of thought. “The conscious thought behind this anthology was to make the fiction more diverse,” says Fazio, who assisted editors Adrian Bonenberger and Brian Castner with selecting the stories. “[We were] looking for different perspectives beyond the canonical white male war story,” says Fazio. While there are stories of veterans trying to re-acclimate to non-military life after experiencing war atrocities, “we were looking for more.”

Kristen L. Rouse’s “Pawns” tells a story from the perspective of an Afghan supply truck driver, a population she knew well during her deployments working in Army logistics.  “Death of Time,” by Maurice Emerson Decaul, is inspired by The Iliad and describes life as a child war bride in the Middle East, while Elliot Ackerman’s “Two Grenades” talks about a soldier so eager for recognition that he gives himself a self-inflicted wound.

Fazio’s “Little” is about a high-ranking female captain who grapples with her own femininity in a world that rewards more masculine traits. Over the course of her high-stress work environment, she develops romantic feelings for a lower-ranking male officer. “Balancing how you are seen professionally with the directions your heart might lead you in can be very difficult,” says Fazio.

She describes similar moral debates in her forthcoming memoir about a relationship she had during her Iraq deployment. The book describes her time in Iraq and then her choice to leave the Marines to pursue a PhD in materials science at Columbia University.  As she adapts to non-military life, she comes to realize that femininity can be a source of strength.

The memoir also continues the theme of living between worlds that she surfaces in “Little.” “The autobiograpical parts in much of my writing have to do with feeling between worlds, which, maybe, a lot of MIT students grow up feeling. We come to MIT because it feels like home in many ways, which is not necessarily a flavor of home we have ever felt before. I know that was the case for me.”

Join Fazio and many other veteran alumni in the MIT Military Alumni/ae Association. Fazio and several of the other The Road Ahead’s contributing authors will be speaking about the book at Greenlight Bookstore in New York City on April 3, 2017. Read more of Fazio’s work in the New York Times and follow her on Twitter @DoctorFaz.