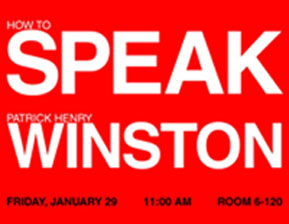 It must have been about 30 years ago, because Robert Sjoberg, SM ’81, made me do it.

We were sitting in my office, whining about somebody's horrible lectures, when he said, “You should do an IAP class on how to speak.” “No,” I said, “I've never given a lecture I rate at better than a B+; I'd be depressed for a month afterward; it would take a week to prepare; and, besides, nobody would come.”

Actually, that first edition of How to Speak drew about 100. This past week about 250 showed up. It's a little hard to say exactly because 6-120 officially seats 150 and perhaps another 100 sat on the stairs and floor or stood in the back or watched from the hall.

Some elements of the talk were the same that Robert heard that first year. Start with an empowerment promise, something everyone will be able to do at the end that they are not able to do at the beginning. Finish with a reminder that you have delivered on your promise. Avoid thanking the audience, because that suggests insecurity, but exit with a joke, if you can, because that way people will think they had fun the entire time.

There is much more now, of course, because I keep learning new things. I've added techniques for passing oral exams, delivering successful job-interview talks, and ensuring that ideas become as famous as they ought to be.

Some say How to Speak has become an MIT tradition. I think of it as an exemplar of the spirit of IAP: people in the MIT community taking care of their own and having fun doing it.

It is highly nonlinear, of course. I imagine that everyone in the audience is empowered by at least one idea, and that may be the idea that improves a talk that lands a job that enables a high-impact career.

By now, more than 5000 people have heard How to Speak. Pretty good return on the 10 minutes it took Robert to talk me into doing it.

Editor's Note: You can hear a version of Prof. Winston's talk (recorded by Harvard).

Tech Connection says that I should watch a video of Prof. Winston. I click in and there is no video. Could this please be corrected?
Many thanks,
a

I remember your AI course from 1990. Thinking back, I seem to remember that you practiced what you preach!

The video is here: http://isites.harvard.edu/fs/html/icb.topic58703/winston1.html

I checked and there is no video version - and I'd love to see it too. I've asked Prof. Winston about covering the talk next year.

Was this presentation recorded so that those of us not in attendance can view it?

Externship: Trust, Quality, and Investment in Your Work

Podcast: Dignity, Taste, and Charm: A Tour of IAP