It was 11:59 p.m. on Pi Day, March 14, in the MIT Alumni Association (MITAA) headquarters. The lights were still on. As midnight arrived, a cheer went up among the MIT Annual Fund staffers there working late into the night. The third annual MIT 24-Hour Challenge had not only reached its original target of unlocking a $314,159 challenge gift from an anonymous donor, but had inspired participation from enough donors to obtain a $50,000 bonus from a second benefactor and to meet more than 60 microchallenges issued by supporters of programs and groups across MIT. “One thing is clear,” wrote MIT Alumni Association CEO Whitney T. Espich in a note announcing the results to all Institute alumni and friends. “MIT is fortunate to have this one-of-a-kind community. Your generosity, care, and dedication fuel the future at MIT.”

In total, a record 9,397 donors made gifts to MIT over the course of just one day, totaling $3.75 million. (Learn more about the final tallies.) 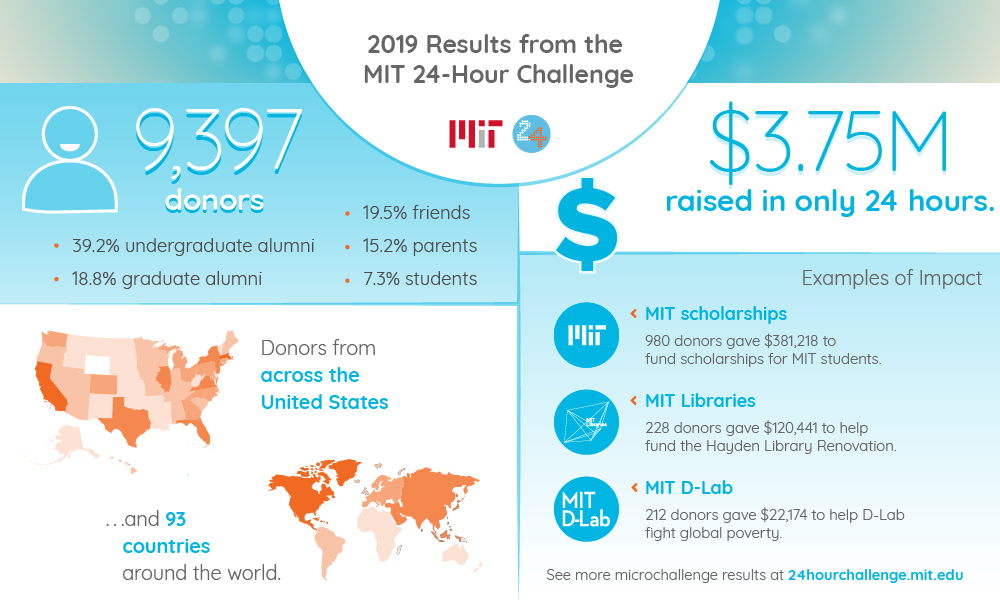 Of course, the team in the MIT 24-Hour Challenge HQ couldn’t have brought in so many gifts on its own. All across the world, MIT alumni and friends were celebrating the unofficial “nerd holiday” that is 3.14, with many featuring Challenge-related drives. Over on campus, a Pi Day Fair was set up in Lobby 10, complete with pies, a Pi recitation contest, and a Cash Cube, in which students grabbed for dollars that could be distributed to areas of focus for MIT’s Student Philanthropy Program.

All of these moments led to a Pi Day for the books. The MIT Annual Fund credits the success to the collaboration across the entire Institute and throughout the widespread community of MIT alumni, students, and friends. Among those working hardest on March 14 to activate that network were a cohort of 544 volunteer Web Ambassadors.

Each ambassador received a personalized link to share with those they encouraged to give during the challenge. As Pi Day went on, the ambassadors were able to track the progress of their efforts, which ranged from social media posts to phone calls to emails—many, many emails. In all, 995 gifts were linked to the outreach of Web Ambassadors.

For three volunteers whose efforts met particular success that day—each bringing in between 35 and 50 gifts—the payoff went beyond seeing the dollars add up. Each was working to raise funds for a particular program close to their hearts. Yet, as they tell it, the day also cemented the connection they feel to the MIT community, which has proven again and again that it can join forces to become far more than the sum of its parts.

It is really easy for me to support MIT and ask people to contribute. It’s easy to sell something you honestly believe in.

LSC is a student-run organization that runs an on-campus movie theater and hosts special lecture series events. We successfully held a microchallenge on Pi Day for a new projection and sound system that will help us stay on top of the future of the digital era.

The most “MIT” thing we experienced during the 24-Hour Challenge this year was reconnecting with our alumni. One alumnus replied to us with a success story about a showing of Zorba the Greek he ran all the way back in the '60s. We loved hearing about the days when LSC ran shows in Kresge and sold out houses constantly. What we loved the most about his response is the photo he included of them celebrating in the LSC office afterwards.

It is beyond words to express how faithful our alumni have been to LSC. They’ve shown up to help us reacquaint ourselves with old equipment and rushed to the scene when we messaged out that we needed assistance urgently. One alum works for the projection company that supplied us with the most affordable quote for the projector for which we just successfully fundraised. Another signed up to be our donation matcher for this big challenge we completed. Others offered consulting, publicity, advice, and stories from their time in LSC. All of them were invaluable in achieving our fundraising goal.

Thank you, LSC alumni. Your generosity and goodwill go to show the decades-old LSC motto we are all familiar with: It doesn’t suck.

The MIT chemistry department is my home for the next four years (at least). The Chemistry Alliance for Diversity and Inclusion (CADI) is dedicated to making that department a more diverse and inclusive environment, and providing a space to engage with each other and share the diversity that already exists. The additional funding we raised on Pi Day can go toward improving the experience of everyone in our department, through a mentoring program for underrepresented minority applicants, monthly open forums and events within the department, and professional development opportunities with chemists from around the country.

The message was simple: help make MIT a more inclusive environment where everyone can feel comfortable and supported. Most of our donors ended up coming from inside the department, and we were really proud of the chemistry graduate students during the MIT 24-Hour Challenge. Hitting our microchallenge goal of 100 donors on Pi Day was really a team effort.

It is really easy for me to support MIT and ask people to contribute. It’s easy to sell something you honestly believe in. Why MIT Crew? I rowed crew for all four years. I didn’t think much about the character-building aspects of the sport until much later in life. As I’ve “grown up,” I’ve learned a lot about how the cold cruel world works—money really runs everything and there is only so much to go around. Crew is expensive. Alumni contributions are a big part of keeping it afloat (pun intended).

Why else do I do this? Fundraising for MIT is something I can squeeze into my schedule wherever it fits—kind of like stuffing the little odds and ends into the corners of your suitcase. It’s also a fun challenge, and it has forced me outside of my comfort zone. Having MIT as a partner makes this all the more fun because I know that they have the know-how and technology to make ideas happen.

I have been an MIT ambassador for three years. Being the goal-oriented, efficiency-focused, occasionally socially-awkward MIT alum that I am (and as many of us are), I started out my fundraising attempts being very blunt—just admitting up front that I wanted them to donate money. Result: limited success. I had some help from the staff at the Annual Fund and some subtle suggestions for softening the message. I also learned the magic of “thank you” for something as simple as opening the email. Then you have to encourage them to think about why they might want to give. What about MIT makes it a positive experience in their life? And finally, I learned that you need to speak with your own voice. Be sincere and grateful.

Throughout the entire Pi Day effort—building up to it and during the day—everyone was pulling together (another crew pun, sorry). Collaboration rather than cutthroat competition is what I felt when I was a student at MIT, and it is still what I feel when I work with MIT alum and staff.

One exception, and I didn’t want to ever admit this: Steve Larky—watch your back! I got up just before midnight to log in the first crew donation, but you still beat me to it!

Photo (top): On March 14, Pi Day events such as this one in Lobby 10 were held across campus as well as hosted by alumni clubs around the world. While marking this MIT-cherished holiday that celebrates the mathematical constant beginning 3.14, the Pi-themed activities also helped to spread the buzz about the MIT 24-Hour Challenge. Credit: Rebecca Rodriguez.