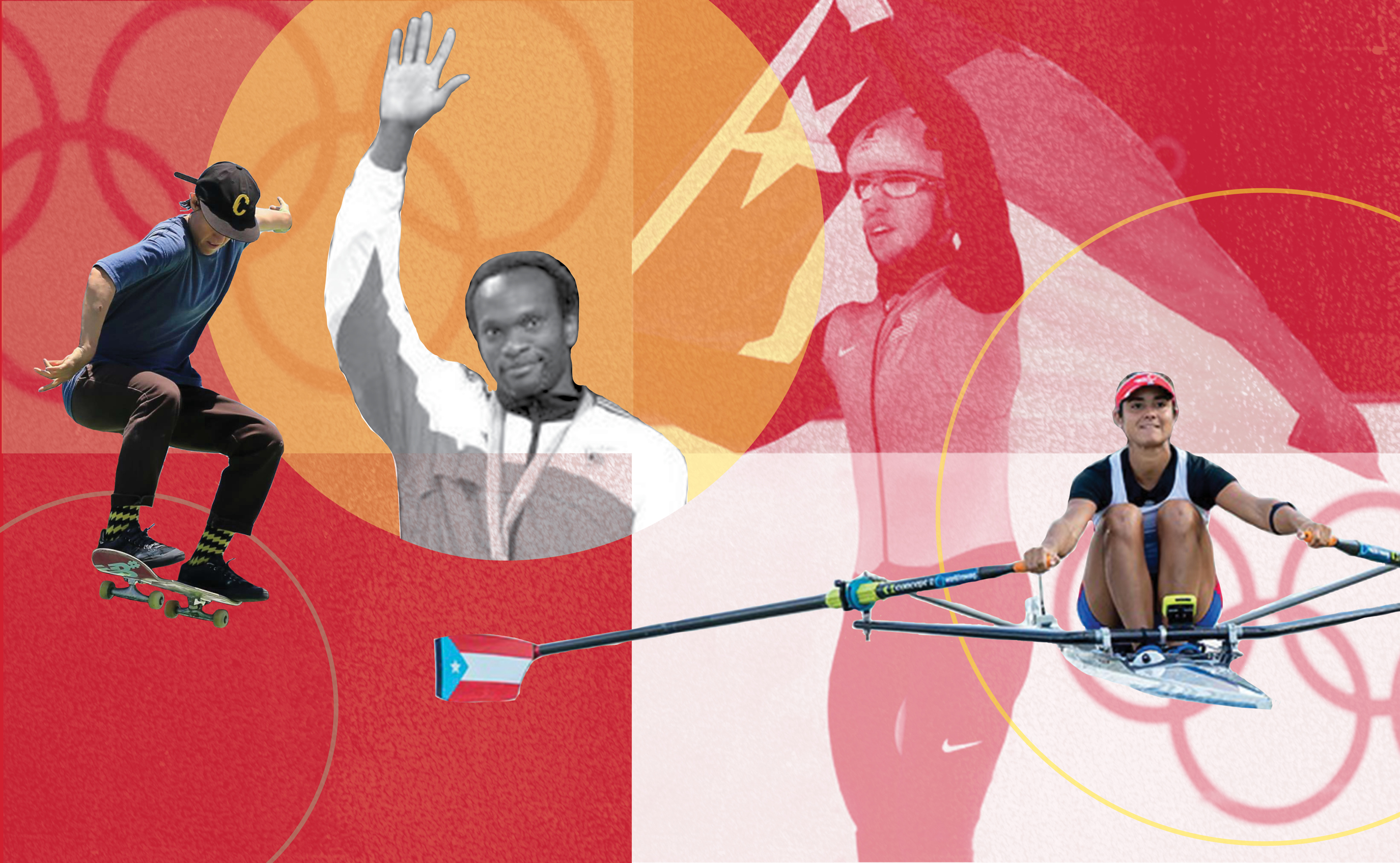 At a school known for its Nobel Prize winners, it’s easy for athletes–even Olympians–to get overshadowed at MIT. But the Institute has a long Olympic history, from the first modern Olympic Games in Athens in 1896 to this year’s Summer Olympics in Tokyo.

According to research compiled by the Alumni Association, at least 40 MIT alumni representing 13 countries have qualified, participated, or served as an alternate in 13 sports at 29 Olympic Games, including two alumnae who are first-time Olympians competing in Tokyo.

Alexis Sablone MArch ’16 will represent the US in skateboarding, and Veronica Toro ’16 is Puerto Rico’s first-ever female Olympic rower.

In total, based on Association research, MIT alumni Olympians have won three gold, five silver, and five bronze medals. Scroll down to see more MIT Olympic facts and the most up-to-date list of alumni Olympians.

Facts and Figures: MIT Alumni at the Olympics

MIT Alumni in the Olympic Games

This list includes MIT alumni who were Olympic coaches, Olympic alternates, and alumni who were members of the 1980 US Olympic team, which did not participate in the Games that year. MIT’s alumni Olympic records may be inexact. If there is alumnus Olympian that is not included in the list, please notify Slice of MIT in the comments below.

How about some designation for those who competed for MIT? Most of the Olympian alums with only graduate degrees never wore an MIT uniform.

Erland Van Lidth De Jeude may have been an alternate, but he was not on the '76 Olympic Team.

Nice article, Jay. Would also have been nice to see Henry Steinbrenner's name mentioned in the article. He is on the MIT full list of Olympians, though his class year ('27) is missing. I had the pleasure of meeting Henry at an alumni reunion in Boston the weekend Steinbrenner Stadium was being dedicated, in 1978. Had a great conversation with him that day!

You may want to consider finding stories from The Tech at the time these men and women participated in the Olympics and update your 2014 article with those links.

Didn't the US boycott the 1980 olympics?

Thank you for doing an article on this topic.

Janet Goldman '89 was a two-time Olympic speedskater, competing in Sarjevo 1984 and Calgary 1988.

Call the boathouse for other alumnae Olympians.

Apologies for the oversight. Accumulating a comprehensive list of MIT alumni who have competed in the Olympics is an inexact science! We will updated accordingly and your name to our ever-growing list. Thank you--Jay London

Thanks again! I will personally forward this information over to DAPER and ask them to add it to their master list. Any more names, please keep them coming!

Sorting Olympians by their college affiliation is a difficult process, especially during the 1980 games! Thanks again and we will updated Mark on our lists.

That's a great idea. We may add another designation on the full list of Olympians page that indicates that the athletes participated in the Olympics while attending MIT.

Olympic alternates proved especially tricky to confirm. Since they did not compete, this is no record of their participation. In Van Lidth De Jeude's case, we relied on a variety of sources, most notably a 1979 article in Sports Illustrated and a 1981 article in People magazine, both of which mention his Olympic participation.

Thank you for reading and please let me know if you have any additional Olympic alumni.

Thanks for your note. We do have Mr. Steinbrenner on our list but did not outright mention him in the story because it's been difficult to determine which events he participated in. Some articles reference his competition in the 220-yard hurdles but that event has never been contested in the Olympics. Also, there is no mention in any archived <em>Tech</em> articles or in Mr. Steinbrenner's <em>New York Times</em> obituary about his Olympic participation. The website www.sports-reference.com/olympics does not have him listed as a U.S. Olympian.

However, there are multiple articles that mention his Olympic participation, including the MIT News article that you reference. For that reason, we have kept him on our list. (I will add his graduation year.) Hopefully, we will find out more information about Mr. Steinbrenner's participation. Olympic records, especially in the early days, are very spotty, and we're working to find out more information. Thank you for reading and please let me know if you come across any additional MIT alumni Olympians!

Good luck Gwen! Please keep us updated! Thanks for letting us know.

Thanks for the addition. DAPER has Johnny Marvin listed as competing in 1956, not as a medalist. We'll make sure that gets updated.

I thought he qualified for the '80 games but US boycotted.

Hello! The US did not participate in the 1980 games in Moscow, but still recognizes anyone who qualified for the games as an official Olympian. Thank you for reading! --Jay

I represented Puerto Rico in the 1972 Olympics in Munich.

No apologies are needed. Thank you for all the fine work you are doing in recognizing us MIT Olympians.

The U.S. did not participate in the 1980 Summer Games but any athletes who qualified for the games were recognized and honored by the U.S. Olympic Committee.

Hello - Gary Piantedosi '76 and John Everett '76 are listed in the MIT Olympic History graph that we link to in the second paragraph. Thanks again! It was a tough list to collect, as there is no master database of MIT alumni Olympians.

Yes, Jimmy Carter withheld the US Olympic Team from the 1980 Moscow Games, in response to the Soviet invasion of Afghanistan. In return, the Soviets boycotted the 1984 Los Angeles Games.

Athletes selected for the 1980 Games are still considered Olympians. One example is rower Anita DeFrantz. (I think she rowed for Princeton.) DeFrantz would late go on to run LA '84, the non-profit that administers the 1984 Olympics' profits for Southern California youth sports. I had the pleasure of meeting her when I was President of the Southern California Speed Skating Association. DeFrantz would go on to become one of the first female IOC board members.

Thank you, Mike. I have contacted DAPER and asked to add Janet to the list. Thanks again!

Perhaps as a footnote, we should add that Oscar Hedland, MIT Track and Field Coach in the 1950's, though not an alumnus, was an Olympic miler.....ran in the 1922 Olympics, or sometime about then. He was a fine coach.
Joe Davis
Class of '61, Hurdles and High Jump

Jay, didn't MIT's track coach in the 1950s, Oscar Hedlund, have a connection with the Olympics -- maybe a runner back in the early 1900's. Seems to me that was the rumor.

It's still missing Erland Van Lidth De Jeude, '77 who went as an alternate to WRESTLE at Montreal in '76.

Also, the myth in the MIT weight room at the time was that the bent bar in the corner was left behind by Chris Taylor, Wrestling 1976. However, I can't find any historical information stating that he attended MIT. Perhaps you can look through MIT records to see if he was in fact, most likely, a graduate student.

The photo you have for Steve Tucker is actually his team mate, Greg Ruckman, who is actually an alum of that other school in Cambridge. :)

Hi! Steve had been misidentified in that photo. Thank you for the correction and thank you for reading! --Jay London

I am guessing that "Andrew Weaver MArch " may be a typo, also I was a classmate of Liz Bradley and I am almost certain her PhD (here listed as '82) did not come a year before her bachelor's in '83!

Faculty/Staff in the Olympics?

In the late 80s, Rafael Nickel, Gold Medalist in Team Epee for Germany in 1984, was a researcher and assistant coach for the MIT Fencing Team

Hi! We've updated our story. Thanks for your updates and thanks for reading.

If you are still tracking MIT Olympians, or have developed the MIT Olympians database you previously mentioned, please update to reflect his sport.

Olympian alumnus not included in the list - Nedzad Lomigora

There is an Olympian alumnus that competed in Lillehammer Olympics in 1994 in Luge sport representing Bosnia and Herzegovina.

You omitted Steve Cucchiaro '74 who was on the Olympic sailing team.
https://spectrum.mit.edu/spring-2010/giving-back-6/

Please reach out to me at londonj@mit.edu and we can include your name in the list. Thank you!

Thanks so much Jay for compiling this list and to everyone for contributing! This is so cool!

Nicole Freedman did not graduate from MIT in 1994. She transferred to Stanford after 2 years and graduated there. Source: me. I befriended Nicole when I got to Stanford for my Masters, we were on the cycling team together there, and one of my claims to fame is that over many dozens of town line sprints, Nicole only beat me once.