The Keys to the Fandom

Winnette McIntosh Ambrose ’98 is trained as a chemical engineer, but these days, you can find her on the Food Network for the second time—though she’s never taken a cooking class. Only 10 weeks into opening a high-end bakery in 2011, McIntosh Ambrose entered and won Cupcake Wars. She recently returned to the Food Network to show her skills on Chopped, the show that requires chefs to make a three-course meal using unexpected and often bizarre mystery ingredients—like goat brains or mashed potato candy. McIntosh Ambrose won the baking round of the Chopped Gold Medal Games on Jan. 23 and competed in the grand finals, making it to the second round. 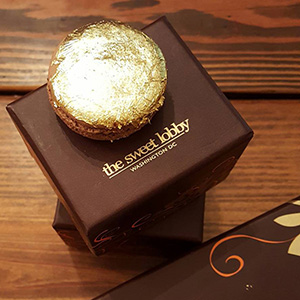 While studying abroad in Paris as a sophomore at MIT, McIntosh Ambrose fell in love with French pastries. “I went from a total nerd with no interest in anything culinary, to a total nerd who was very interested in recreating all the things I saw in pastry shops in Paris,” says McIntosh Ambrose, who earned a double major in chemical engineering and in foreign languages and literature, specifically French. It wasn’t until years later, however, that she turned it into anything but a side hobby, opening the Sweet Lobby, a French-inspired patisserie on Capitol Hill in DC.

The shop was immediately successful and her brother, Timothy McIntosh ’08, who helped her start the company, took the advice of locals and pushed his sister to enter Food Network’s Cupcake Wars. “My brother was very motivated to do a reality TV show and I was not, but he was able to prevail and got me to say yes,” says McIntosh Ambrose. “We submitted a video and with half an hour we got a call back and were casted.”

After graduating from MIT, McIntosh Ambrose worked for about five years in medical device design before returning to school to earn her PhD in biomedical engineering at Johns Hopkins University, where she focused on biomaterials and stem cells. At first, she ran the business while working on medical devices at the National Institute of Health—but after winning Cupcake Wars, demand for the business skyrocketed and she decided to take the opportunity to pursue the business full time.

“One of the things I learned to do well as a scientist was scaling up, emphasized in chemical engineering,” says McIntosh Ambrose. “Taking a design from inception to scale up and manufacturing, going from smaller production to increasing our production capacity. I had the opportunity to delve into entrepreneurship, mentor staff in their careers, and grow a company from zero to where we are now.”

The company has gone from five to 35 employees; it supplies numerous lines of pastries to stores across the country, including Whole Foods’ and local DC coffee shops; and it has grown to be the largest producer of French macarons in the Mid-Atlantic. In addition to the Sweet Lobby storefront, McIntosh Ambrose also owns and manages a production facility and a globally inspired market and bakery in DC called Souk.

When asked how she first got into cooking, McIntosh Ambrose credited her husband, Ricardo Ambrose ’98, and their years at MIT. “He actually has been cooking since long before we met,” says McIntosh Ambrose. She and her husband, both from Trinidad and Tobago, met their first year at the Institute. “At MIT, he was the one who could cook and bake. So we started cooking together to survive the MIT cold.”

If you’ve ever seen the Food Network’s Chopped, you know that it requires talent, ingenuity, and the ability to think fast. McIntosh Ambrose’s background has prepared her for high-stress situations. “I love a challenge; clearly, I went to MIT,” says McIntosh Ambrose. She even flew up to Boston for MIT’s 100th anniversary of MIT’s move to Cambridge and provided pastries for 8,000 people just five weeks after having a baby.

“Chopped is everything that it appears to be on TV and then some,” says McIntosh Ambrose. “It is high stress, super intense, the time limitations are just crazy, and you will be pushed to work with some really wild things. The competition is real—I mean you go up against people with some real culinary chops. It is not something to be underestimated.”

The Keys to the Fandom

Celebrating the Winners of the 2020 MIT Alumni Leadership Awards