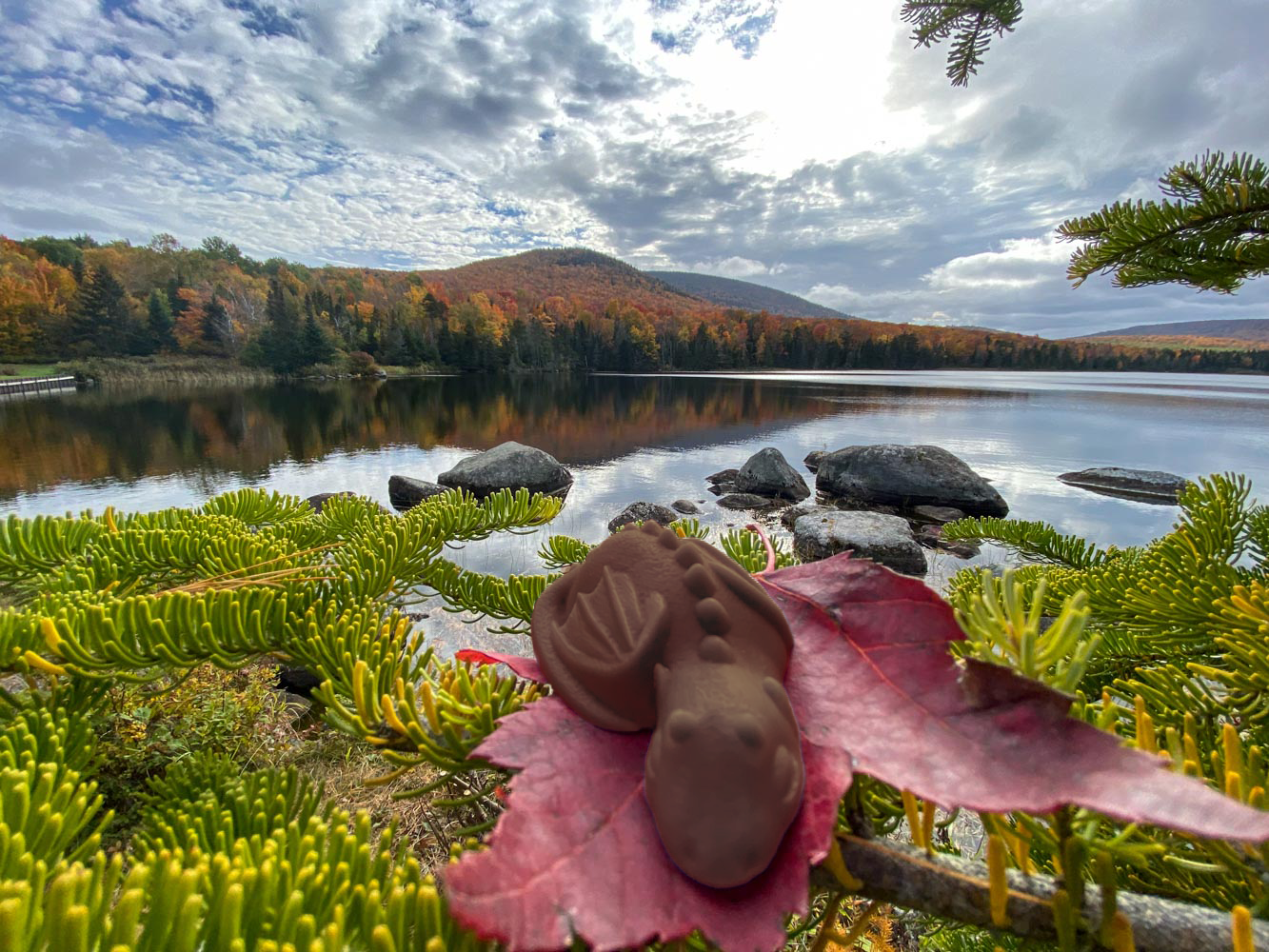 If the MIT Laboratory for Chocolate Science sounds like a nerdy student’s daydream, that’s because it is. The 2003 brainchild of alum Ariel Segall ’04 and their classmates, the still-active student group has run events providing hot chocolate during final exams, truffle classes over January’s Independent Activities Period, lectures on chocolate science, and of course Valentine’s Day parties. We “fed people chocolate basically to make them happy,” remembers Paul Weaver ’12, for whom the lab’s activities were an MIT highlight. “We ordered it by the quarter ton.” It was an experience that left an enduring mark on Weaver’s life. That includes his recent choice to take the reins as president at Dark Matter Chocolate, a sweets company for and by nerds founded by fellow chocolate-lover Segall.

Dark Matter’s nerd credentials are well established. Segall started the company more than a decade ago as a hobby, selling fantasy-themed chocolates at science fiction/fantasy conventions to hungry fans eager for a sugar fix. Weaver and Segall (who are joined as co-owners by Elizabeth Krueger '14 and Meghan Reedy '09) met around that time through the Assassins’ Guild, an MIT student group devoted to LARPing (live action role playing). The company's website is replete with Harry Potter references and physics jokes.

Weaver joined the company as Segall was looking to scale up production. He was excited by the opportunities chocolate presented for science and exploration—from perfecting the tempering process to get the glossiest result with the best snap from among chocolate’s six crystalline states, to addressing the engineering challenges of manufacturing custom molds.

Under his guidance, the company built up a massive inventory between 2019 and 2020 and was starting a lucrative convention tour when the Covid-19 pandemic hit. With large in-person gatherings paused indefinitely, Dark Matter attempted to sell that inventory through a website. Weaver quickly realized that online chocolate sales are extremely seasonal, which made supporting year-round business difficult. And the diversity of custom molds and quirky flavors that had cultivated a passionate following became an obstacle in the virtual realm, with too many unique products to keep in stock at any given time. The company had to pause business altogether twice—once during the mail slowdown at the beginning of the pandemic, and again from January to September 2021 as it tried to decide where to go next.

The answer: nerdy chocolate subscriptions. Subscribers to Dark Matter Chocolate’s new monthly boxes can choose from a combination of fantastical flavors and shapes, customized for preferences and allergies. The first month’s offerings showed off the company’s custom water-themed chocolate molds in the shape of a kraken (an enormous squid-like sea monster), a selkie (a shapeshifting seal from Celtic mythology), and a hippocampus (a fish-tailed horse from Greek tradition). Featured flavors included Holiday Spice (allspice, ginger, cinnamon, cloves, nutmeg); Weasley (ginger and raspberry); and Toffee Toffee Toffee (toffee!). Weaver anticipates that an upcoming fire-themed menu might feature an array of hot-pepper chocolates and a dragon or phoenix.

One challenge unique to nerdy chocolate design is the medium itself, Weaver says. The selkie from Dark Matter’s first subscription box was ideal because it was so smooth and simple. The dragon, on the other hand, had to be sleeping with wings folded because outstretched wings would be sure to break during fabrication. He fears the feathering on a phoenix might well be too difficult for a machine to manage.

Feeding people chocolate is a way to connect with them.

Still, he would never dream of moving away from the fantasy themes that first got Dark Matter Chocolate attention. “It can be a little polarizing,” he acknowledges of nerd identity, but finding a specific niche is better “than trying to reach everyone and not doing a good job of that.” Drawing on the real passion for fantasy he shares with his customers makes the brand more authentic. “Food is a good way to share experiences,” Weaver says, adding, “Feeding people chocolate is a way to connect with them.”

Are you celebrating a milestone anniversary of your MIT graduation like Paul Weaver and the Class of 2012? MIT Tech Reunions will take place as a multiday in-person on campus event May 27–28. Save the date and reserve your hotel room today.