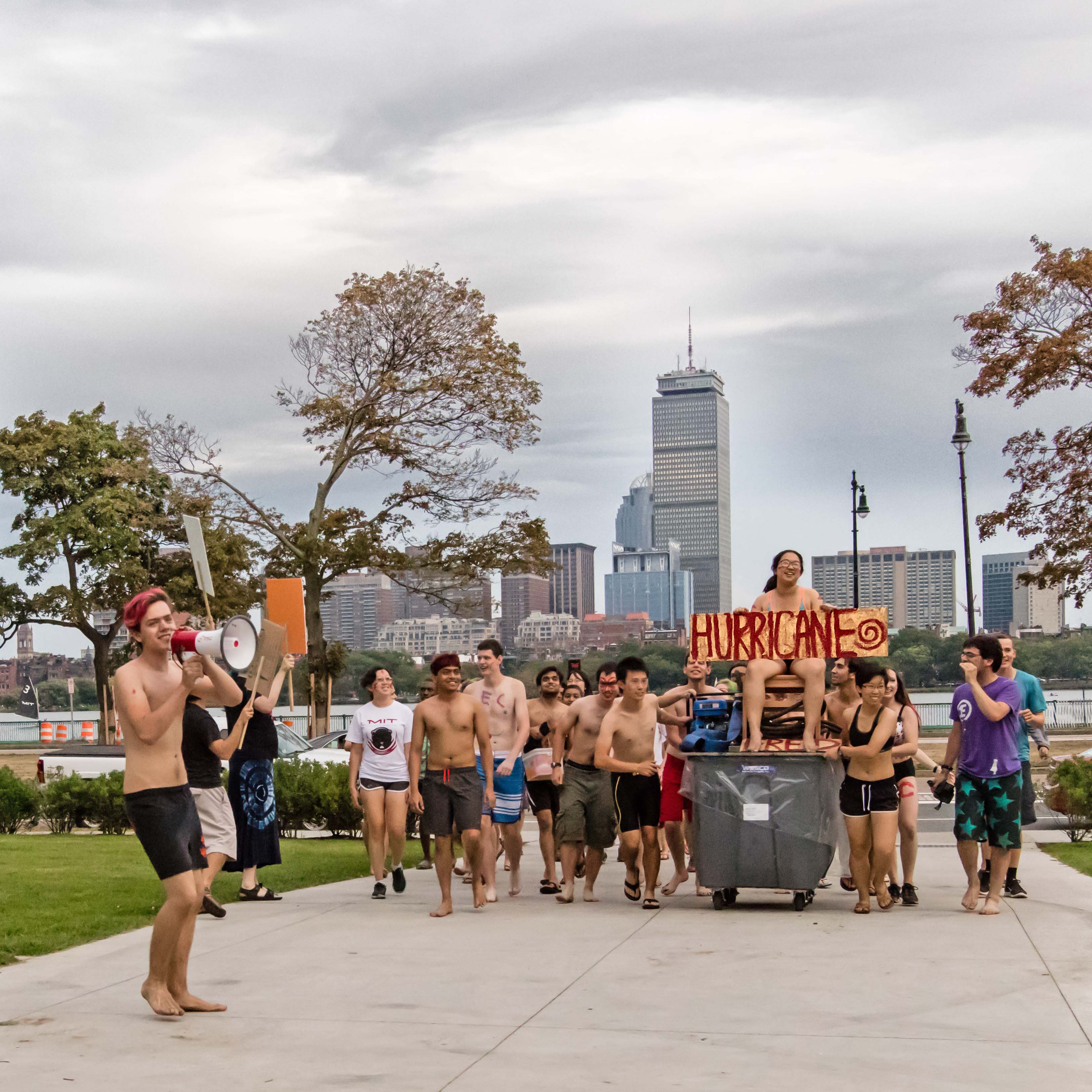 The idiom “wet behind the ears” may be a good way to describe new MIT students because, thanks to several  MIT traditions, students spend their first few days on campus getting soaked.

Many people know about the swim test that first-year students take during orientation, but soon after students dry out, it’s time for another wet MIT tradition—the water war. The annual water war is an official part of Residential Exploration (REX) that began at MIT in the early 2000s. The war pits east campus against west in a battle on Killian Court that combines water balloons with student ingenuity.

The war is a carefully orchestrated event. With the help of the Dormitory Council, REX chairs help to coordinate the event each year. Henry Shackleton and Yanisa Techagumthorn, REX chairs from East Campus, explain that scheduling can actually the most challenging part of the war. “Finding a time for the water war can be hard—there’s a lot of events during REX. But once it’s on the schedule people start to prep,” says Techagumthorn. This prep includes filling balloons, designing catapults, building duck chariots, and creating a contraption known as Hurricane Fred—a long plastic dumpster turned water hose built by East Campus students.

While almost every dorm participates in the war, Shackleton and Techagumthorn say the biggest showing each year comes from East Campus, Next House, and Simmons. “But East Campus always wins,” Shackleton laughs. With serious equipment like water hoses, it’s no surprise that the war usually doesn’t last more than 10 minutes before being called—but it does include some great pageantry. “We usually give a dramatic speech to assemble to troops at the dorm,” Shackleton says. Once all dorms arrive at Killian Court, REX chairs from east and west campus meet in the middle of the court, shake hands, and announce a start to the war. Despite the intensity, the water war comes with some battlefield reunions. “You might see people you haven’t seen all summer. You say, ‘Hi,’ and throw a water balloon at them,” Techagumthorn says.

While the war is for current students, a small audience forms around it each year. David Bragdon ’62 caught the East Campus crew preparing for the war and was intrigued. “He saw what we were doing and followed us down to the war,” explains Techagumthorn. “I was embedded with the troops,” Bragdon says. This embed gave a him a front row seat at how the war ended earlier this year. “At the end, peace broke out with all of us chanting ‘MIT, MIT, MIT!’ It was very moving,” he says

While the water war is friendly combat, Techagumthorn says there are a few casualties each year—in the form of brass rats. “We get a ton of emails about people losing theirs,” she says. Despite the potential ring loss, the war has a big appeal to students new and returning. “I love the water war. It was the first time in my freshman year that I got a sense of some sort of community. It’s a great tradition that I’ve enjoyed,” Shackleton says.

Mariahs should be made using NR latex tubing. I described one to someone when I was a grad school and laughed when he tried to make one from Bunsen burner hose. Black rubber hose has a seam and can easily burst getting the Mariah-maker a lot wetter than the intended victim.

Near the end of the 1950s, during my first year and first week as an undergraduate in East Campus (in Wood, 4th Floor - no longer referenced in that way), I was awakened and baptized around 2 AM to a discharging, swollen Bunsen Burner tube, carried like a giant Python by at least 3 laughing figures.

Later, I learned the night attack was a tradition by sophomores (not seniors, who tended to protect us from sophomores) and the tube was called Maria (pronounced Mariah) after the then popular Kingston Trio song "They Call The Wind Maria." I also found out from a senior how to make my door more secure.

In those days, after one extreme water fight gone nonlinear, water gushed down the stairs of Munroe in a waterfall.

There are many bizarre water-related stories in East Campus history. I understand that EC alum "historians" (as well as a few current EC residents) have been including the tales as they collect legends from the last century.

Brings back fond memories! As a freshman I was promptly introduced to the science of Mariahs. Typically you got the tubing from the chem lab supply office, which required approval by your prof. So I went to get the supply slip signed, and he asked me, "What do you need it for? Water fighting?" "Er, uh, yes..." "What dorm do you live in?" "Burton." "Oh, OK then." And he signed it. He was house master at Baker.

Later on we discovered Howe and French (mail order supply house) and bought our own. The stock MIT lab supply hoses were 1/4". We got 1/2" heavy wall rubber tubing and made monsters. They had a range of 20-30 feet, held a gallon of water, and could get rid of it in 3 seconds. Very very effective. When I came home for the summer I used one to help my father clean out the gutters. It made a garden hose look like a squirt gun.

BTW, Emil is right - you need to use the amber colored latex tubing.

Thanks David for refreshing my memory with the term "Maria"! That, indeed, was the term!

David’s note reminded me about the extreme water hazard encountered especially by Freshmen in East Campus. I lived on 4th floor Munroe as a Freshman in 1958 and the Sophomores showed no mercy. I was only on the receiving end of Mariahs and so know nothing about proper tubing other than to observe that they seemed to be quite effective in spraying water. Of course, the next year we had our revenge with the new freshman!

In the early 1950s, East Campus (at least Walcott) had a 10 PM tradition of taking tubing from Bunsen Burners and tying a knot at one end and filing the tubing with water from the other end. Then running around the floors with this "bazooka" looking for an unsuspecting colleague to dose with water. The floors dripped with H2O as did the stairwells. This blow-out lasted 10-20 minutes and then the "monks" returned to their cells to continue to solve problem sets.
However, the best water fight occurred on a Friday one spring, when the good MIT Administration folks in their infinite wisdom decided to raise room and board costs, tuition fees, and to reduce services all in the same letter delivered to the campus residents! Not too smart! In the early evening a fire was started between Walcott and its sister building across the way. When the good lads from the Cambridge FD arrived, hoses in the buildings were aimed at them and the valves opened. Needlesstosay, they were not amused nor were the Cambridge PD, who arrived on the scene. Shortly thereafter, the MIT Police Department was formed.
Dean Fawcett, who lived nearby at 100 Memorial Drive, was an exceedingly kind and well-tempered soul letting us have our fun.

Sounds a lot less destructive and more fun than the water wars during the East Campus Days of the early 60's.