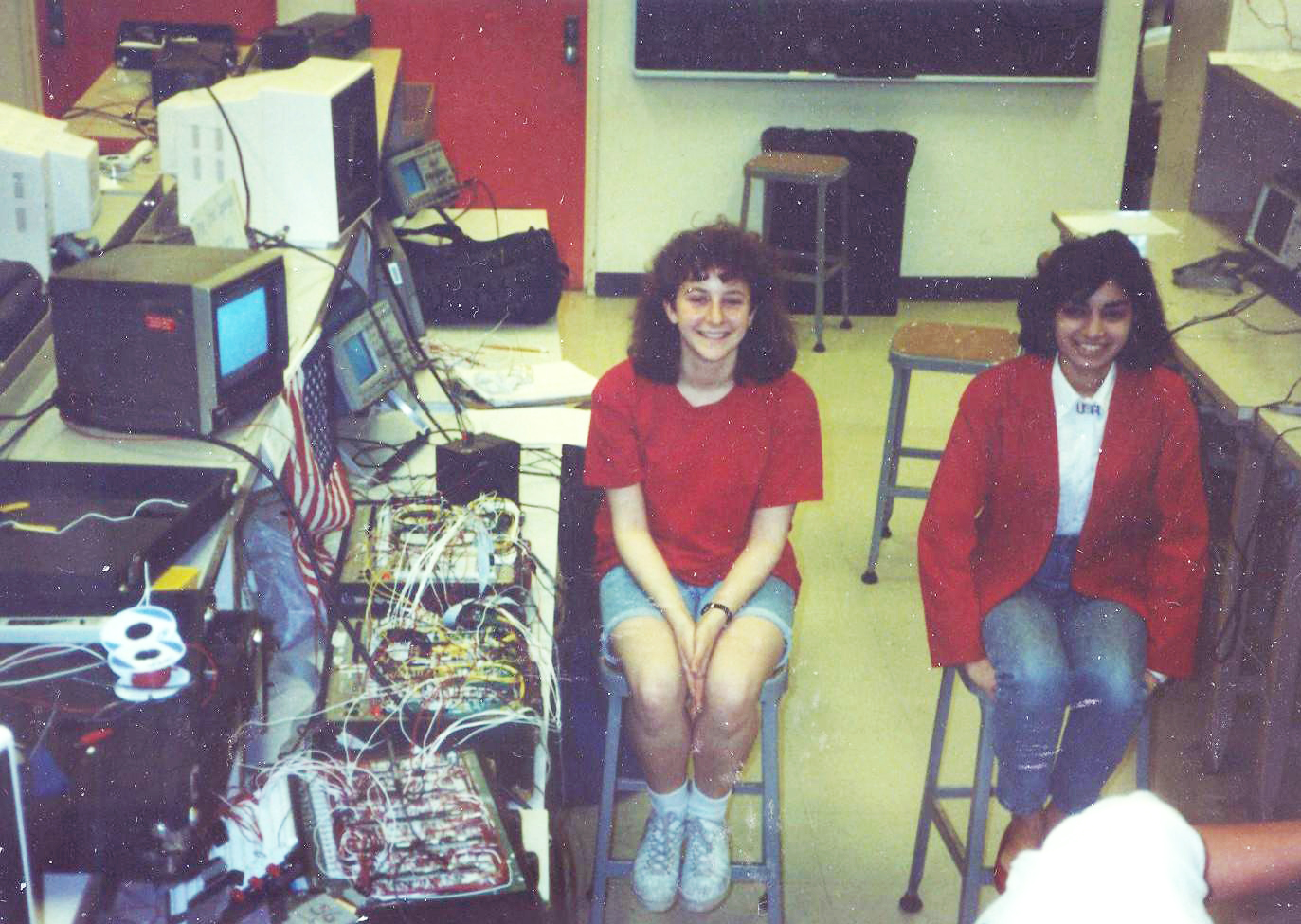 Susan (Margulies) Beiter ’92, MS ’93: “This picture is from MIT’s Intro to Digital Design Laboratory, 6.111, which was taught in the spring of 1991 by Professor Don Troxel. The other person in the picture is Mariam Tariq, also Class of 1992. We were freshman roommates in McCormick Hall and two out of only a handful of young women who majored in electrical engineering in the Class of 1992. 6.111 was my absolute favorite class at MIT, and it has defined my 30-year career as a digital design generalist. The class made me feel like I was on the cutting edge of technology, and was a good class for learning that computers can only do what we the designers make them capable of doing.

“The photo was taken in the lab, which was on one of the upper floors of Building 36. We were presenting our final project, ‘The Star-Spangled Sing-a-Long,’ where we had designed, built, and programmed a synthetic accompaniment for people singing ‘The Star-Spangled Banner.’ It was a play off of current events: We designed our final project in the spring after Roseanne Barr had a summer 1990 ‘viral’ moment (before viral things existed), where she rather irreverently butchered the anthem at a baseball game, so we came up with the idea of a machine that could transpose the anthem into any key and also change the tempo to suit the performer, to make it easier for anyone to sing the anthem. I think there was also a video component of a basic monitor that showed the lyrics to direct the singer.

“The ‘nerd kits’ that you see in the picture with all the wires were the way we would design our ‘breadboard’ circuits in the early days of more highly integrated circuit technology. They looked like little brown suitcases, and we carried them around campus with typical MIT nerd pride.

“Funny story about this project. Mariam had taken her empty, unwired nerd kit home with her for spring break and used some of her vacation to wire it up. When she went to fly back to MIT after break, she needed to show a letter from the professor to the airport security in Atlanta to bring this briefcase full of wires on her flight! It is probably a good thing this was a decade before the revamping of airport security, otherwise she probably would have had to unwire the whole project and start over again back on campus.

“MIT is one of my favorite places on Earth (no exaggeration). I really loved my time there as an undergrad and my year of grad school, plus staying connected for another decade through activities on campus (through music and sorority advising). I still love talking about MIT with seniors who are applying to the Institute through my role helping with the admissions process as an educational counselor.”

Susan Beiter lives in New York with her husband, Damon, and their two sons. She is the founder, owner, and staff engineer at Eleven Eleven Embedded Solutions, LLC, an electrical engineering design-services firm specializing in software for embedded processors and firmware for FPGAs.

Are you celebrating a milestone reunion like Susan (Margulies) Beiter ’92, MS ’93 is? Learn more about MIT Tech Reunions, May 27–29 on MIT's campus.