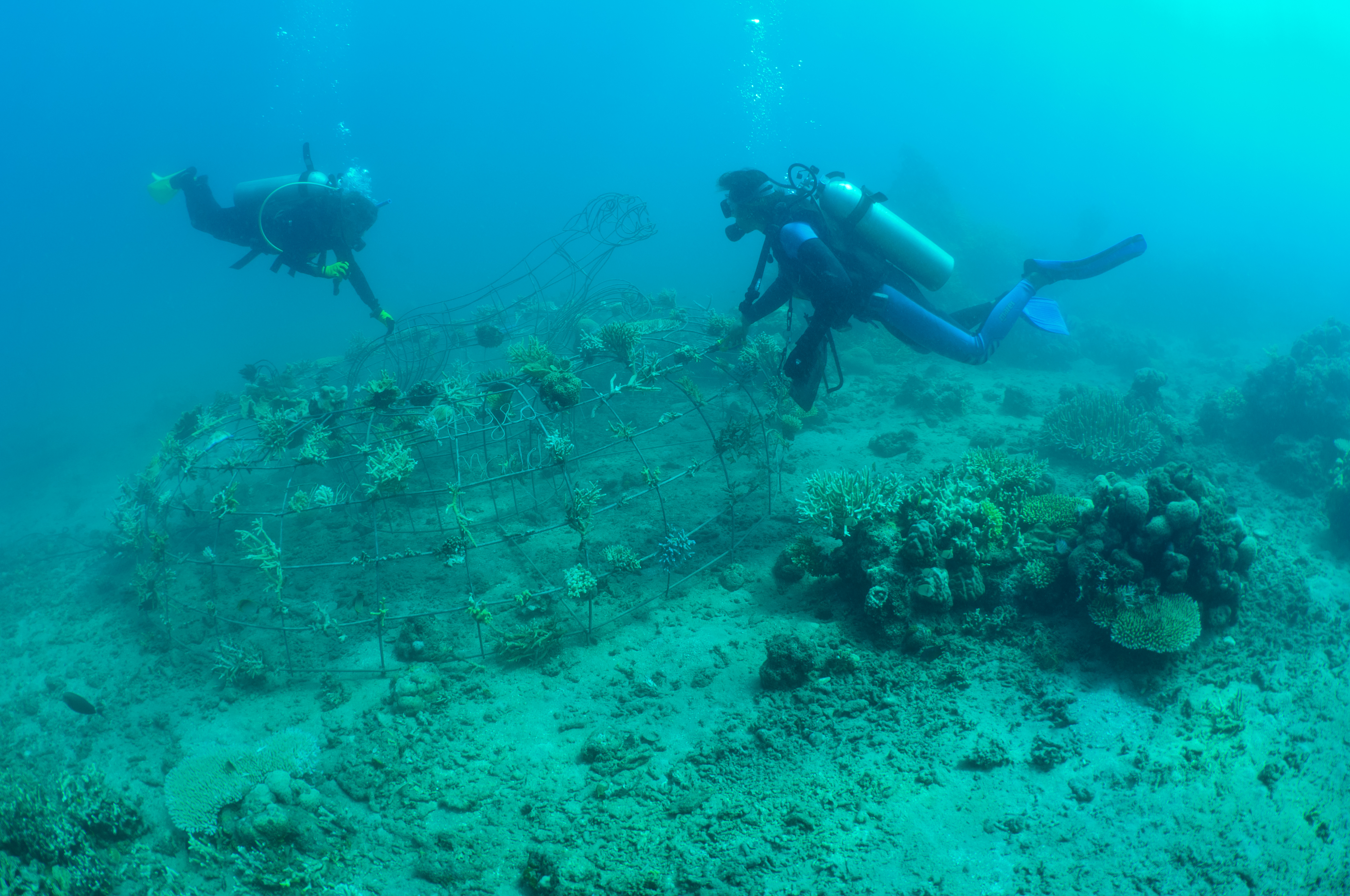 As soon as he could walk, Tom Goreau ’70 was swimming in the warm waters off Jamaica, where he grew up. He recalls water so consistently clear and blue he could see all the way down to the corals and marine life blanketing the bottom. His dad would dive below, releasing streams of bubbles that Goreau would follow. This was the 1950s, before scuba gear was commercially available. So Goreau’s father—Thomas Fritz Goreau, considered the first diving marine scientist—built equipment from scratch that allowed him to dive as deep as a few hundred feet. “He probably held the world’s record for depth diving on compressed air at the time,” says his son. Goreau’s grandfather, Fritz Goro, was the inventor of macrophotography—featuring extreme close-ups of small objects—and the first to use it underwater. Together, Goreau’s grandfather and father took some of the earliest photographs of corals. His mother, Nora Goreau, also had a notable link to the sea: she was the first Panamanian marine biologist.

Goreau—whose family’s story is told in the new documentary Coral Ghosts—has borne witness for seven decades to the steady global decline of coral reefs, which have degraded into fields of rubble and algae. “My expertise is knowing how the reefs used to be,” he says. In a word—magnificent. “And now they’re essentially gone, like Hiroshima looked the day after the atom bomb.”

My expertise is knowing how the reefs used to be. And now they’re essentially gone.

In the 1980s, building on his undergraduate degree in planetary physics from MIT (and graduate degrees from Caltech and Harvard), Goreau pioneered the use of sea surface temperatures collected by satellites to predict at what point corals would bleach. But we’ve far surpassed that threshold. Climate change has cooked and bleached the corals. Ocean acidification has dissolved them. And local pollution has sealed their fate.

As president of the nonprofit Global Coral Reef Alliance (GCRA), Goreau helps local and indigenous people identify which stressors are killing their local reefs and how to reduce that negative impact. He targets his message to the oldest fishermen “because they’re the only ones who remember how it was,” he says. Young audiences are less receptive—their elders’ stories of teeming ocean life are like myths to a generation that knows coral reefs as feeble places barely capable of supporting a few small fish.

But Goreau has found a way to help: a system he adapted, called Biorock. He and his small GCRA team weld together webs of steel rebar, plunge them underwater where the reefs once stood, and run a current through them. Over time, a thickening crust of limestone grows to blanket and strengthen the web. They graft coral fragments onto it, which continue to grow and sometimes overtake the original structure. The result attracts numerous marine creatures and protects eroded beaches from waves (as the reefs once did). Biorock can also be used to restore other marine habitats such as seagrass and salt marshes, Goreau notes. It’s a means, he explains, of “regenerating the ecosystem and working with people who are trying to save the last bit of what they have.” He’s constructed about 700 of these artificial reefs and is hopeful they might help, in some small way, to turn things around.

One place he’s set up shop is the Marshall Islands, in the central Pacific. In the 1940s, the inhabitants of Bikini Atoll were forcibly evacuated to the other islands so the United States could test its atomic bombs. Today, Goreau hopes his electrified reefs can protect these islands from flooding and sea-level rise. Bikini Atoll was also the place where, decades ago, his father and grandfather began their photography work. Some 25 years later, while Goreau was studying at MIT, his dad—like many of the displaced people of Bikini Atoll—died from accumulated exposure to the radiation.

The underwater world Goreau knew as a boy, and all it was filled with, is long gone. This leaves him feeling “very much like someone who is the last member of a dying culture,” he says—a man who knew an ocean that now exists only in his family’s albums of fading photographs.