From Killian Court to the Touch Rugby World Cup 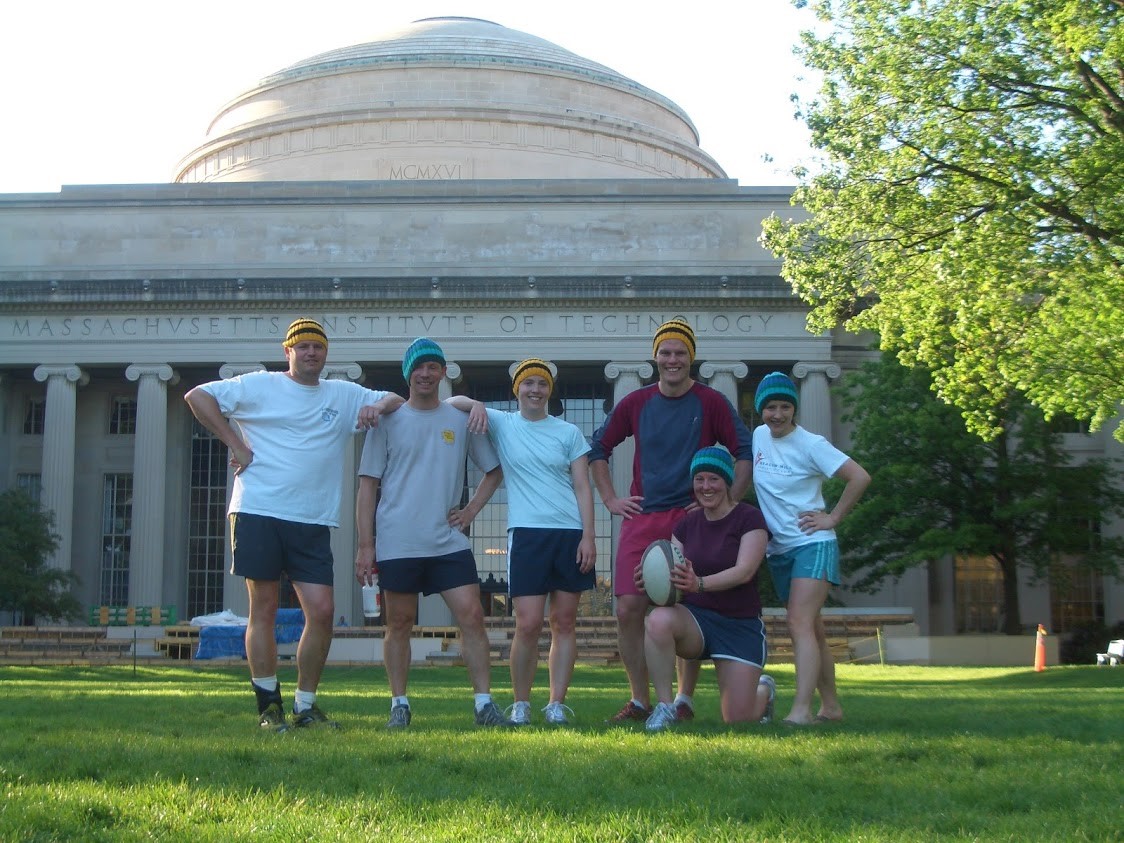 This spring, when Paul Ayers SM ’01 laces up his cleats and takes the field to represent the United States at the 2019 Touch World Cup in Malaysia, perhaps no one will find it more surprising than Ayers himself. For him, it is the latest twist in a touch rugby journey that started almost two decades ago with pickup games on Killian Court. Now, he is playing at the sport’s highest level, all while working full-time as a chemical engineer and raising a family. Fortunately, Ayers is taking it in stride. “I like being busy,” he says with a laugh. “I find it quite motivating—it makes me get more done in a shorter period of time because I have to.”

Ayers grew up in South Africa, where most people, including Ayers, start out playing tackle rugby. It wasn’t until Ayers started his master’s degree at the MIT Chemical Engineering Practice School that he was introduced to 6-down touch rugby. “Touch is the social version of the game, because your size doesn’t matter—if you’ve got a set of hands and you can catch the ball, you can play,” he explains. “It’s basically like the flag equivalent of American football.”

Ayers and a group of graduate students and MIT affiliates, many of them fellow expatriates, began playing pickup games on Sunday afternoons and Wednesday evenings, claiming a patch of grass on Killian Court in front of the dome. Afterward they’d make the short trek down Memorial Drive to the Muddy Charles Pub, often still muddy themselves. The games happened year-round, canceled only for ice (but not snow) and MIT Commencement. “It was purely social—we were all out there to have fun, get a great load of exercise, and then we’d go drink afterwards,” Ayers recalls.

Ayers and a group of mostly fellow expatriates began playing pickup games on a patch of grass in front of the dome. Afterward they’d make the trek to the Muddy Charles Pub, often still muddy themselves.

Meanwhile, after a grueling year of Practice School, Ayers landed at W. R. Grace in Cambridge, where he put his chemical engineering skills to use as part of the company’s continuous improvement organization. “Basically, they give you an undefined problem”—for example, increasing production of a can sealant—“and your job is to define the problem and develop and implement a fix,” he explains. One upside of staying in Cambridge was that Ayers spent the next decade continuing to play pickup touch rugby at MIT.

Eventually Ayers relocated to New Jersey for a similar role at the German chemical company BASF, where he still works today in the catalyst division. There, he tackles problems related to the manufacturing of process catalysts, including the materials used in automobile catalytic converters. He found a new touch rugby outlet when a team started in the nearby town of Maplewood, and from there, as Ayers tells it, a series of unexpected events set his athletic trajectory. His team joined the USA Touch organization, and was so good at signing up social players that it quickly became one of the largest registered touch rugby clubs in the US. While scouting teams in New York City, leaders from USA Touch ventured to Maplewood to see this big, new club that was playing at 8 a.m. on Sundays (the time slot approved by players’ families).

Paul Ayers (right) will play for the US in the touch rugby World Cup this spring. Credit: USA Touch.

Soon afterward, Ayers was invited to the 2016 USA Touch National Championships in Disney World. “I had never played a competitive game of touch rugby in my life, so that was a completely eye-opening experience,” he says. He quickly discovered that competitive touch is more structured than pickup: Teams play six players per side, slotted into three distinct positions (middles, links, and wings), and sub on the fly every 30 to 60 seconds, ice hockey style, using set plays on six attempts to move the ball down the field into the “try zone.” Before long, Ayers was hooked, often finding weekend tournaments while traveling for work, and he returned to the national championships the next two years. When USA Touch chose its men’s 40s (age 40 and older) roster for the 2019 World Cup, Ayers made the list.

In April, he and 15 teammates will travel to Kuala Lumpur with six other US squads to convene with teams from 28 countries. And while Ayers is looking forward to the intense competitive atmosphere, his personal goals are more modest: “I want to live the experience, just like one does with MIT’s Practice School, and make it to the end more or less in one piece.”