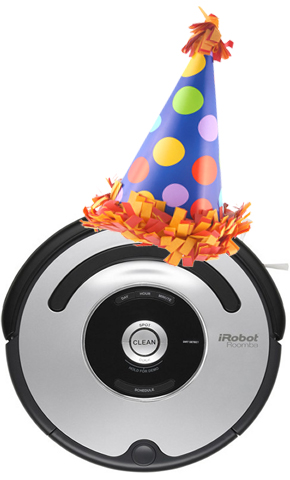 Chip Chick, a blog devoted to “Tech and Gadgets from a Girls’ Perspective,” is saluting the 20th birthday of an MIT alumni business success, iRobot. Here is their shoutout:

“In the 90’s two MIT grads, Colin Angle ['89, SM '91] and Helen Greiner ['89, SM '90], and their MIT Professor, Rodney Brooks, joined forces to make practical robots a reality and 20 years later they are still at the forefront of technology with new and exciting ways to not only help us in our homes but in healthcare, research, and education. It all started by them winning the NASA Group Achievement Award from designing a behavior-controlled rover for NASA. This led to the Sojourner exploring Mars in 1997. In 2002, iRobot launched two robots that would ultimately cement them into our culture, the Roomba floor vacuuming robot and PackBot tactical mobile robot. Five million robots from the household line of vacuum robots have sold worldwide, making it the best-selling consumer robots in history. 3,000 units of the PackBot have also been dispatched to the military and as well as civilians worldwide.”

You can celebrate virtually by watching a Packbot music video created by the band Landsdowne and iRobot that shows off the Packbot at work deactivating bombs and such.