A Calculated Approach to Winning the Lottery 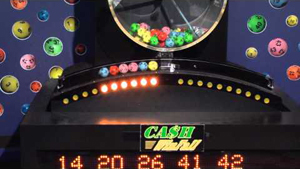 When playing the lottery, there is usually one goal: hit the jackpot, claim the cash. But a group headed by then-MIT students took a different approach and won millions from the Massachusetts State Lottery–without ever needing to hit the elusive six-digit prize.

James Harvey '05 was looking for a senior independent study project during his final semester when he came across the Massachusetts State Lottery game Cash WinFall. Unlike traditional lottery games, Cash WinFall’s biggest prize did not exceed $2 million. If the six-number jackpot was not won–which occurred almost 99 percent of the time–the $2 million prize was "rolled down" into smaller prizes that matched four or five numbers, sometimes increasing those prizes tenfold. Harvey determined that, during a "roll down," each lottery ticket was worth more than it costs.

According to a report from the Massachusetts inspector general, on February 7, 2005, Harvey placed $1,000 worth of bets. After a $2 million jackpot passed with no winner, he won $3,000. Soon after, he and Yuran Lu '05 incorporated Random Strategies Investments, named after MIT’s Random Hall, and began attracting investors.

The group eventually determined that if they purchased at least $600,000 worth of tickets during a "roll down," they could garner an average profit of more than 15 percent. According to the report, the group earned an estimated $3.5 million over seven years.

In August 2010, Random Strategies won nearly the entire Cash WinFall prize in a single drawing, purchasing 700,000 $2 tickets and cashing in 860 of the 963 winning slips.

…The biggest headache of (Harvey’s) system was finding places to actually place his large volume bets (running hundreds of thousands of tickets can tie up an employee for hours), filling out each betting slip by hand (computer generated slips are illegal), and correcting for other variables like weather (if it was too humid, the machines could jam), among others.

The report identified other groups who profited from the game, including a team of scientists from BU and Northeastern, and confirmed that high-volume betting did not adversely affect other players’ odds of winning.  The report acknowledged that lottery officials did not enforce rules that made high-volume ticket purchasing more difficult because it was financially advantageous to the lottery and the practice is legal.

Unfortunately for would-be players, the lottery restricted the number of tickets any store could sell in a day in 2011, and the game was stopped earlier this year.