Each year, thousands of MIT alumni, students, parents, and friends unite on one day for an important reason: supporting the MIT community’s commitment to solving the world’s greatest challenges through education, research, and innovation. Join us this year on March 12, 2020, for the MIT 24-Hour Challenge.

On a chilly Tuesday morning in January during MIT’s Independent Activities Period (IAP), the murmur of hundreds of students and alumni filled Morss Hall in Walker Memorial. They were preparing for day two of the signature team training workshop run by the Undergraduate Practice Opportunities Program (UPOP). The previous day had kicked things off with a challenge to each team of sophomores to build a skyscraper using only sharpened pencils, foam blocks, and duct tape. Now the groups were reconvening for a second day’s schedule packed with sessions titled “Team Creativity” and “Whole Brain,” as well as time blocks set aside for networking and group discussion.

UPOP, which started in 2001, offers sophomores direct access to MIT alumni who want to prepare the next generation of great technical minds for professional success. The weeklong, alumni-led training during IAP—focused on helping students learn about communication, teamwork, and problem solving—is the flagship offering of the program’s yearlong schedule of seminars and workshops.

“Most MIT students come to MIT because they want to tackle the world's most complex and challenging problems,” says Reza Rahaman SM ’85, PhD ’89, industry co-director of the Gordon-MIT Engineering Leadership (GEL) Program, which manages UPOP. “Seeing how people who were sitting in their seats so many years ago have done many of the things that they want to do is both instructional and inspirational.”

Seeing how people who were sitting in their seats so many years ago have done many of the things that they want to do is both instructional and inspirational.

Students participating in the IAP workshop are divided into teams of eight. Each team is assigned a mentor from the working world, many of whom are MIT alumni. The groups spend the week devising solutions related to a major global issue of their choice, such as food insecurity and rising sea levels, then present their ideas to the larger group.

The Tuesday morning session on team creativity–led by Wall Street veteran Ralph Inglese ’82–focused on the types of critical thinking used in collective brainstorming. Each cluster of students brainstormed ways to tackle their chosen challenges. They first used traditional free-flowing idea generation. Mentors then produced an envelope full of seemingly unrelated prompts—words like “coal,” “nose,” and “chocolate”—to get students to consider their challenges in unconventional ways. They grouped all of their thoughts into broad categories, then evaluated them to determine their approach for the rest of the week. All the while, mentors gently guided students and pointed out how and when such brainstorming techniques are useful in a professional context. 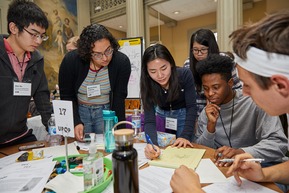 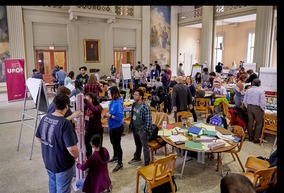 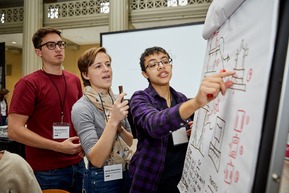 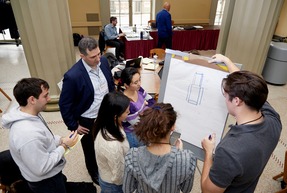 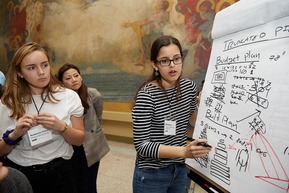 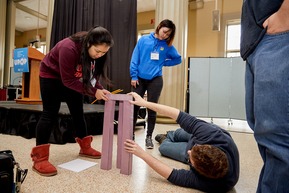 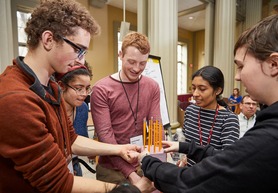 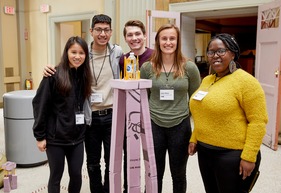 Skills for the Workplace—and Beyond

Since most students in their second year don’t have extensive experience in their fields, internships can be difficult to secure. UPOP arms sophomores with many skills employers find valuable, and employers in the MIT network recognize that a UPOP-trained sophomore can be a powerful asset. To actively help sophomores obtain internships, UPOP has established partnerships with hundreds of these employers, and holds career networking luncheons and info sessions to connect students with them throughout the year.

Creative teamwork is just one of the professional skills that students who enroll in UPOP sharpen throughout their sophomore year. At the start of the program in the fall, participating students strengthen their resumes and participate in mock job interviews to help prepare them for finding summer internships. Additional workshops during both semesters cover the ins and outs of professional conduct, such as Fall 2019’s seminar on how to handle tough negotiations.

Jen Pinson ’98, a longtime UPOP alumni volunteer who is chief operations officer of the Business and General Aviation Division at GE Aviation, describes the program as “a jumpstart on [understanding] the roles, responsibilities, and expectations of the workforce, and adding more tools to the toolkit.” She believes she’s not alone among alumni in wishing something like UPOP had existed when she was a student. “That would have been a powerful experience to have had before we went into careers in industry,” she says. This year, Pinson is supporting UPOP on an extra level through the MIT 24-Hour Challenge, which will be held this year as a “pre–Pi Day” event on March 12. Pinson has pledged to donate $15,000 if 80 people make contributions of any amount to UPOP during the all-day fundraising event.

The tools students hone in UPOP also have applications beyond the workplace, says Rahaman: “Students will use these skills in their classes, in their living groups, in their research experiences, in their internships,” he notes. “There is a growing recognition that communication, teamwork, and problem-solving leadership skills are not additive, but rather a force multiplier for technical skills.”

UPOP strives to create a welcoming environment that encourages students to share their ideas with confidence, even if that’s not what they’re used to. Rahaman says students going through the program have found support from their peers and mentors in overcoming personal insecurities—such as a fear of being wrong in a place like MIT. “UPOP gives them the ability to practice and develop skills that may not come naturally to them,” he says, “in a truly safe space with a community and cohort-based approach.”

You can always get advice from your fellow students, but they don't really know what it's like to be on the other side.

The Rewards of Mentorship

After the Tuesday morning brainstorming session during this January’s workshop, students separated from their teams to listen to mentor roundtables on such topics as recovering from failure (led by Paul Green ’73), work-life balance (led by Mariquita Blumberg ’94), career opportunities (led by Rahaman and fellow GEL faculty member Joel Schindall ’63, SM ’64, PhD ’67), and being a woman in a male-dominated field (in a session led by Pinson).

“We all care about getting jobs, we're talking about it, we're thinking about it,” says UPOP participant Shuli Jones ’22, whose team analyzed the efficacy of drone use in animal conservation efforts. “You can always get advice from your fellow students, but they don't really know what it's like to be on the other side.”

On Thursday afternoon, students presented the solutions they’d been working toward all week. Pinson was serving as mentor to a team that proposed a method for expanding access to existing programs for those experiencing food insecurity.

“I’m very proud of my team,” says Pinson, noting that instead of “trying to invent the next widget or gadget” they had focused on “how to make existing relationships and existing infrastructure that much more effective.”

Such pride in their mentees is a common theme among alumni mentors, and may explain why so many volunteer their time and resources year after year.

“There is nothing more fulfilling than being able to give back to these students,” says Rahaman, “to see the spark as they resonate with the experiences that the mentors can share with them.”

Learn how you can support UPOP students and many more members of the MIT community on March 12, 2020, during the MIT 24-Hour Challenge. Interested alumni are also encouraged to apply as mentors for future UPOP cohorts; contact UPOP for more information.

How Science Can Benefit from a Good Plot Twist

How to Communicate by the Numbers