Why Don’t Woodpeckers Get Concussions? 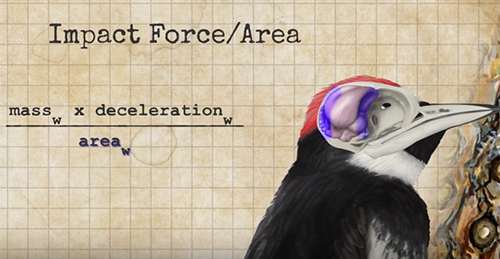 For birds that bang their head against trees all day, with great impact and frequency, one might reasonably conclude that woodpeckers are prone to brain damage—but they aren’t. In fact, their brains are very well suited to withstand the impact. MIT Professor Lorna Gibson, a MacVicar Fellow and the Matoula S. Salapatas Professor of Materials Science and Engineering, wanted to figure out why.

Gibson first started investigating the matter when she heard the theory that they have a foam-like material between their brain and their skull. Gibson is a lover of birds and studies the mechanical behavior of foam.

Spoiler alert: Gibson quickly determined that there is no foam or spongy material that protects the brain of the woodpecker and in the end it comes down to the size of their brains and the physiology of their skulls. Gibson recently partnered with MITx, the Institute's collection of free, online courses, to produce an eight-part video series explaining why woodpeckers are built to peck, featuring live footage of woodpeckers as Gibson walks the audience through the science.

After giving a brief introduction about the woodpecker—and some backstory on why they peck, including foraging for insects, building a nest, and as a mating call—Gibson explains the forces behind the pecking. Using high-speed video footage gathered by neurologists, she was able to get information on the speed of the pecking—15 mph—and the deceleration when the beak hits the tree. She used this data to estimate the forces acting on the woodpecker brain and by comparing it to what we know about human brain injury, figured out the limit of the woodpecker’s tolerance.

“It turns out it’s all a matter of scale,” says Gibson, “and the smaller the brain, the larger the deceleration it can withstand.” Orientation of the brain also matters, because this effects the contact area in regards to the scaling law. And the brain of the woodpecker, it turns out, is about eight times smaller than the human brain.

In addition to the facts discussed in the series, Gibson notes that other factors that contribute to protecting the brain of the woodpecker. As opposed to the human brain, which has space and fluid between the brain and the skull, the woodpecker’s brain has very little cerebrospinal fluid and is tightly packed in the skull, which Gibson says “reduces the motion of the brain within the skull on impact and reduces the effect of shock waves transmitted through the fluid.”

School Founder Puts Atlanta Students in Charge of Their Own Education