Wheels of Change Made of Bamboo

Finding Joy in Making, and the Making of #HellaJuneteenth

When David Wang made his first bicycle out of bamboo, he felt inspired. After getting over his initial surprise that it actually worked, he began dreaming of ways he could spread this newfound discovery in Beijing, where he had been living for three years doing market research for a local consulting agency, China Youthology. 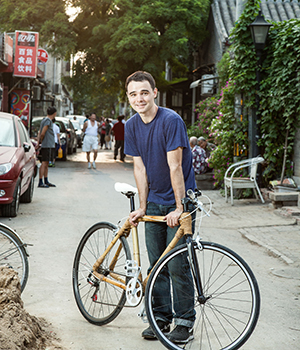 In the ‘70s and ‘80s, Beijing was the bicycling capital of the world. In 1980, bicycles made up about 62 percent of all non-walking trips in Beijing, a number that fell to about 16 percent in 2010. Rapid motorization caused bikes to be left behind to rust—as well as a host of urban problems, including decreased air quality and environmental challenges.

In his free time, Wang started to refurbish abandoned bikes. “A lot of frames couldn’t be saved, they were too rusted,” says Wang, who found bamboo to be the perfect material to help reassemble the old machines. “The bike was light, it absorbed shock, and it was beautiful. Everyone asked me about it.”
As he continued to refine his craft, Wang encountered others interested in learning to make their own bamboo bicycles, eventually forming a team and creating a company—Bamboo Bicycle Beijing. “We made designs for bamboo bicycles, prototyped them, custom-made and designed our own equipment and tools, and found sources for all the materials we would need.”

Wang quickly realized that his vision wasn’t just about creating a bamboo bike, but instilling the value of teaching someone to make their own—especially out of a carbon-negative material. After a successful kickstarter campaign helped fund the first workshop to help 25 youths learn to build their own bicycles, the social enterprise steadily began to grow.

While growing his company, Wang enrolled at MIT in the Department of Urban Studies and Planning and Sloan’s MBA program, which hugely impacted his ability to scale the mission, says Wang. “What started as a fun social project,” says Wang, “has since organically developed into a community-driven social enterprise that strives to empower the local community. Our project aims to combat motorization in China by empowering youth to design and build their own community mobility solutions using bamboo.”

Not only does Bamboo Bicycle Beijing teach people to build their own bikes, they run workshops and host local high school and college summer fellows—training them to teach youths to build their own bamboo bicycles and take the skills they learn to improve their community. Bamboo Bicycles Beijing also partners with local schools, NGOs, and businesses, offering their training program to corporations and nonprofits around the world. Students and community leaders have held workshops in places like Hong Kong, Shanghai, Sanya, Guangzhou, Taiwan, Laos, Ethiopia, and Boston.

Today, Wang estimates that they have built more than 500 bikes from their shop in Beijing and taught more than 3,000 people to make bikes. “Especially for Chinese students, they live in such a test-based society, so learning to build a bike is such a different kind of education. To be able to learn maker skills and bring their ideas into reality is so important.”

Wang and his team at Bamboo Bicycles Beijing have seen the impact of the program firsthand on many of the local youths that have completed the program. Wang says that one of their summer fellows even wrote his personal statement for college on his experience in the program; was accepted to a school in the US, and received a substantial scholarship to attend.

Finding Joy in Making, and the Making of #HellaJuneteenth

Designing the Essential and the Unseen

A Dance Floor Designer with a Sense of Drama

Ever Wondered What a Fossil-Fuel-Free House Could Look Like?