What If Recovery from Natural Disasters Could Be Powered by Debris? 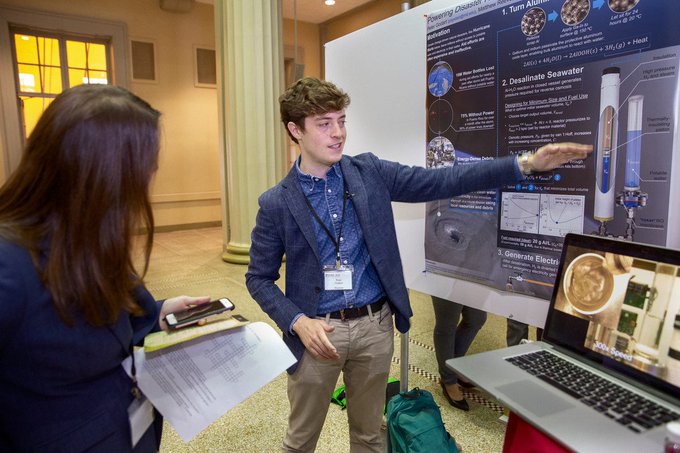 Peter Godart '15, SM '19 is holding a dozen aluminum pellets in the palm of his hand as he talks about his research. He has been working on harnessing enough energy from these small pellets to power desalination and generate electricity for those who need it most—survivors of natural disasters.

“There’s a lot of energy in aluminum debris from natural disasters,” Godart explains. “If you pelletize aluminum and treat it with a small amount of gallium and indium, it becomes reactive with water.” The resulting reaction generates enough steam and hydrogen to provide the high pressure required for reverse osmosis, a common method of desalination. Godart has named this system Heat-Driven Reverse Osmosis (HDRO).

“Peter’s work is significant in that it provides an economical way to recycle materials while providing clean energy and fresh water,” adds Douglas Hart, professor of mechanical engineering and Godart’s advisor. “It is inexpensive, robust, efficient, and clean—producing no toxic emissions or waste.”

The device Godart has constructed to facilitate this system comprises two tube-like vessels connected by pipes. The aluminum fuel reacts with water inside one vessel. The resulting steam and hydrogen creates enough pressure to force seawater through a semipermeable membrane via reverse osmosis. After clean water is generated through this process, the remaining hydrogen can be stored and later used in a fuel cell to provide back-up electricity.

“The beautiful thing about this system is it’s super compact, making it ideal for small scale disaster efforts,” Godart explains. “It could also conceivably be something campers, hikers, or sailors have on hand in the event of an emergency.”

“I want to take the world’s aluminum trash that’s sitting in landfills and extract the energy from it.”

Aluminum fuel has been a driving force in Godart’s academic career. As a mechanical engineering undergraduate at MIT, he took the class 2.013, Engineering Systems Design. During the class, he worked with aluminum fuel. “That experience really inspired me to start thinking about alternative sources of energy,” he recalls.

After earning his bachelor’s degree, Godart fulfilled a childhood dream and took a position at NASA’s Jet Propulsion Lab (JPL) working on the team responsible for operating the Mars Curiosity Rover. While at JPL, he also managed a project that looked into using aluminum fuel to power a lander that could someday be sent to Europa.

One day, Godart had an epiphany about his career path. Rather than focus on energy applications for space exploration, he realized he wanted to devote his attention to researching solutions for problems caused by anthropogenic climate change here on Earth. He called Hart, who was Godart’s instructor in class 2.013, went back to the East Coast, and enrolled in graduate school.

“I came back to MIT and immediately started working on energy applications related to climate change mitigation and adaptation,” recalls Godart. The spate of destructive hurricanes in 2017, including Hurricane Maria, shaped his work on HDRO.

“I came back to MIT and immediately started working on energy applications related to climate change mitigation and adaptation."

Godart recently traveled to Puerto Rico while pursuing his other passion—jazz music. Since the age of six, he has played the piano and written music. As an Emerson Fellow at MIT since his freshman year, he has composed and performed music with the MIT Festival Jazz Ensemble, the MIT Wind Ensemble, and numerous small groups on campus and around Boston. This past year, Godart traveled with the MIT Festival Jazz Ensemble to perform in Puerto Rico with saxophonist Miguel Zenon and went with the MIT Wind Ensemble to the Dominican Republic.

“I got to see firsthand the aftermath of Hurricane Maria,” he says. Seeing the resulting trash that had accumulated in parts of Puerto Rico reinvigorated his current research focus. “I want to take the world’s aluminum trash that’s sitting in landfills and extract the energy from it.”

In addition to looking into how to turn things like soda cans into usable fuel, Godart has shifted to studying the technoeconomics of how aluminum energy conversion can be implemented in different regions of the world. While he examines ways to make aluminum waste more valuable locally, Godart will continue to experimentally work on his HDRO system. He was recently named a Martin Family Society Fellow for Sustainability, a Hugh Hampton Young Fellow, and a J-WAFS Fellow for Water Solutions.

This story originally appeared in the Winter 2020 issue of MechE Connects.

Watch (below): Godart in pursuit of his two passions, engineering research and music.