What Does It Take to Fool Penn and Teller? 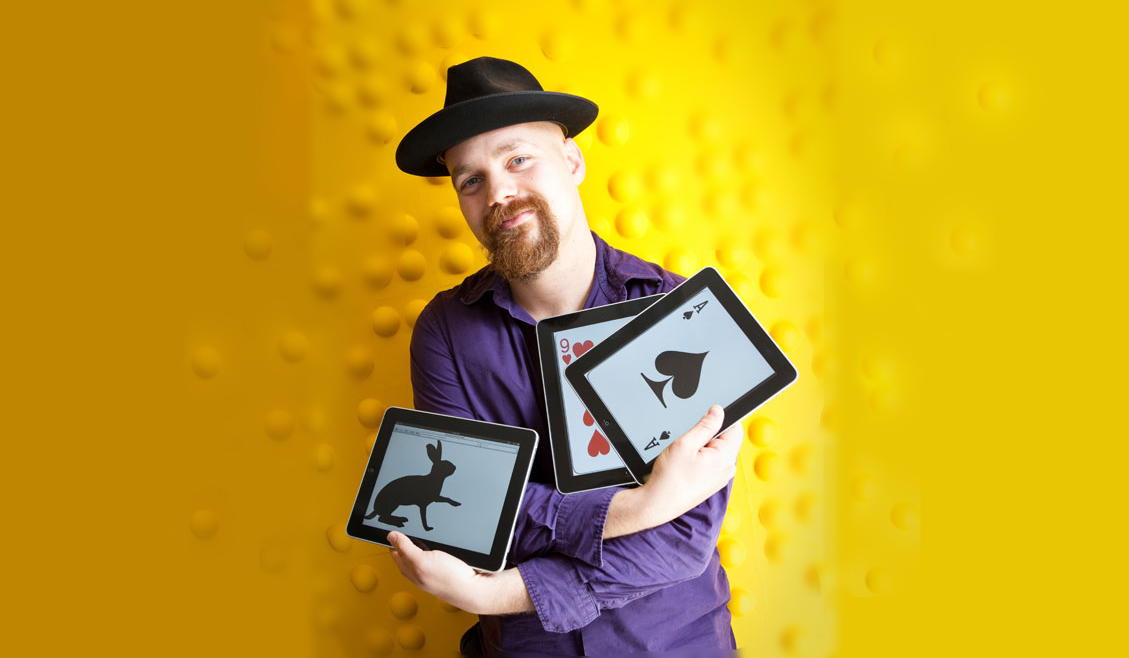 Seth Raphael SM ’07 has made a career out of intertwining magic and technology. He has been a global TED fellow, was the chief magical officer (yes, really) at Bump Technologies, and is now a software architect at Google, where he recently moved from the augmented reality team to a team that he can only reveal is “prototyping the future of work.” In April, he appeared on Penn & Teller: Fool Us, performing a classic mind-reading trick with concealed high-tech underpinnings. (Spoiler: He fooled them.)

As a child, Raphael fell in love with magic after he inherited magic books from his grandfather and tricks that he’d created. A little later, he got into computers, and by the time he was in high school he was combining both interests. “I was programming my computer to basically do what was in the magic books, taking these tricks that I had been performing and putting the computer in the role of the magician,” he says.

Raphael, who lives in Portland, Oregon, with his partner and their five young children, earned a bachelor’s degree at Hampshire College in the future of magic, a major he designed that involved technology and magic, before joining the affective computing group of MIT’s Media Lab to work with Rosalind Picard, professor of media arts and sciences. “The joy of the Media Lab is they encourage exploration of your passions and intersection with the interests of your research group and the sponsors,” he says. “Any crazy idea I got, I could just go out and create.”

Outside the classroom at MIT, he performed open-source magic shows, inviting audience members to stick around afterward if they wanted to know how he did his tricks—and many did. Unlike most magicians, he would explain his process and then ask for their feedback. The shows led him to his thesis work, part of which revealed that learning the secrets behind magic tricks increased viewers’ enjoyment and made them interested in seeing more magic. “For me, the secrets have never been so tightly guarded,” he says. “I want there to be a questioning and an openness.”

Lately, Raphael has been offering some of his secrets online “to help spread joy in the pandemic,” though he was working on techniques and strategies for performing magic over the internet as far back as the early 2000s. “I feel like finally the world is ready,” he says. He has connected with a large online community that’s interested in his Zoom-era magic tricks, and in sharing, and he has released a couple of tricks on his website that have been very popular. “Whereas a lot of magicians are just bringing their card tricks and holding up a deck of cards, my magic is sort of transformative in the way of thinking about the medium as the message: How do you use Zoom and the internet for magic?” he says.

Raphael welcomes the various challenges of tech-based magic and says that two “hooks” have set it apart for him: “You have to understand your audience’s understanding of technology and what they think computers or technology can’t do. If computers can do anything, then nothing is magical. So, you really have to find that edge of where people believe the limit of technology is, and then you go two steps beyond that,” he says. “And then the other end is really looking at technology and saying, Hey look, it is magic, we have magic powers, what do people wish they could do?…Let’s think about what people really wish they could accomplish or have in their life, and let’s design technology toward that.”

What would his grandfather think of the magic he’s making now? “I’m pretty certain he would love it. He was a scientist, and I think he would be amazed by all the technology but just be tickled that the tradition continues of pushing the bounds of what’s possible.”

His collegial audience philosophy is itself an important breakthrough in the magic art.