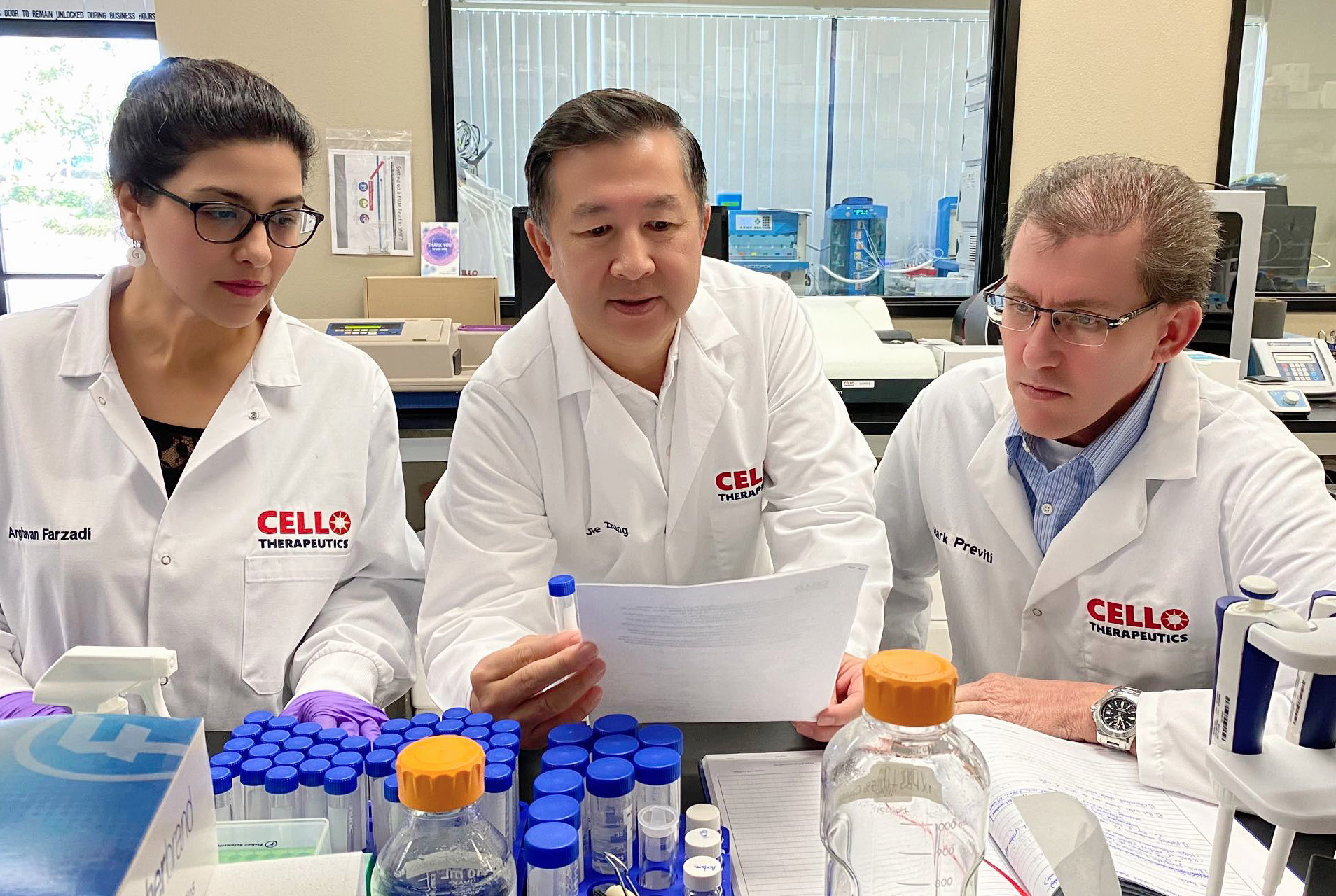 Forecasting earthquakes is a complex problem in science, relying on specialized analysis of minute signals from the Earth’s crust. Cancer treatment, it goes without saying, is also a highly complex field, consuming the focus of thousands of researchers and billions of dollars worldwide. Either one of those projects would be enough to fill the waking hours of any scientist. Both subjects, however, come together in the research agenda of Jie Zhang PhD ’97, a geophysicist and biotech entrepreneur whose work spans from the largest tremors in the Earth’s crust to the smallest tumor cells inside the human body.

For the last six years, Zhang has been CEO of Cello Therapeutics, which uses nanoparticles to treat cancer, and he recently launched EARTHX, a fully automated system for monitoring and forecasting earthquakes in China. He published results of both projects in Nature Communications last year.

“The two subjects seem unrelated but share one thing in common: an impossible mission,” Zhang says. “That is why I have been building talented teams and working with many distinguished scientists to approach the problems.”

Zhang’s accomplishments—which earned him a No. 1 ranking among the Most Creative 100 People in China by Fast Company magazine in 2015 and election to the US National Academy of Engineering in 2020—are even more impressive since he never intended to become a scientist. Growing up in China, Zhang’s dream was to become an artist. In college, however, he began focusing on geophysics as a more practical option for earning admission to a graduate school in the United States, leading to his acceptance to MIT. “I tell my students that once you truly work on something and make real progress, and then the work becomes more meaningful,” he says. “Then you may begin to love it.”

He developed his wide-ranging interests in the lab run by professor emeritus M. Nafi Toksöz in the Department of Earth, Atmospheric, and Planetary Sciences (EAPS). Unlike most scientific labs, in which students are paired with an advisor and funded for specific projects, Toksöz encouraged students to work with any faculty member, giving Zhang exposure to fields including earthquake and exploration seismology, electrical methods, and environmental engineering. “I’ve never seen another lab like it in the world,” Zhang says. “MIT faculty are all so unique, but also very humble—they were always referring me to somebody else and saying, you need to pay attention to their work.”

If you keep curiosity and respect other people’s work, you will eventually see there are many other opportunities where you can make a breakthrough.

The experience, he says, helped him to avoid tunnel vision as he conducted seismic refraction surveys at sites from New England to Antarctica, eventually developing a near-surface imaging technology that is now used globally in the seismic industry. After graduation, in 1998, Zhang founded GeoTomo, a company that uses imaging technologies to search for energy resources underground. He soon realized, however, that similar technology could be used on a much smaller scale to examine the human body—for example, electrical signals could measure the resistivity of bone instead of rock. In 1999, he founded a new company, Miles Medical, setting the stage for his dual career spanning geophysics and medicine.

In 2011, he returned to China to found the Geophysical Research Institute at the University of Science and Technology in Hefei, where he is national chair professor of geophysics. His connections there led to EARTHX, which uses a network of some 300 sensors in Sichuan Province with sensitivity to identify tremors as subtle as those made by a coffee cup falling from a table.

“People focus on large tremors, but you really need to focus on the small earthquakes that can give you indications of movements and stress accumulation in the Earth’s crust over time,” he says. “That will give you evidence that the big one is coming.” The project is currently using artificial intelligence to sort through massive amounts of data to produce meaningful predictions. In the near term, EARTHX could provide precious days’ warning for people to evacuate before an earthquake occurs; eventually it could also help to direct decisions on city building and construction.

Meanwhile, his continued involvement in the biomedical field led to him investing in Cello Therapeutics Inc. and Cellics Therapeutics Inc., a biotech startup using nanoparticles to treat and prevent infectious and inflammatory diseases, in 2017. Inspired by a desire to play a larger role in developing the nanotechnology, he became CEO of both companies.

Zhang now spends the bulk of his time in San Diego, directing Cello’s cancer research. The company has developed cell membrane–coated nanoparticles for delivering cancer treatment drugs. The nanoparticle consists of a synthetic nanoparticulate core camouflaged by a layer of naturally derived cell membranes from a human, therefore, it can adapt to complex biological environments in the human body. In animal studies, the company’s leading product “effectively eliminated or inhibited tumor growth,” states a Cello press release, adding that the treatment for colorectal cancer “not only entirely eradicated the tumor, but also induced a sustained long-term immunity.” In addition to its incredible success rate, the technology could decrease the amount of a drug needed to target a tumor by seven to ten times, reducing side effects significantly. The company aims to start human clinical trials next year.

When he isn’t pulling a double workday to take advantage of daylight hours in the United States and China, or teaching golf or math to his children, Zhang trains for marathons, which he started running at age 50 to keep his mind strong. He also serves on the board of the Asia School of Business in Malaysia, which is associated with MIT Sloan, and he recently served on the MIT EAPS Visiting Committee. He attributes his ability to cross disciplines to the humility he learned at MIT, which made him unafraid to ask questions outside his comfort area, even as he added biotechnology to his already formidable geophysics resume. “If you keep curiosity and respect other people’s work,” he says, “you will eventually see there are many other opportunities where you can make a breakthrough.”