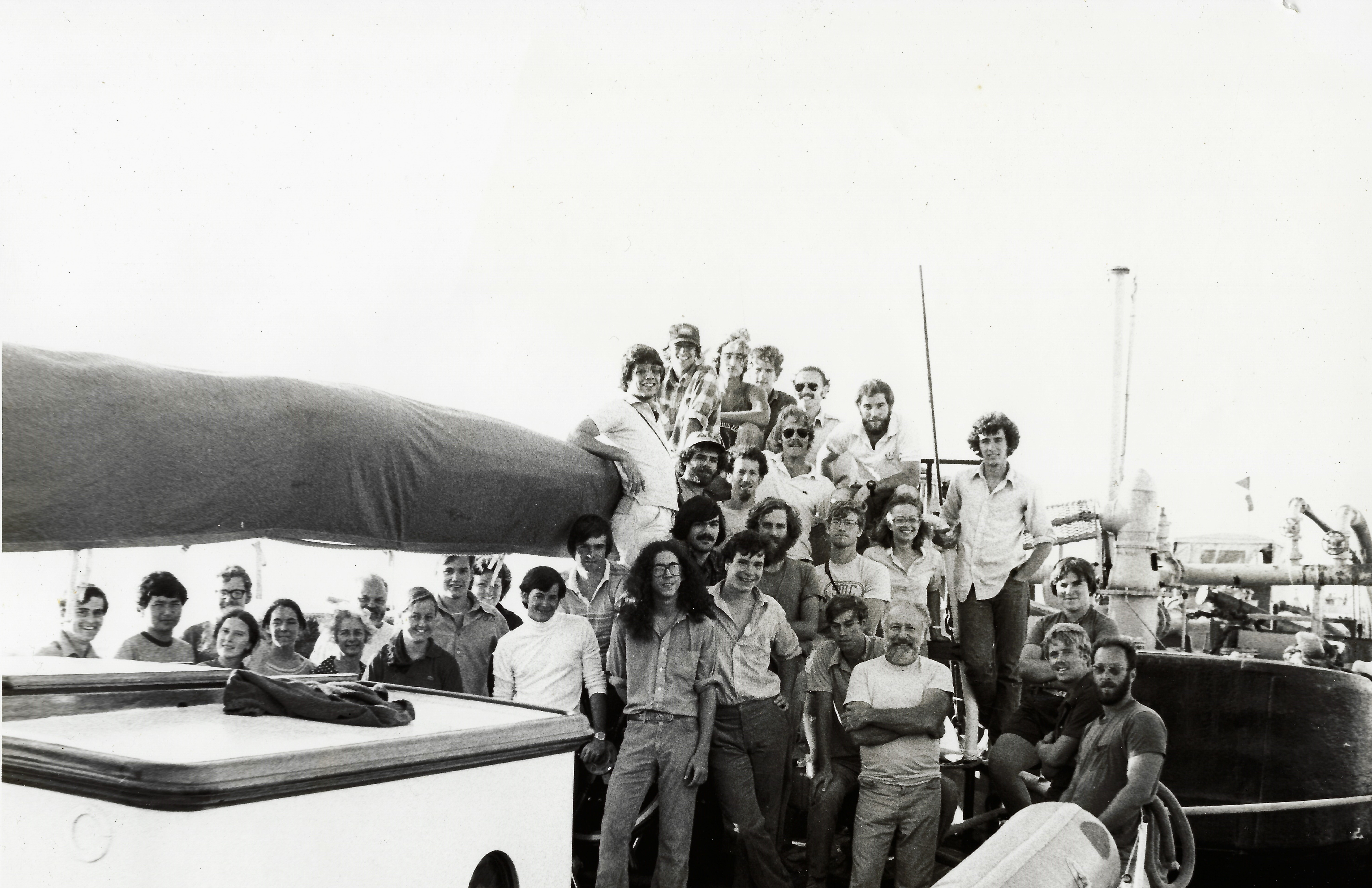 Frank Geisel ’80: “This was taken in January 1980 in Miami Harbor aboard the R/V Westward. The cruise was scheduled during MIT’s Independent Activities Period (IAP). We flew out of Boston to Key West, spent one night there, and boarded the next morning. There was a very brief introduction, and then we cast off. (I am standing in the upper half of the photo with aviator sunglasses, a white polo shirt, and a mustache.)

“As the IAP break approached, with graduation in June looming ahead, the heady atmosphere of on-campus recruitment activities was like palpable energy. Many in the ocean/marine field had already secured positions with Exxon, Mobil, or any number of other industry giants. I was deep in pursuit of working on the Ocean Thermal Energy Conversion project in Puerto Rico. We were standing in the major paradigm shift from analog to digital, and the opportunity to sail aboard R/V Westward presented as analog an opportunity as existed.

“The voyage was organized by [the late] Professor Doug Carmichael for all Course 13 [Ocean Engineering] undergraduates—of course, Course 13 doesn’t exist anymore, having been taken into Course 2.

“I was looking for a hands-on experience, and sailing Westward (a 135-foot topsail schooner) was about as hands-on as it got. I had sailing experience, but many did not, and from the moment we stepped onboard, it was all-hands to mooring lines, halyards, sheets, and more. More included meals, galley duty, navigation, standing watches, and conducting all manner of oceanographic experimentation.

“We left Key West and sailed down to the Dry Tortugas, and from there around and into the Gulf of Florida, where we spent the next week or so getting slammed around in heavy seas and wind. It was one of the best learning experiences I had from MIT, and unknown to me, it would be the start of a career that took me around the world, in extreme environments—continuously learning along the way.

“Professor Carmichael held a small lecture as we were heading back to Miami to remind all of us: ‘One day, when you are captains of industry and wondering why you aren’t getting accurate or timely information from the field, you’ll remember this trip and think of all the people actually out at sea, getting knocked around, cold, wet, and tired, and you’ll have a much different perspective.’

“I carried that perspective into my first job upon graduation, which took me to offshore Alaska for 12 major icebreaking missions aboard the US Coast Guard cutters Polar Sea and Polar Star and two missions to Antarctica. Following that, I worked in underwater robotics, acoustics, closed-loop control, deep-water integrated navigation, and, most recently, aerospace and geospatial intelligence.

“It was really that firsthand science and engineering experience that set me in motion for my next great set of adventures.”

Frank Geisel lives in Duxbury, MA, and works in consulting on systems engineering.

Tech Reflection is a Slice of MIT series that tells the first-person stories behind MIT photos. Read more reminiscences of campus life.