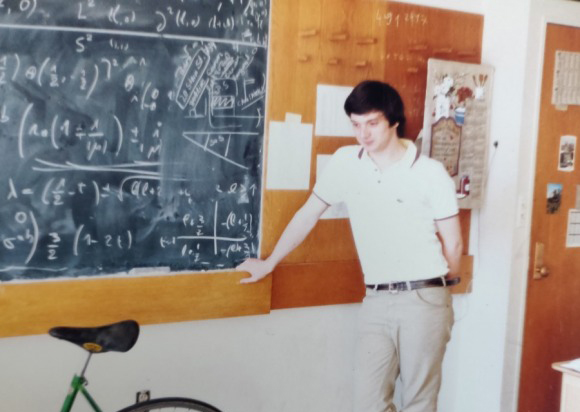 Stefano Forte PhD ’87: “I know that this photo was taken in either late spring or early summer of 1986 in the old Center for Theoretical Physics in Building 6, at the end of the Infinite Corridor, now replaced by the wonderful new Green Center for Physics. I can say that with absolute certainty because I recognize the equation on the blackboard.

“It reads lambda=....), and it is Eq.(40) of my paper that appeared as an MIT CTP preprint in August 1986 and was published a few months later. It was a substantial part of the research in my PhD thesis, and that particular equation was a breakthrough. I remember I had been agonizing over it for months, and then one night as I was looking at the Charles from my room on floor 17 of Tang Hall, I had a kind of breakthrough, and all of a sudden it all worked.”

“The next morning, I showed the result to my officemate, Michael Bos PhD ’88, with whom I shared the same advisor, Roman Jackiw [renowned professor of physics]. In those days, we spent endless hours discussing our respective research projects. We went to dinner together to some cheap joint almost every night, and then back to the office, where we’d typically work until midnight or later. I was proud and happy to show him that I had finally managed to solve the problem that had kept me awake and that we had discussed over many dinners.”

“In the particular piece of work from the blackboard, I had managed to construct an explicit example of a quantum field theory phenomenon, which was otherwise only known formally (i.e., one could show that it must happen, while I actually constructed a situation in which it happened). What was special about it was that solving it was a classic “aha moment.” Frankly, it is one of the things that makes doing science such an interesting experience. It does not happen very often (at least to me!). I am still a research physicist 35 years later.”

Stefano Forte PhD ’87 is a professor at the University of Milan in Italy.

Tech Reflection is a Slice of MIT series that tells the first-person stories behind MIT photos. Read more reminiscences of campus life.