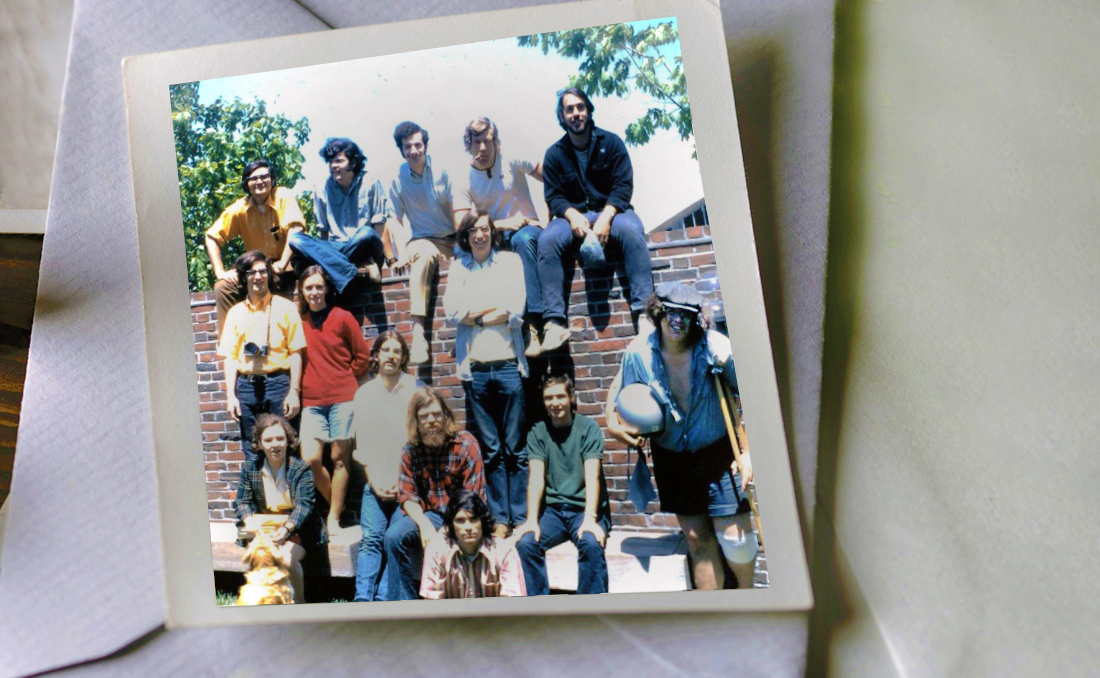 Ken Rosato ’73: “This photo was taken by Scott Davidson ’73, my freshman year roommate in Baker House. He took lots of pictures, actually slides, and five years ago he had them digitized and sent them to us. Our junior year, he took pictures of us sitting on the wall in the garden across Amherst Alley from Baker House. He repeated the tradition during our senior year, which is when this photo is from. All but one of the men in the picture were in my class or later and lived, at least originally, in Baker House. I am standing near the front on the left, wearing a light-colored shirt and blue jeans.

“Some of the people in the photo were involved in the original Baker House piano drop in 1972, and some put up the spotlight on the top of the Green Building tower that shone toward Baker House for a year or two. It all started with a pretty beat-up piano, and somewhere along the way, it was decided to throw it off the roof. I was not a major contributor to the planning, but I was involved. Unfortunately, it occurred on a Sunday afternoon when I was returning from out of town and I missed it. I was on the roof for the second piano drop, though, in 1973.”

“I think this group was special because we came from all over (I was from small town Pennsylvania, Scott was from Queens, etc.), from different family backgrounds, and took on the rigorous challenge of MIT with a shared sense of humor and a fierce loyalty to each other. As long as we lived in Baker House, we arranged to have our rooms together. For most of us, MIT was a trial by fire, and we came through it together.”

“Baker House was built to be almost indestructible, and we took advantage of that by being as physical as possible, blowing off steam with water fights and all sorts of activities better left undescribed. I may not remember all the details, but I do remember how great it was to have a place like that to call home for the four most impressionable years of my life.”

Ken Rosato ’73 lives in Texas and is a retired land surveyor.

Tech Reflection is a new Slice of MIT series that tells the first-person stories behind MIT photos. Read more reminiscences of campus life.

Standing with a crutch: Nick Vasilatos ’75