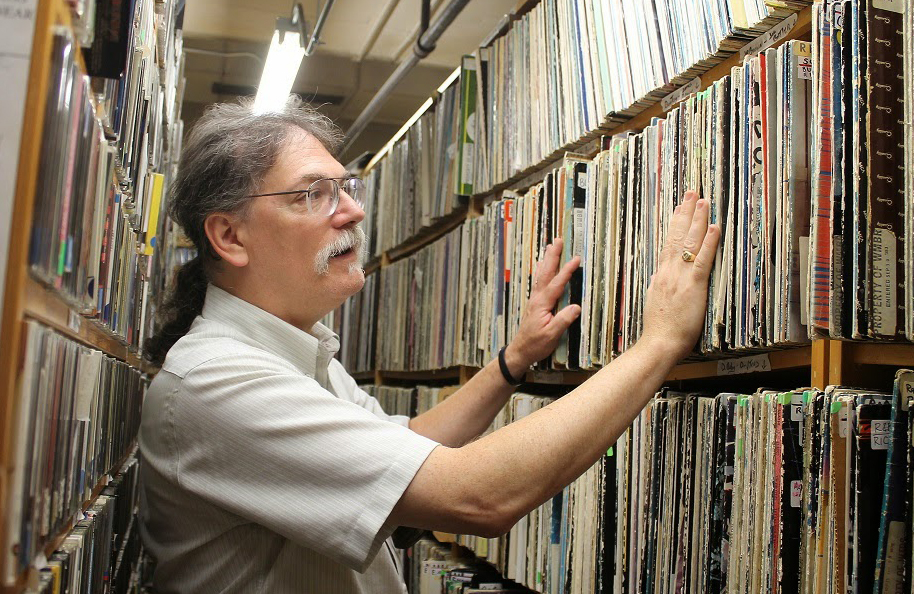 The corridors of WMBR are quiet—empty of the DJs who should be combing the shelves in search of the perfect song, the engineers ensuring that the equipment is broadcasting to the whole Boston area. MIT’s campus radio station closed its doors in the basement of Walker Memorial in March 2020, when the Institute sent staff and students home at the start of the covid-19 pandemic. Though the campus reopened in a limited way for 2020–’21, the broadcast studio has remained shut to the majority of DJs for more than a year.

But the 178 students and others involved in running WMBR were not about to let this decades-old institution dwindle. You can still tune in to 88.1 FM 24 hours a day and rock out to the pop-punk and rock show Breakfast of Champions or warble along with the Americana, country, and bluegrass of FM Road—all prerecorded and edited from the safety of DJs’ homes and submitted to Brian Sennett ’13, MEng ’15, host of the classical show Music by Dead People and WMBR’s technical director.

When the campus shut down, Sennett recalls, “someone wise said, ‘Take all the equipment you need to keep things operating. This is going to be a while.’”

Sennett joined WMBR as a sophomore in 2010 and is one of 40 alumni still active at the station, which for many has come to feel like a family. That feeling has a lot to do with this continued alumni engagement—and with why its members banded together to make sure the station and its culture wouldn’t be a casualty of the pandemic.

WMBR is an all-volunteer, primarily student-­run group supporting an eclectic range of shows. Community members with no MIT affiliation work alongside students, alumni, and professors, all led by an MIT student general manager, currently Julia Arnold.

MIT has had a campus radio station since the late 1940s, but it did not begin using its current call letters—which stand for “Walker Memorial Basement Radio”—until 1979. That was when Jon Pollack, SM ’79, host of The Jazz Train, graduated. Briefly involved with the station as a graduate student, Pollack returned in 1987 and has been there ever since.

A list of WMBR team members reveals graduation dates ranging from 1979 to 2020. Having that deep well of knowledge has helped the station stay on track as technology and tastes have changed.

As technical director, Sennett helped transition the station from in-studio to at-home operations in 2020. Now, after seven years in his leadership role, he’s started to train Gillian Roeder ’24 to take it over by the end of the fall 2021 semester.

“I’m glad that there’s this sort of torch-passing happening between generations,” says Jacob Miske ’20, host of Uncommon Grounds,where he plays a mix of older and newer underground and counterculture music. “It’s something that I worried about with covid—that a lot of student cultural groups’ traditions are being obfuscated by this dead period.”

“We write down who plays what on each disc. I could go to the record library and grab a record from 1988 and see that John played this, Sue played this.”

Evidence of WMBR’s traditions is etched on the covers of the records and CDs in the station’s extensive music library. Classical, jazz, heavy metal, blues, rock—every genre imaginable is housed in floor-to-ceiling bookshelves.

“We write down who plays what on each disc,” says Marianna Parker ’00, one of three rotating hosts of alt-rock show King Ghidorah. “I could go to the record library and grab a record from 1988 and see that John played this, Sue played this.”

While their predecessors provide musical guidance, students get even broader benefits from working elbow to elbow with alumni and community members. Miske, for example, was inspired by Dave Goodman, host of WMBR’s political show Sound and Fury. A longtime radio professional, Goodman did not attend MIT but has worked with WMBR for 30 years.

“Through his show and talking to him, he motivated me to go out and become politically engaged during the 2016 and 2020 primaries,” says Miske.

As for Parker, who has volunteered for WMBR since 2012 after a brief post-­graduation hiatus and is now a doctor, she hopes her professional journey offers its own encouragement to students she meets through the station.

“I wasn’t pre-med. I went and did some other things, then went back to medical school,” says Parker. “I hope they see in me a person who took a slightly different path and they can see a path for their future.”

The FCC is the Limit

Parker is also involved with WMBR as president of the Technology Broadcasting Corporation (TBC), the entity that holds the station’s FCC license and looks out for its long-term financial and legal health. This corporation, consisting of students, professors, and alumni, is one of the things that set WMBR apart from other college radio stations. While day-to-day operations are 100 percent supported by listener donations, bigger projects—such as moving the FM transmitter to a taller building in Kendall Square—have the backing of the TBC and MIT.

As unusual as WMBR is in its support system, it’s even more unusual in its programming.

“Except for being FCC compliant, we really don’t have any rules about what DJs can do,” says Parker.

Sennett learned that on day one, when he was recruited to the station by a fellow violinist in the MIT Symphony Orchestra.

“She said, ‘I don’t know if you’re interested in radio at all, but I have a show on WMBR and I play classical music and death metal,’” Sennett remembers. “And I said, ‘In the same show?’ And she said, ‘Yeah. That’s just the thing we do at WMBR.’”

“A lot of other radio stations have some kind of programming board that decides what gets aired,” says Valentina Chamorro ’16, host of the poetry show Lentil and Stone. “WMBR just doesn’t have that. It’s a huge platform that we all have access to do whatever we want with, and that’s such an incredible privilege.”

Missing out on camaraderie and the live radio experience has been hard for many members during the covid-19 era. But they have adapted, learning new skills like using the audio-editing software GarageBand. While some hosts admit the result feels more like podcasting than radio, it has been keeping the station alive. And the leadership hopes to keep open the option for remote production so alumni can submit shows from anywhere.

But for many DJs, the chance to get back to the station—to wander the stacks and say hello to colleagues—can’t come soon enough.

“When I arrive and the DJ before me is on the air, I feel like it’s the bridge of a ship,” says Sennett. “The music’s playing, and it’s about to be your turn. You flip the switch to go on the air, and you hit play, and the ship is your hands. Then you say hi to the next person who walks in—someone you haven’ t seen for a week. They go on and you think, ‘Now the ship is in someone else’s hands. I’ve done my part.’”

I was associated with this outfit back when it was WMIT (early 1950s), having been persuaded by my roommate, the station manager. The only remarkable event was the loss of most of the record collection from an unsecured space. After that, I had to bring my own LPs,