A New Look for the MITAA 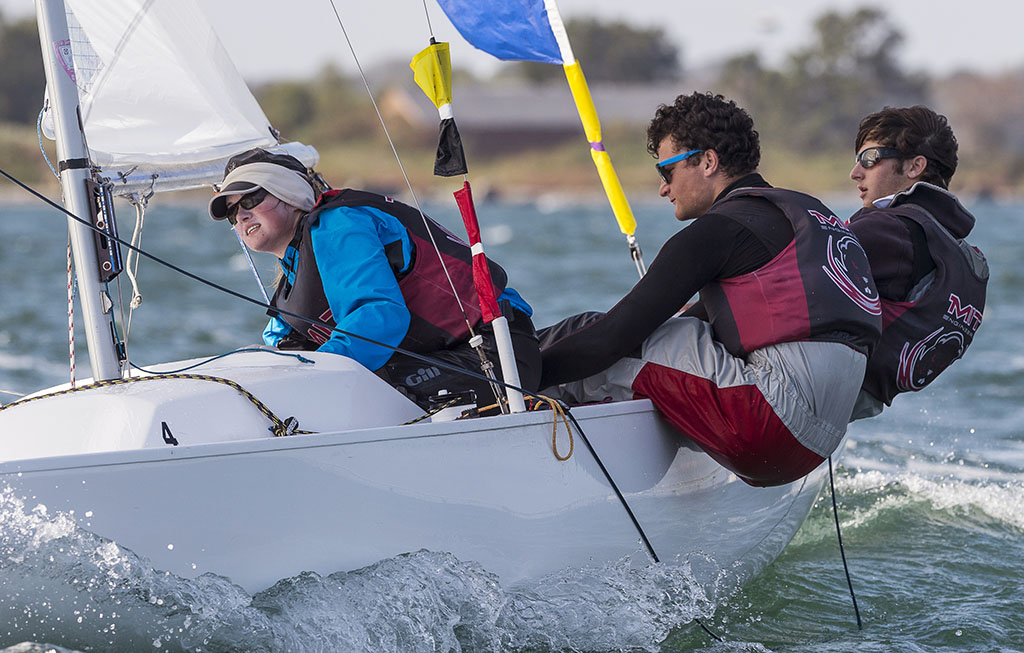 David Larson ’16, SM ’18 spends much of his time thinking about boats. He has been a competitive sailor since high school. In his free time, he designs and tinkers with boats and is a member of the MIT Nautical Association Executive Committee. As a PhD student in MIT’s Laboratory for Ship and Platform Flows, he works on modeling ship-wave interactions to understand how ships behave in severe storms.

“I think I got into design and engineering through the sailing route,” says Larson. “I wanted to understand the physics of what was happening when I was out on the water.”

It was sailing that first drew Larson, who grew up near the water in San Diego, to MIT. On a trip as a freshman in high school, he stayed at a hotel on Memorial Drive and watched sailboats dart along the Charles River. Four years later, he enrolled at MIT.

"I wanted to understand the physics of what was happening when I was out on the water," says Larson.

On the second day of teaching 2.016, Sclavounos told students about his experiences designing boats for the America’s Cup. Larson knew some of the sailors with whom Sclavounos had worked. The two struck up a conversation after class, marking the beginning of their collaboration.

“Professor Sclavounos was the most influential in encouraging me to continue studying ocean engineering and naval architecture,” recalls Larson. Sclavounos recognized Larson’s talent and passion, often taking time after class to explain theories that Larson hadn’t yet learned.

“He was by far the best student in the class and was eagerly sought after by other students to help them through the course,” adds Sclavounos. “It was immediately evident to me that he possessed an intelligence and maturity unusual for his age.”

After graduating with his bachelor’s degree in 2016, Larson enrolled in MIT’s graduate program for mechanical engineering and ocean engineering. The summer between his undergraduate and graduate studies, he went back to his native California for an internship with Morrelli and Melvin Design and Engineering.

During his internship, Larson applied the concepts he learned as an undergrad—like controls, geometry optimization, and fluid mechanics—to real-world ship design. “That experience gave me a lot of practical insight into what the actual ship design process entails,” says Larson.

Back at MIT, Larson has spent his graduate studies working with Sclavounos on developing stochastic models for how ships interact with waves. While his work seems at times theoretical and abstract, it is grounded in a very practical problem: keeping ships safe in extreme weather.

“What I’m doing is motivated by practical ship design and manufacturing,” explains Larson. “I’m working to create a framework that gets more accurate predictions for how ships behave in severe storms and to get those predictions fast enough to use in iterative design.”

“What I’m doing is motivated by practical ship design and manufacturing. I’m working to create a framework that gets more accurate predictions for how ships behave in severe storms."

Current models have come a long way in enhancing our ability to predict how waves move in the ocean. But many existing models that predict how ships move in waves, while extremely powerful, are constrained to one or two degrees of freedom or often use oversimplified hull geometries. Larson hopes to take those models to the next level.

“The key components of our method are that we can take any realistic ship geometry directly from a CAD program, put that geometry through our model that treats the full six degrees of freedom, and get predictions for how these ships will behave in waves,” explains Larson.

Understanding how these ships behave in rough water could have immediate industrial applications. In addition to helping sailors find the safest route for their vessels, the predictions could be used to someday facilitate interactive ship design.

“My long-term goal is to eventually create an interface that can be used by design and manufacturing engineers for iterative design and optimization of the next generation of ships,” says Larson.

When Larson needs a break from mathematical equations and modeling, he uses CAD to design boats. “My research is quite mathematical, so designing boats is my outlet for reconnecting with the experimental and practical work I loved doing as an undergrad,” he adds.

Whether it’s designing boats in his spare time, competitive sailing, umpiring collegiate races across New England, helping the MIT Sailing Pavilion design its next fleet of dinghies, or developing a model to predict how ships behave in choppy seas—Larson will continue to pursue the passion for sailing he developed in childhood.

This story originally appeared in the summer 2019 issue of MechE Connects.

A New Look for the MITAA