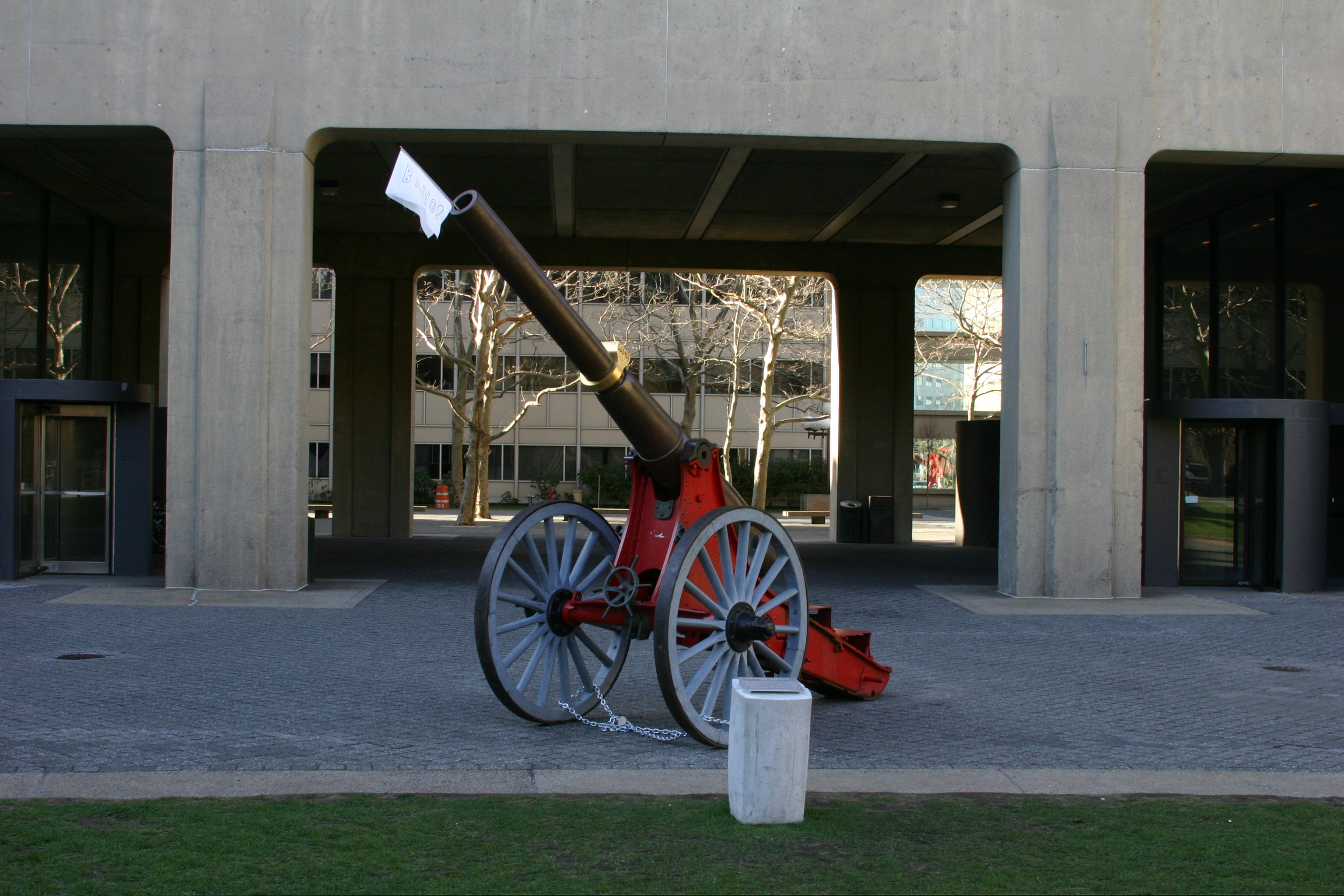 The 2006 heist of Caltech's Fleming Cannon might be MIT's most well-known hack. The theft, carried out by MIT students posing as the Howe & Ser Moving Company, is well-documented in the MIT Gallery of Hacks.

Until now, no one involved has publicly spoken about the hack. On Feb. 26, two members sat down with the Edgerton Center's Jim Bales and the Safety Office's Dave Barber to recount the months-long planning process and 10-day escapade. The discussion was recorded for a future MIT documentary on hacking.

Both members requested anonymity and will be henceforth referred to as Howe and Ser. In a Slice of MIT exclusive, ten previously untold details are below.

1. They initially wanted to hack a different cannon. Years before the heist, the future hackers came across the howitzer (Get it—Howe & Ser?) cannon permanently mounted on the Charles River Esplanade. “We said, ‘We should do something with this,’” Howe said. “We realized it was locked down and wasn’t wise. But we still liked the idea and we all knew that Caltech had a cannon.”

2. Almost 30 hackers were involved in the heist. Seven hackers made the cross-country trip to Pasadena: five drove non-stop from Cambridge and two arrived via plane. About 20 others assisted in logistics, helped construct the 21-pound replica Brass Rat, designed the plaque, and prepared for the cannon’s arrival.

3. Physically stealing the cannon might have been the easiest part. Using a winch truck, the hackers loaded the 3-ton cannon in about 15 minutes. They drove one block from Caltech’s campus before being pursued by a security guard and physical plant worker, who caught up with the truck and forced them to pull over.

4. The solution to all hacking problems? Social engineering. "Social engineering is convincing someone to do something that you want them to do," Howe said. And one hacker was an adept social engineer. With help from fake documents, uniforms, maps, and a doctored tow truck, he convinced the security guard that Howe & Ser were legitimate contractors. The security guard even provided directions and offered traffic cones.

5. A good back story always helps. During a 2005 reconnaissance mission to Caltech, hackers noticed that the cannon was situated on planks slowly sinking into the lawn.

"Our explanation was to move it somewhere else while they poured a concrete pedestal," Ser said. "People told us, 'Oh, of course! We were waiting for someone to make this better!'"

6. There was a run-in with the Pasadena police. After successfully evading the security guard, they parked on a residential side street and disguised the cannon—with 2x4 planks. A neighbor called in a noise complaint and police quickly arrived. "We got really nervous,” Howe said. “But once they realized we weren’t high school students, they basically said ‘whatever’ and just left."

7. Traffic in Los Angeles is bad. Driving with a cannon makes it worse. The original plan called for taking the cannon on the highway to the shipping location where it would be sent back to MIT. But the cannon’s weight cracked the truck's hitch, forcing the team to take surface roads and drive less than 25 miles per hour. A 12-mile ride took more than four hours.

8. Total cost of the hack: about $7,000. Once the cannon arrived at the shipping center, the team was physically unable to unload the cannon. Fortunately, one hacker had a sister involved in the film industry who connected them with a company that specialized in moving large props. The company offered their services for $1,000 but the hackers had already spent $6,000 on car rentals, shipping, disguises, and other fees. "Generally that’s a huge sum," Ser said. "But at that point we had the cannon, so we needed to do whatever it took."

9. The initial suspects? Not MIT. Before the cannon safely arrived in Cambridge, most pointed to Harvey Mudd College—who stole the same cannon exactly 20 years earlier—as the primary suspect. According to Howe, an anonymous phone call was eventually placed to Caltech. "The call basically said, 'The cannon is safe and you'll know where it is in a few days.'"

Harvey Mudd students did offer their assistance. "Their student body president called MIT and offered to pay for shipping if we sent them the cannon."

10. We'll never know the whole story. True to the hacker's code, Howe & Ser will never explain all of their secrets. "We left a bunch of details out of this story," Ser said. "There's a lot we'll never reveal. But for the record, we did not rent a helicopter."

This is unbelievably funny.

Well, though I'm a Rudd and never had any interest in Fleming, I always liked the cannon. Admittedly, I do have an interest in guns and military history. Personally, I think this MIT hack was pretty damned cool. Howe et Ser indeed. :D

A major facet of a successful hack is adept PR. Caltech came to MIT the year before on Campus Preview Weekend and pulled a bunch of lame "hacks" like making fake newspapers, handing out insulting t-shirts, and putting blow-up palm trees in trivially accessible locations. Did anyone at MIT care about those hacks? No. Did we want to show you how to hack properly? Yes.

Thus, despite your protestations about subcultures within Caltech, MIT hackers took a 3-ton piece of antique artillery out from under the noses of Caltech security, machined a massive, gold-plated ring, affixed it to the barrel of said artillery, and placed it 3000mi away on MIT's campus. For this, MIT and its hackers were rewarded with international press coverage.

No one cares it's Fleming House's cannon.

Cesar's right on this one.

Has anyone seen my shoe?

Guys, no one cares about the "Caltech cannon" except for Fleming House, one of the eight undergraduate houses. Most everyone else is indifferent or even slightly disdainful towards the cannon. It's as if we drove to MIT and spent seven thousand bucks stealing a statue from a frat house, or something like that.