On the Scene at the Creation of the Petrochemical Industry

The petrochemical industry came of age during World War II, ushering in the era of gasoline, polymers, and plastics. But it truly expanded after the war, helped along by pioneering chemical engineers such as Peter H. Spitz ’48, SM ’49.

Spitz’s family emigrated to the US from Austria in 1939, when he was 13, after the Nazis annexed that country. He discovered a passion for chemistry and physics at Germantown Friends School in Philadelphia and then earned a scholarship to MIT, where he majored in chemical engineering and got a master’s in chemical engineering practice. “I was never as interested in organic chemical laboratory research as in applying my education and skills to the development and commercialization of the research,” he says.

Above (video and image): Spitz spoke at a 2012 TEDx event at the New Jersey Institute of Technology about how petrochemical companies can reduce their carbon footprint and reduce the amount of byproducts and waste products in the manufacturing process.

Upon graduating, Spitz joined Standard Oil (Esso), where he helped design oil refineries. “The chemical engineering department had a very strong relationship with Esso Engineering,” he says. One of Spitz’s professors, Warren K. Lewis, Class of 1905, had invented a revolutionary fluid catalytic cracking process that was first commercialized by Esso during World War II. That invention, Spitz says, “was an important reason why the Allies had a huge amount of high-octane aviation gasoline to fight the German Luftwaffe.”

Spitz spent seven years at Esso Engineering designing petroleum refining units, including a first-of-its-kind fluid coker that led to the construction of seven other such plants. In 1956 he moved on to Scientific Design Company, cofounded by Ralph Landau, ScD ’41. There, Spitz says, “I was part of an MIT-educated cadre of chemical engineers who developed and commercialized several important petrochemical technologies.” Those included processes to produce molecules and compounds used in manufacturing of nylon and polyester fabrics and polyurethane plastics. He eventually founded his own consultancy, Chem Systems, later acquired by IBM. 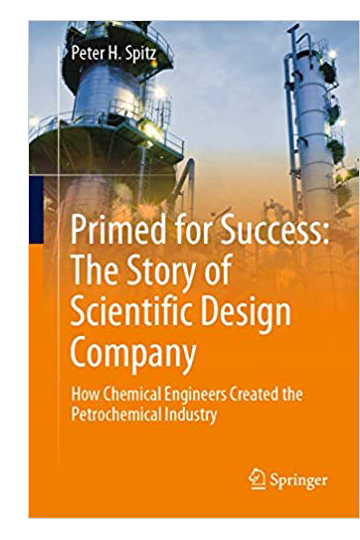 In his third book on the petrochemical industry, Primed for Success: The Story of Scientific Design Company (Springer, 2019), Spitz recounts how Scientific Design outmaneuvered and out-researched far bigger firms. The book reveals the critical role that chemical engineers—and MIT engineers in particular—played in creating a vast complex of synthetic rubber plants during World War II, using brand-new technologies. In the process, they shifted the chemical industry’s focus from coal, alcohol, and wood to petroleum. In fact, he adds, he could have subtitled the book “How MIT Chemical Engineers Created the Petrochemical Industry.”