Knocking on the Door of Innovation in Chile

“He was very humble. He never used to talk about it,” remembers Jayne Zeamer. She’s talking about her father, World War II veteran Jay Zeamer Jr. ’40, SM ’45 who won a Medal of Honor for his actions during a daring flight and fight in the Pacific region. What did he do? 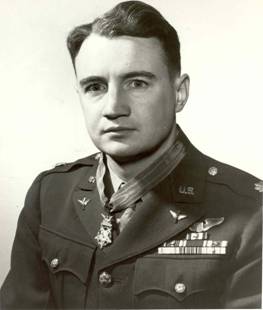 …On 16 June 1943, Maj. Zeamer volunteered as pilot of a bomber on an important photographic mapping mission covering the formidably defended area in the vicinity of Buka, Solomon Islands. While photographing the Buka airdrome, his crew observed about 20 enemy fighters on the field, many of them taking off. Despite the certainty of a dangerous attack by this strong force, Maj. Zeamer proceeded with his mapping run, even after the enemy attack began. In the ensuing engagement, Maj. Zeamer sustained gunshot wounds in both arms and legs, one leg being broken. Despite his injuries, he maneuvered the damaged plane so skillfully that his gunners were able to fight off the enemy during a running fight which lasted 40 minutes. The crew destroyed at least five hostile planes. -Medal of Honor Citation

“The first time I heard about it was from friends and teachers,” the younger Zeamer recalls. She says her father never talked about his wartime experiences. It was only after she and her four sisters learned of his heroism from friends that Zeamer began sharing stories.

Her father’s accomplishments may have resulted from overcoming challenges, she says. “He was such a determined individual.”

Zeamer was initially rejected from MIT but persevered. He enrolled in summer courses on campus and was accepted the following year.

After graduation, Zeamer enlisted in the Army with hopes of becoming a pilot—having fallen in love with planes through the MIT Flying Club.  When Zeamer’s poor vision dimmed that hope, he met with a doctor who prescribed eye exercises. Zeamer improved his vision, completed flight school, and was commissioned as a pilot in the US Army Air Corps. Initially he tested bombers in the US and flew anti-submarine patrols off the west coast. In 1942 during World War II, he was deployed first to Australia and then to New Guinea.

While stationed in New Guinea, Zeamer met another challenge, this time a welcome one—rehabilitating a beat-up airplane “His eyes lit up when he saw it—it was a piece of junk. But he was convinced he could work on it,” she recounts. That piece of junk was a battered B-17 bomber that would take Zeamer and his crew on that Medal of Honor mission.

Zeamer assembled a crew to work on and fly the B-17. He and his crew—fittingly nicknamed the Eager Beavers—used the plane for multiple missions before the mapping mission over Buka. His daughter says the crew’s handy work on the bomber—including outfitting the plane with more guns—helped fight off the enemy planes. Promoted to lieutenant colonel, he was also awarded Silver Stars, Distinguished Flying Crosses, a Purple Heart, and Air Medals.

The injuries Zeamer suffered in that mission affected him for the rest of his life, preventing him from working as a civil engineer. He soon returned to MIT to overcome this last obstacle and earned a master’s degree in aeronautical engineering.  He worked for as an aeronautical engineer for series of aerospace companies, including Raytheon, until his retirement in 1968.

Zeamer, who died in 2007, was most recently honored as the exemplar of the Class of 2014 at the United States Air Force Academy and inducted into the New Jersey Aviation Hall of Fame.

The MIT flying club can certainly take credit for positioning a hero in our history. Lt. Col. Zeamer found his passion through the club and his love for flying preserved the future of the B-17 that brought his crew back home. Can't wait for the book.

Knocking on the Door of Innovation in Chile