Update (November 19, 2020): The Alumni Helping Alumni program has seen a lot of growth since this story was first published, more than doubling its numbers. Currently, 149 alumni are involved.

Sarah Dash ’99 and Lane Anderson ’62 are on a Zoom chat—one of several conversations they’ve had this year, though they’ve never met in person. Dash is recalling a moment early in the coronavirus pandemic when her spirits were particularly low. Listening to a recording of the Schumann cello concerto featuring Anderson, she says, was the antidote that got her through the day. She gets a bit emotional as she shares this with him. While “there’s no upside to this pandemic,” she says, without it, the two surely would have never become acquainted. Based in Maryland and Monaco, respectively, they first connected in June through an initiative started by volunteer leaders in the Class of 1999.

“I knew about all of the challenges with social isolation, especially with older people, and I thought it would be a nice way to connect,” explains Dash of her motivation to enroll in the Alumni Helping Alumni program, which was started as a response to the pandemic by Class of 1999 president Christine Kornylak, Pooja Devendran ’99, and a handful of other classmates.

“There was just this feeling of: How could we help?” says Devendran. “There were so many MIT initiatives already—trying to develop vaccines, obtaining PPE. In considering where might there be a hole that we could fill as alumni, we kept coming back to connection and camaraderie.”

We were focused more on helping the seniors, but a lot of the ’99ers have felt like it’s been a therapeutic experience for them as well.

Kornylak adds that the group “decided to focus on social-emotional health because that’s something that we could dive right into—a way to bring the community together.” While the initial purpose was to check in on older alumni, the benefits have been mutual. “We were focused more on helping the seniors, but a lot of the ’99ers have felt like it’s been a therapeutic experience for them as well,” Kornylak says. “So I think that was a nice lesson—that help can come in many forms.”

After Kornylak and Devendran made a few calls to gauge interest among elder alums, the group created a sort of virtual pen pal program across the generations. They reached out to their entire class to find interested individuals as well as to members of the Cardinal & Gray Society—MIT alumni who graduated 50 or more years ago—with the help of that cohort’s chair, Rick Lufkin ’68.

The (MIT) Ties That Bind

Once alumni sign up for the program, Kornylak and Devendran typically pair them up with the aid of a simple prompt: their favorite place to relax while at MIT. All participants receive an email with the phone number and email address of their match (pairs may choose the mode of communication they prefer); the Class of ’99 alum is expected to reach out within a day.

Dash and Anderson say that their shared experience of having felt somewhat like misfits at MIT is what has created a fast friendship. “I must say that Sarah’s phone calls were a great help getting through eight weeks of confinement,” Anderson says. “They were real high points. Our first conversation lasted for an hour and 20 minutes and I just had the best damn time!” 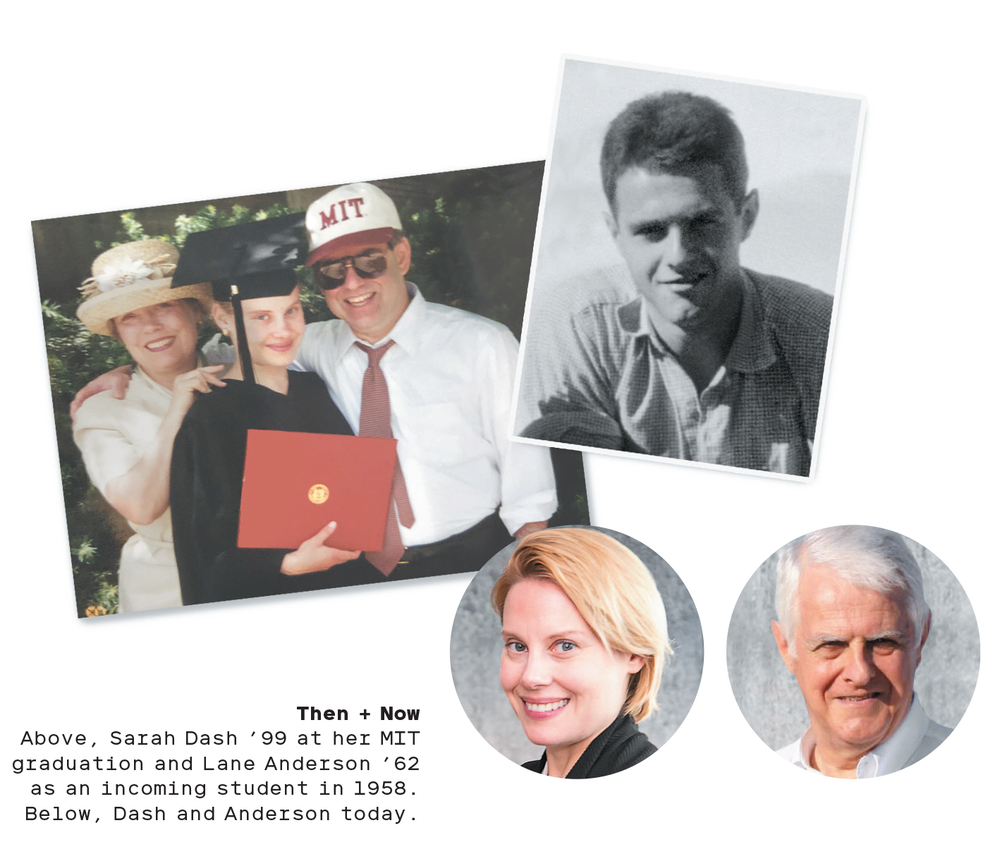 The two bonded over the challenges they faced at MIT and their love for the arts and humanities. Both switched majors to Course 21 and took off-campus dance classes. “It was almost uncanny, some of the similarities,” says Dash. These also include ties to France and a love of music (Anderson is retired from the position of principal cellist of the Monte-Carlo Philharmonic Orchestra).

As president and CEO of the nonprofit Alliance for Health Policy, Dash spends much of her professional time in conversations about the pandemic. She says talking with Anderson has been a welcome reprieve, and that reflecting on her time at MIT has been healing for her. “I think Lane helped me tremendously, connecting over our shared perspective, even from years ago,” she says.

Through Covid, and Beyond

Gary Fallick ’58, SM ’60, and Irene Kim ’99 also hit it off quickly, united by MIT experiences like p-sets and the feeling of drinking from a firehose—even if Fallick hadn’t used those terms as a student. “What MIT people have in common is the joy of learning,” says Kim, a liver and kidney transplant surgeon at Cedars-Sinai Medical Center in Los Angeles.

Their initial email exchange progressed to phone calls, but the pair have also continued their written correspondence. “It’s a fun message to get in my inbox, whenever Gary sends something to me,” Kim says. “It’s been a lot of fun hearing about what MIT was like in the past.” For instance, she was fascinated to hear Fallick’s description of the MIT 1950s dating scene, including the tale of how he met his wife on a double date (she was his roommate’s date) and then asked her out when he spotted her on Bay State Road outside of his fraternity house.

My hope is that at some future reunion, Gary and I get to see each other, hug one another, grab a drink together.

“I consider myself lucky that I got paired up with Irene,” says Fallick, who is retired from a career in technical marketing and serves as president of Lexington at Home, an organization of residents in his Massachusetts town who wish to age in place. Fallick has volunteered as his MIT class secretary for 25 years and has also been involved in reunion planning. Kim says: “My hope is that at some future reunion, Gary and I get to see each other, hug one another, grab a drink together.” 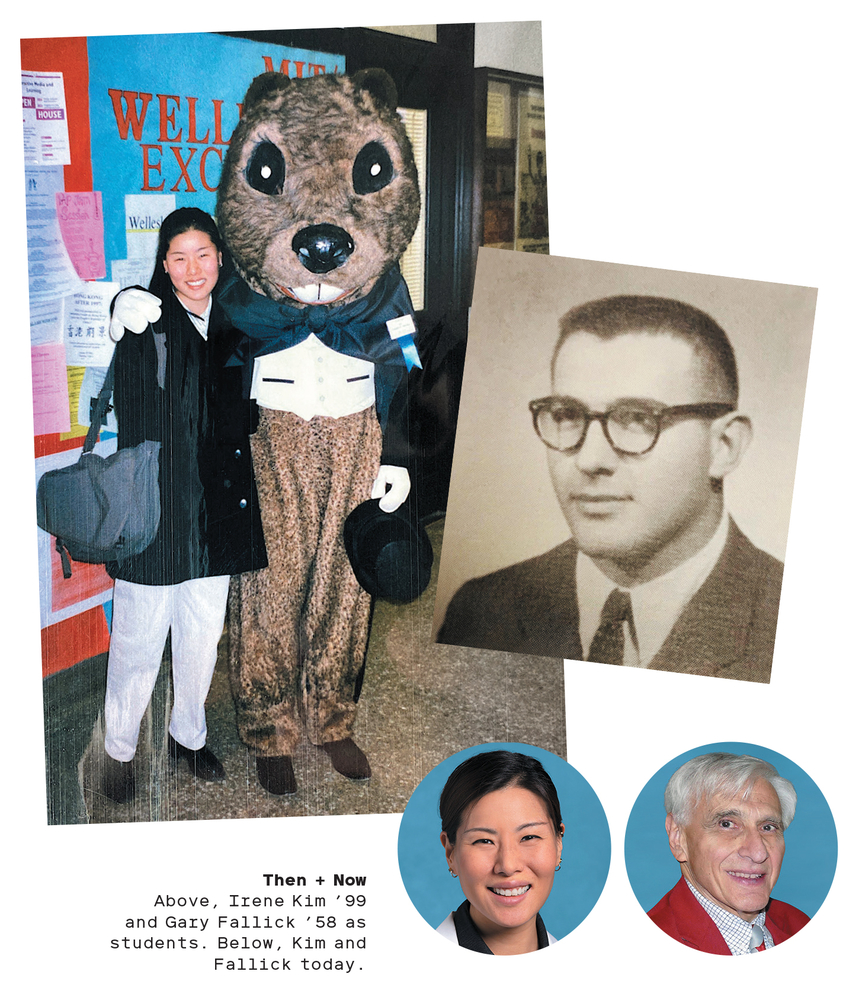 What started as a group of MIT classmates brainstorming ways to help now involves nearly 60 alumni exchanging emails, phone calls, video chats, photos, and memories, sometimes daily. Its organizers want to see this seed of an idea continue to develop. In August, Lufkin was planning to reach out to more potential participants from the Class of 1970 and earlier classes. “The concept of lockdown, at least for the Cardinal & Gray demographic, is probably going to be with us for months yet, so the unmet need is very real,” he says.

Would you like to participate in Alumni Helping Alumni? View sign-up forms for Cardinal and Gray Society members and Class of 1999 members.

Those from other classes who would like help in getting a similar program started are encouraged to contact Christine Kornylak '99 via the MIT Club of Northern California.