What’s the worst part of air travel? For many people it’s the security bottleneck. That’s the answer Ben Levitt SM ’14 and Katy O’Brien SM ’15 got repeatedly when tasked with identifying a common travel complaint and creating a solution for it as part of 15.783 Product Design and Development. Their solution? OneBin, a multi-compartment security container that aims to speed up security lines while clarifying TSA requirements.

She and Levitt identified security bins as a big cause of slowdowns—with a lack of space for items and ever-changing security protocols from the TSA, the team saw room to improve. That improvement is a larger bin—twice the size of bins being used currently by TSA—mitigating the need for multiple bins per person. Each bin has compartments for items like laptops and shoes along with decals to identify which items should go in the bin—no need to worry if you heard the TSA agent properly.

The simplicity of the OneBin design is what inspired Levitt and O’Brien to take the prototype out of the classroom and to potential customers. “It’s typical of a lot of good ideas—you’re always saying ‘Why didn’t I think of that,’” O’Brien recalls. “When we started to get that feedback, we grasped that the bin had a lot of value—it’s a simple idea, but it solves a huge problem.” OneBin’s design found early praise, honored as a finalist at the 2013 American Society of Mechanical Engineers (ASME) iShow and recruited on CNBC’s Make Me a Millionaire Inventor. Levitt and O’Brien are currently working with the TSA Innovation Task Force to explore possible implementation at airports. 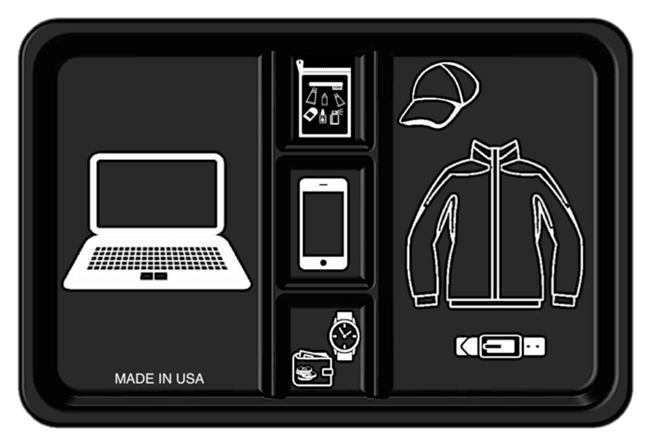 But air travel isn’t the only industry that can benefit from OneBin—the design is currently being used in a pilot program with Norwegian Cruise Line, where it’s translated to success for the company. “We had the lead security officer for Norwegian Cruise Line tell us that as soon Chinese travelers saw the labels on the bin, there was no need to explain that they were searching their belongings for security,” Levitt says. “It’s time saving as well as a communication tool.” What helps the bins work for cruise lines and airports is the versatility of the decals that note what items should be in the bin. “There’s a flexibility to the design. From airports, to cruise ships to court houses, different items need to be scanned. We knew to make this a product that could evolve,” O’Brien says.

If you’re waiting for OneBin to make your travel easier, you’re not alone. Levitt shows OneBin to TSA agents whenever he’s traveling—handing out business cards with the OneBin design on them. “The reaction is incredible from agents. Just blown away,” he says. “Something so simple can really speed up the process.” Adds O’Brien, “We’re super excited about the project, it’s never something that I thought I would be really passionate about. But it’s something that has become really important to me. We just want to make that improvement and make people’s lives a little less stressful.”