From delivering packages to filming movies, drones have the potential to replace human labor in many industries. But drones don’t have to be bad news for workers, says Dave Pitman ’06, MEng ’10 creator of drone flying app, Control Tower.

“Professionals have the opportunity to become better at their jobs by using the information they can gain from drones,” he says. Though drones can make jobs easier in a variety of industries—like construction or insurance adjusting—the challenge lies in making drone technology accessible. That’s why he and cofounder Paul Quimby ’12 MEng ’13 created Control Tower—a smartphone app that relies on artificial intelligence to help drone users navigate airspace, comply with regulations, and create reports with no special skills or knowledge required. “I want to make it so people have access to this sophisticated technology without having to become a top gun drone pilot,” he says.

Pitman’s inspiration for Control Tower started with the debut of the first iPhone in 2007. Already researching micro drones as a graduate student in computer science, Pitman was inspired by the potential collaboration between smartphones and the unmanned aerial vehicles (UAV). “I thought ‘Could we make it so that somebody could pick up an iPhone and fly a drone that they’ve never seen before?’” he remembers. With the goal to make drone piloting easier and more universal, Pitman, with help from Quimby (a UROP student at the time) built an iPhone app to control a drone in a remote location. Pitman tested the first-of-its-kind app on students at MIT in 2008 and saw that users found it easy to control the drone relying only on a video feed from the UAV to the iPhone. Although Pitman and Quimby knew they had a winning idea—they had to wait for the industry to catch up. “We had to step back and wait for the research and rest of the environment around drones to mature before we could launch the company,” he says. 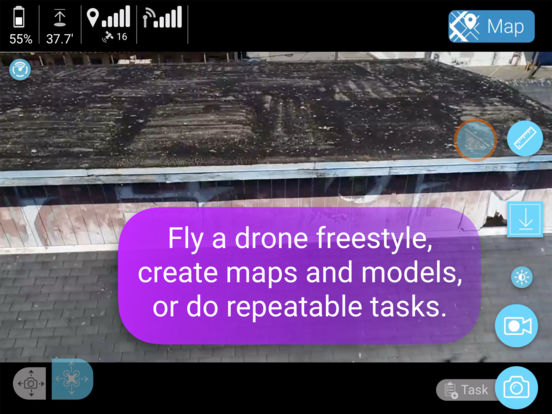 Pitman and Quimby launched drone technology company Converge and the Control Tower app launched this fall. Prior to launch, Pitman and Quimby worked as consultants in the drone industry learning the many pain points of adding drones to industry operations. The most common problem? Learning which airspace to fly in.  “We would spends hours figuring out whether regulations would let us fly a drone at a single location,” Pitman says. “Like good engineers we thought, ‘Can technology fix this problem?’” It can—one of the fundamental features of Control Tower is its safety compliance AI that identifies the regulations for specific airspace a user wants to fly in. The app automatically restricts users from flying in any airspace they are not permitted to by regulations. “Where ever possible, we use AI to create the best outcome for compiling the regulations, but at other points, you still need the user involved,” he says.

Pitman and Quimby adesigned the app to anticipate needs of individuals—like if a drone flyer needs a 360-degree view of a building, there’s no need to manually steer and hope for the best. “The AI handles a lot of the flying aspects so you can think about your job and what you’re trying to accomplish. If you need a specific angle or resolution, the app can do that,” he says. “It’s about stepping back and thinking about the goals users have and putting that back in the AI.”

Control Tower was designed with industry in mind, with top users being insurance companies, but the app is accessible to anyone, commercial or otherwise, and works with 95 percent of drones currently on the market. Pitman says that many facets of the app, from flying assistance to reports, can be tied back to specific classes at MIT. “I took classes in AeroAstro, architecture, and the Media Lab,” Pitman says. “The goal was to gain more knowledge about everything from how people interact with technology to how they use physical controls.”

Just as the app helps drone users get a different view of their work, Pitman says his time at MIT gave him a different outlook as well. “How I felt going into MIT was very different than I felt coming out of it,” he says.  “There’s now an obligation to try to improve the state of the world around me by leveraging what I learned at MIT.”

Combating Record Unemployment with the Help of Strangers

Literati CTO Finds “Tech for Good” in Boxes of Books

A Breath of Fresh Air in Video Games