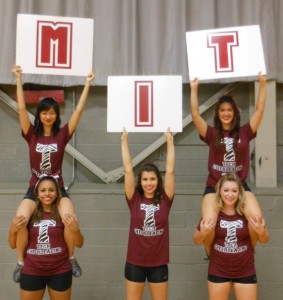 In the midst of one of the most successful athletic years in MIT history, another sport will make history this spring: cheerleading. For the first time in the club sport's 50-year history, the MIT Cheerleading team has received a bid to compete for the National Cheerleading Association Collegiate Cheer and Dance Championship.

The 19-person co-ed team—a mix of graduate and undergraduate students—is a fixture at varsity football and basketball games, occasionally cheers for men's and women's rugby and men's crew, and is a regular participant in cheerleading competitions. [Watch some of the team's cheers—including one dedicated to the International Space Station.] 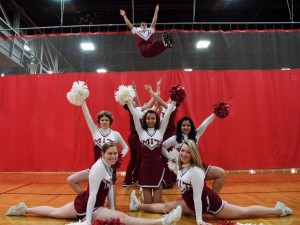 Science and cheerleading might seem like a dichotomy—a misconception that the team is working to dispel. On Science Cheerleader, co-captain Danielle Olson wrote about the team's unique place on a campus that is unfairly stereotyped as "socially awkward, nerdy, and generally atypical of what is considered mainstream."

From “We ARE Science Cheerleaders!”:

"It is interesting to see the reactions of people who would never expect someone like me or my fellow cheerleaders to go to a school like MIT, or to be studying engineering. I take pleasure in being an ambassador of changing the stereotypes of what it means to be an engineer, especially as a young woman of color, and also as a cheerleader."

The 2013 national championship, which will feature more than 100 other schools, will be held on April 10-14 and televised nationally on the CBS Sports Network.

As a club sport, cheerleading is a student-run organization and relies on donations from the MIT community to help provide uniforms, travel, competition fees, and other expenses. Donations to the team can be made through a specific designation at MIT Giving or the team’s GoFundMe Page.

Slice will monitor the squad’s progress and report back after the competition. Good luck, MIT Cheerleading!

My photos from the cheerleaders at men's basketball games over the past four years, including the unforgettable Final Four appearance last year: http://rlk.smugmug.com/Sports/Cheerleading/MIT-Cheerleaders/28323968_sJwDdw#!i=1752997671&amp;k=gwLWP3j .