The Hub of the Local Robotics Industry 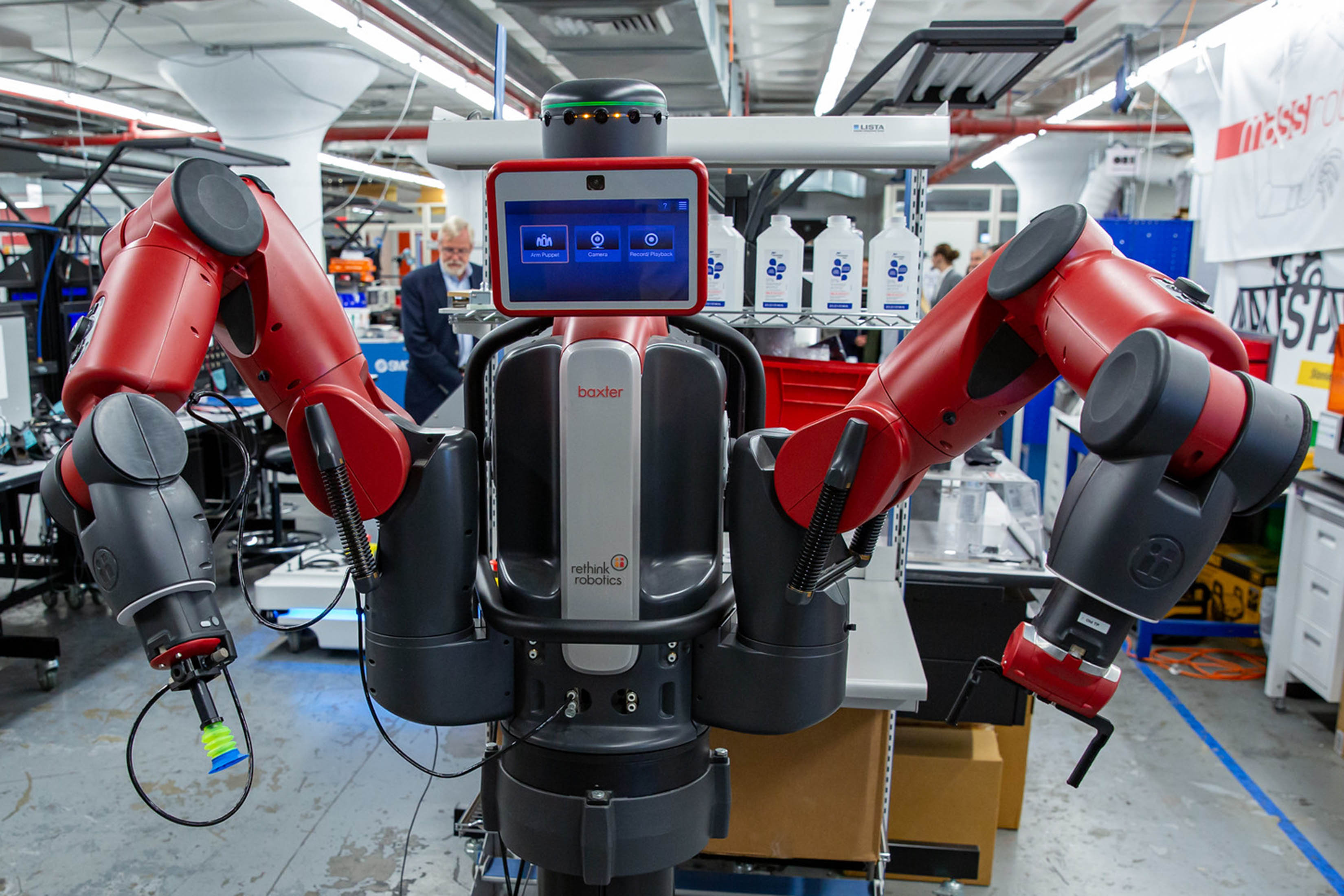 The MIT spinout Ori attracted a lot of attention when it unveiled its shapeshifting furniture prototypes in 2014. But after the founders left MIT, they faced a number of daunting challenges. Where would they find the space to build and demo their apartment-scale products? How would they get access to the machines and equipment necessary for prototyping? How would they decide on the control systems and software to run with their new furniture? Did anyone care about its innovations?

Ori, which signed a global agreement with Ikea in 2019, got help with all of those challenges when it found a home in MassRobotics, a nonprofit that incubates startups in addition to many other networking, education, and industry-building initiatives.

Ori is one of over 100 young companies MassRobotics has supported since its founding in 2014. With more than 40,000 square feet of office and lab space, MassRobotics’ headquarters in Boston’s Seaport District holds over 30 testing robots, prototyping machines, 3-D printers, and more.

Today MassRobotics works with hundreds of companies of all sizes, from startups to large corporate partners like Amazon, Google, and Mitsubishi Electric, fostering collaboration and advancing the robotics industry by publishing standards, hosting events, and organizing educational workshops to inspire the next generation of roboticists.

“MassRobotics is growing the robotics ecosystem in Massachusetts and beyond,” says Daniela Rus, director of the Computer Science and Artificial Intelligence Laboratory (CSAIL) at MIT, who has served on the board of MassRobotics since its inception. “It’s doing so much more than helping startups. They work with the academic community on grants, they act as matchmaker between companies and research groups, they have educational programs for high school students and facilitate internships, and it’s also working on diversity and inclusion.”

[MIT alumni are] all hackers. We make things happen. We see a problem or a need and we fix it.

Just as MIT’s mission emphasizes translating knowledge into impact, MassRobotics’ mission is to help roboticists and entrepreneurs make a positive impact by furthering a field that most agree will play an increasingly large role in our work and personal lives.

“We have a job to envision a future that is better, more equitable and sustainable than the past, and then make it happen,” says Daniel Theobald ’95 SM ’98, who co-founded MassRobotics with Fady Saad SM ’13, Tye Brady ’99, Steve Paschall SM ’04, and Joyce Sidopoulos.

Bringing an Industry Together

Joyce Sidopoulos, who was working at the Massachusetts Technology Leadership Council (Mass TLC) at the time, connected the pair with Brady and Paschall, who were working on a similar idea while at Draper in Cambridge.

“Before MassRobotics, robotics startups were creating amazing technologies, but they couldn’t easily break through to a commercialized product, because even if you have a working prototype, you can’t ship anything, and investors want to see validation,” Saad says. “Our motivation for founding MassRobotics was helping more of these companies become successful.”

Early on, the founders worked with MIT’s Industrial Liaison Program to get input from robotics companies and received help from people including Liz Reynolds, a principal research scientist at MIT and executive director of the MIT Industrial Performance Center. The first check was written by Gururaj Deshpande, founder of the MIT Deshpande Center for Technological Innovation. Today, dozens of corporate partners provide funding as well as the state of Massachusetts.

None of the founders think it’s a coincidence that so many of them hail from MIT.

“At commencement, [President L. Rafael Reif] gave a message that I’ll never forget: He said, ‘Go hack the world,’” says Saad, who also recently launched an investment firm for early-stage robotics companies called Cybernetix Ventures. “I think Reif’s message captures the DNA of MIT alumni. We’re all hackers. We make things happen. We see a problem or a need and we fix it.”

Of course, MIT has also played a huge role in bolstering the local robotics ecosystem that MassRobotics seeks to foster.

“A lot of talent, tech, and ideas are at MIT, but also a number of startups have come directly out of MIT and we house a number of them,” MassRobotics executive director Tom Ryden says. “That’s huge because it’s one thing to create technology, but creating companies is huge for the ecosystem and I think MIT does that exceptionally well.”

One of MassRobotics’ lead educational programs is geared toward female high school students from diverse backgrounds. The program includes six months of education during weekends or summer vacation and a guaranteed internship at a local robotics company.

MassRobotics also recently announced a new “Robotics Medal” that will be awarded each year to a female researcher that has made significant discoveries or advances in robotics. The medal comes with a $50,000 prize and a fellowship that will give the recipient access to MassRobotics facilities.

“This is the first time in our field we have such a visible prize for a female roboticist,” says Rus, who is also the Andrew and Erna Viterbi Professor of Electrical Engineering and Computer Science at MIT. “I hope this sends a positive message to all the young aspiring roboticists. Robotics is an exciting field of work with the important mission to develop intelligent tools that help people with physical and cognitive work.”

Meanwhile, MIT’s connections with MassRobotics have come full circle: After years of collaboration, one of the first graduates of MassRobotics’ educational courses just finished her first year as an undergraduate in mechanical engineering at MIT.

The impact of MassRobotics’ educational programs hit home for Theobald a few years ago when he got a letter from a young woman who told him they had changed her life.

“The problem with robotics education is it’s very easy for young people to say, ‘Oh that’s hard’ and move on,” Theobald says. “Getting them to sit down and actually build something and realize what they can do is so powerful.”

A few weeks ago, Theobald was at MassRobotics to meet a group of German business leaders when he got off the elevator on the wrong floor and stumbled into a STEM education session with a group of middle schoolers. He could have just as easily walked into a networking session between startups and business leaders or, as Rus did recently, run into Bloomberg journalists hosting a television segment on the robotics industry.

The breadth of activities hosted by MassRobotics is a testament to the organization’s commitment to advancing every aspect of the industry.

“Robotics is the most challenging engineering endeavor humanity has ever taken on because it involves electrical engineering, mechanical engineering, software — plus you’re trying to emulate human behavior and intelligence — so it requires the best of artificial intelligence,” Theobald says. “It all has to come together for successful robotics. That’s what we help do.”