In the tournament’s championship round, the Harvard-Yale game—three separate hacks that unfolded on national television—defeated the Caltech Cannon Heist, a 2006 prank that transported Caltech’s three-ton Fleming House cannon more than 2,500 miles undetected to MIT campus, by a score of 63-37 percent. 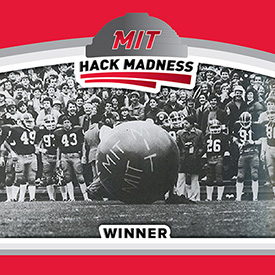 In total, the football game collected a tournament-high 5,045 votes and overwhelming defeated its opponents—including an early favorite, the Smoot—in each round. On Facebook, Scott Berkenblit ’86, SM ’90, PhD ’96 called the game “a hack for the ages.” “It was sad to have to vote against Smoot (sorry, Ollie),” Bruce Bottomly ’65 wrote on Facebook. “But nothing can beat Harvard-Yale in terms of MIT creativity, complexity, skill, stealth, national attention, and establishment of infinite bragging rights against that place down the street in Cambridge.” The more-recent Cannon Heist put a valiant effort throughout the tournament, including winning by a tournament-best margin of 86 percent in Round 2 and soundly defeating Tetris on Bldg. 54—the so-called “Holy Grail of Hacks”—in the penultimate round. Overall, the two-week tournament generated nearly 29,000 votes on Slice of MIT and social media and hopefully generated a significant amount of Tech nostalgia and polite disagreements. Choosing 32 hacks from MIT’s 153-year history was difficult and subjective—some favorites were undoubtedly omitted—and Slice respects all viewpoints of what truly is the MIT community’s favorite hack. Thanks to all of the voters, especially those who shared opinions on Alumni Association social media. Five of our favorite comments:

“Dirty little secret: this is what we *really* do at MIT.” - Robert L Krawitz ’87 “I vote for Cow on Dome! My great-grandfather is milking the cow!” - Sophia Edwards, great-granddaughter of William A. Pitbladdo ’31

“My dad was there...a Harvard Grad. He fully had to acknowledge MIT was the winner, hands down!” - Elise Rose ’86, on the Harvard-Yale Game

“I still don't know how they did all that (and I read the narrative.) The Brass Rat put it over the top.” - David Plass ’90, on the Caltech Cannon Heist

“I was there for the ‘snow in shower.’ I don’t remember whose idea it was to call the newspaper, but it was a cool idea and they fell for it hook, line, and sinker. And the story was picked up by wire services and ran around the world. Best part was the sub-head of the front page story in Boston…went something like: Cold Air + Steam => Snow!” - Paul Epstein ’51

For more on the tournament, view the completed bracket and overall voting results. Re-live the tournament and read descriptions on all 32 hacks in the original tournament bracket. Congratulations, Harvard-Yale Game!

While at CalTech for a conference recently I saw The Cannon in front of Flemming House. Of course, I had to stop and take a picture, noting the very heavy chain and lock now securing it for some odd reason (which I explained to my amused colleagues)!

Fond memories of 'going hacking' at 0x30 hrs after fueling on chocolatey goodness at the 24hr Coffee House, checking to see if anyone else had signed in in various hidden places and to make sure that the door mechanism for 77 Mass Ave was in good working order… The old Ashdown basement was a great place before the addition of more rooms (and the eventual total gutting &amp; rebuild!).

A correction to the class year in the quote from me at the end of the "... Hack Madness Champion" article: I'm Class of '69, NOT '51. The "Snow in Shower" hack I commented on was in 1968. I remember some students seemed to stay around as undergrads forever, but a '51 student hanging around to 1968 would have been a stretch.

Yay! OK, the balloon and DKE get most of the press, but congratulations to my co-conspirators from the UA, Marching Band, THA, and randoms on everything else that happened and didn't happen (darn failure of the sound system hack) at that Game on also being a part of the greatest day of hacks. And the Howe &amp; Ser folk were extremely worthy opponents.

As one of the "perps" in 1982 I'm obviously biased toward the MIT DKE H-Y game hack, but regardless I was glad to see two off-campus hacks make the final round.

While hacks involving the Great Dome, Green building etc are nice, they pale in comparison to the exponentially increased complexity and risk inherent to off-campus hacks. Somehow we managed to evade Harvard campus police, the MDC and Cambridge PD on eight separate nights over a two week period, with our irreplaceable balloon inflation device in tow. And in some ways triggering the device on the day of the game--with tens of thousands of potential witnesses in attendance--proved to be the most difficult feat of all.

Congrats to our fellow finalists of the CalTech Cannon Heist crew and to all of the other very deserving hackers in the tourney. I'd like to think that throughout the years, despite whatever generational differences we may or may not have, we've all be doing our damnedest to preserve MIT as a safe haven for utterly senseless yet amusing and clever hacks.

I’m honored to have had my observations enshrined here in the post-tournament analysis. It’s right up there with having had my (now obsolete) thesis selected for inclusion in the Engineering Library. Again, to Ollie Smoot—your name and memories of the Smoot hack will live forever. And to the CalTech Heist hackers, it was a marvel of planning and execution, and a well deserved target.

A little known fact: Growing up in Massachusetts, I lucked into the opportunity to be an usher at the Harvard football games, starting when I was a mere 10 years old. I kept it up through graduation from MIT, by then having advanced to the position of Section Head Usher, albeit on the visitors’ side of the stadium.

There were some good parties in Harvard Square after those games, and they didn’t check student IDs. If MIT had done this hack 20 years earlier, I would have been there!