The Guy Who Never Sits Down 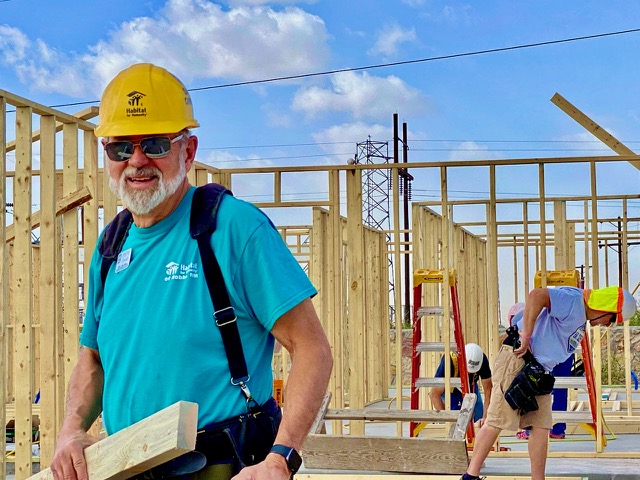 Although Joseph “Pepe” Fields ’67 has an MIT degree in chemistry, he’s spent his career not in the laboratory or the classroom but working all over the world in international management—and, most recently, driving a recreational vehicle all over the US to build affordable housing with a Habitat for Humanity program called RV Care-A-Vanners.

The organization consists of dedicated RV owners who work as volunteer builders, traveling wherever they’re needed to construct houses from scratch using all new materials, doing everything except licensed trade jobs such as electrical and plumbing work. “It grew out of Habitat,” explains Fields. “RVers would go to different affiliates and say, ‘We’re parked in the campsite up the road; is there anything we can do for you for the next couple of weeks?’” It became frequent enough that they decided to organize it.

For Fields, it’s the latest expression of a passion for volunteer service that’s shaped his entire life. Hailing from a small town in Colorado, Fields discovered his zeal for volunteering at age 15, working for his local Red Cross chapter and volunteer fire department and rescue squad, and saw no reason to stop when he came to MIT. “I looked up the local Red Cross chapter and started volunteering for them,” says Fields, who at 18 was the minimum age for a first aid instructor for the Red Cross. “Friday and Saturday evenings, I went to Mount Auburn Hospital and volunteered in the emergency room there to get some experience on what happened on ‘second aid,’ if you will.” As if all that wasn’t already enough, atop the demanding schedule of an MIT undergrad, he also played in the MIT brass choir.

His volunteer work eventually inspired a change of direction. “My original idea was that I wanted to be a chemist undergraduate, microbiologist graduate, and do medical research, because my idea was to contribute to society through medical research. But I found I had a knack for working with people, especially internationally. I spent a couple of summers working under the auspices of the Red Cross with the Mexican national Red Cross society, helping them develop programs for youth. And so I said, ‘Okay, I need to take a stop here and rethink this.’”

After graduation, followed by military service in Vietnam, Fields married and got a master’s degree in international management from UC Berkeley. “I worked, and in some cases lived, in 20 some countries during my career,” he notes, helping to start and run various manufacturing facilities around the world before finally returning to the US to work as a management consultant and part-time teacher. It wasn’t long before his irrepressible urge to serve others found a new outlet.

Fields (far left) poses with fellow volunteers at a jobsite in Ft. Meyers, Florida in April 2019.

Despite what he describes as “easing into retirement slowly,” the purchase of a small motor home in 2014 by Fields and his wife prompted them to pursue their next adventure. “I’m not much for sitting around drinking gin and tonics all the time,” Fields laughs. “My wife heard about the Care-A-Vanners and she said, ‘We could do that.’ I looked it up online and, by golly, that sounded exactly like what I wanted to do. And we’ve been trying to build two to four months a year ever since then.”

I’ve set cabinets, I’ve put in countertops, I’ve laid floor, I’ve put in tile in the bathroom, I’ve set trusses. I’ve put roofs on, I’ve made fence, I’ve laid sod, I’ve swept the floors―just about everything you can think of.

In total, he and his wife have been involved in 25 builds since starting with the organization in 2014, with projects in California, Montana, Colorado, New Mexico, Texas, and Florida—each lasting around 1–2 weeks. “In 2021, we spent two weeks in Paradise, California, on a disaster rebuild from the 2018 wildfires,” recalls Fields. “We built for two weeks in Berthoud, Colorado, and we finished the year with an eight-week trip where we built in two towns in New Mexico, Las Cruces and Hobbs.”

The work offers multiple rewards, Fields explains. “One of the fun things about being a volunteer builder is that you are a wide-spectrum worker. You don’t just do carpentry work or just lay floor or just hang curtains. I’ve set cabinets, I’ve put in countertops, I’ve laid floor, I’ve put in tile in the bathroom, I’ve set trusses. I’ve put roofs on, I’ve made fence, I’ve laid sod, I’ve swept the floors―just about everything you can think of.”

Fields and his wife, Alma, in Taos, New Mexico, laying the first course of adobe atop a cement block footer.

But the best part, he says, is being able to go back to a home they’ve helped to build and see the kids playing in the yard. “So many of the families come from housing situations where the kids don’t dare go outdoors. And all of a sudden here they are, they’ve got their tricycles, they’re screaming up and down the street, they’re playing with their dogs. That to me is the most rewarding.”

He has no plans to slow down anytime soon. “As long as I can do something, I’m going to keep going. I don’t like TV; I like to be out and doing things. I’m the guy who never sits down. I sit down for meals, that’s about it. I just like to keep moving.”

Are you engaged in volunteer service activities like Joseph Fields? Check out the MIT Alumni Better World Service Initiative to connect with MIT alums working to meet great societal challenges through their volunteer efforts. Submit a service project you are involved in or join an existing project (like Pepe's Care-A-Vanner effort!).