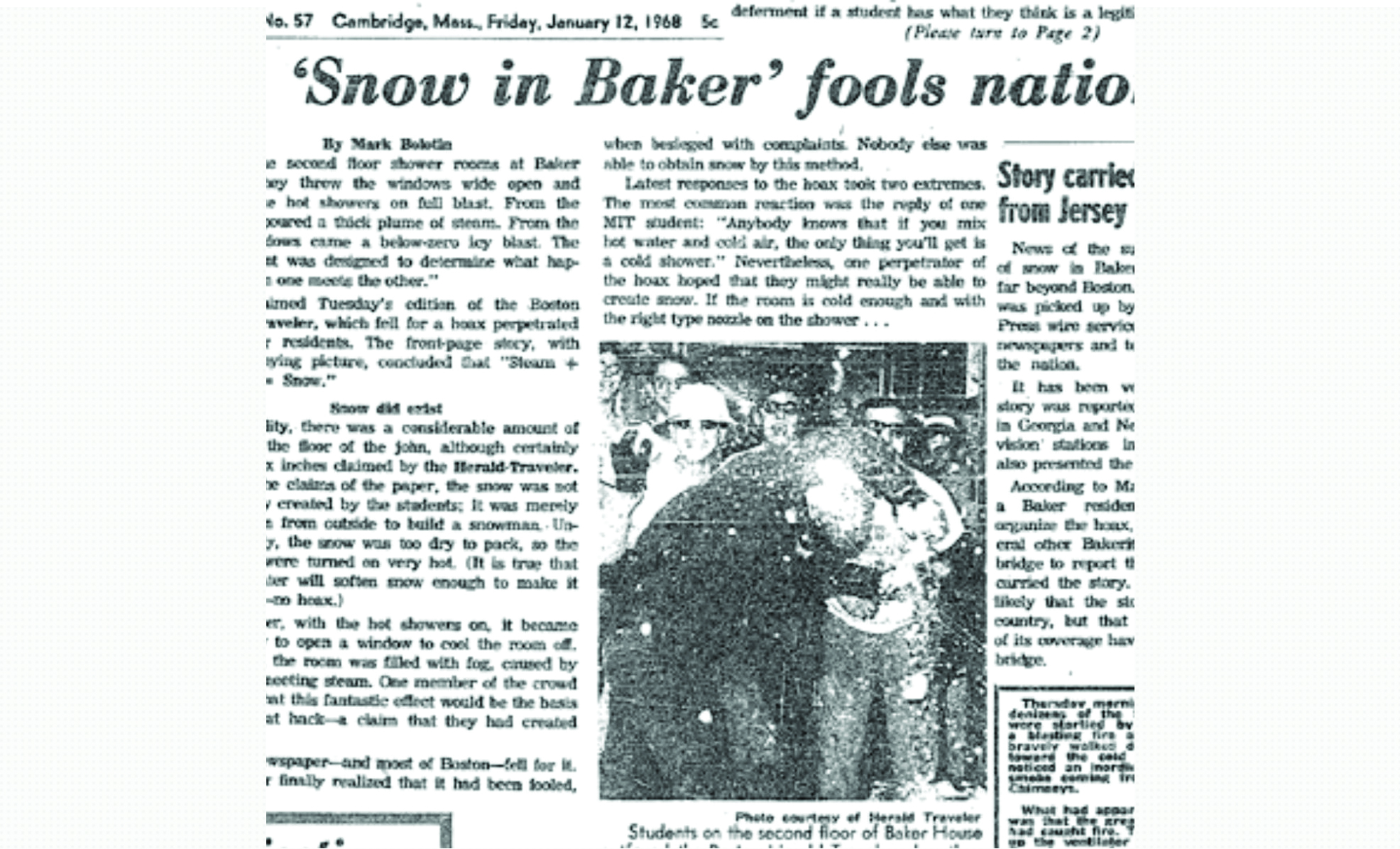 January 12, 2018, marks the 50th anniversary of MIT's Great Snow Hack, when a group of MIT students convinced the Boston Herald Traveler newspaper that they had invented a shower nozzle that makes snow. Read the story below, originally published in April 2013, to celebrate the hack and find out how they pulled it off.

Hacks at MIT are a pastime that prides itself on secrecy—watching a hack unfold in anonymity is part of the fun. Despite this, most recent hacks are well-chronicled. The online MIT Gallery of Hacks has summaries of more than 200 Institute hacks dating back to 1989.

There is less online information on hacks pre-1989, but they are no less imaginative and clever. Inspired by a recent revelation, one alumnus has provided Slice of MIT with detailed info a decades-old hack that briefly gained national media attention: The Great Snow Hack of 1968.

The alum requested anonymity and will be henceforth referred to as Mr. Snow.

Unlike many hacks that take months of preparation, the Great Snow Hack wasn’t planned. It was the result of boredom on a freezing-cold January night.

“It was a bitter winter, even for New England,” Mr. Snow says. “We were bored to death in the dorm and there was so much snow outside. So we thought, ‘Let’s go have a massive snowball fight—inside.’”

We told the photographer, ‘If you want to stop the snow, just shut the shower off!'

The students gathered buckets of snow and filled the dorm's shower stalls. But the dry air made it difficult to mold a snowball and the students turned on the shower to get the snow more damp.

“It caused a huge amount of steam,” Mr. Snow says. “You couldn’t see two inches in front of your face. So we opened the windows and let a bitter wind into the stall. It looked like a complete blizzard.”

Sensing the opportunity for a hack, the students called the Boston Herald Traveler. “We called the paper and said, ‘We figured out a way to make snow in the shower.”

The Traveler sent a reporter and a photographer. When the photographer arrived, he entered the shower stalls and was met with a mix freezing wind, whirling snow, and hazy steam.

“The photographer said, ‘I can’t take a picture. You can’t see anything,’” Mr. Snow says. “We told him, ‘If you want to stop the snow, just shut the shower off.'”

The students convinced The Traveler that they had invented a shower nozzle that makes snow. The paper fell for the gag and featured the crew in a photo and article in the next day’s paper. (The newspaper is occasionally on display at the MIT Museum.)

More publicity followed and the Baker House students were contacted by Time, Newsweek, the Associated Press, and other wire services.

“It caused a big sensation in Boston—other schools around the city tried to recreate it,” he says. “Other schools called us and said, ‘How do you do it? We’re not doing it right.’"

Snow in the shower also became a hot topic on call-in radio and a subject of scorn from another Cambridge university.

“Harvard students got upset and call a few radio stations saying it was impossible—which it was,” he says. “Of course, we had some engineering majors call the same shows and say, ‘Of course Harvard can’t do it—they’re using the wrong-size nozzle. They don’t know how to engineer a correct shower system.’”

The Baker house students eventually got a cease-and-desist order from an MIT dean, but the hack had been accomplished. An evening or boredom resulted in a brief media sensation.

“The hack wasn’t making fake snow—it was the gullibility of the press,” he says, “They fell for the idea that the MIT students had created a snow-making machine. They were never smart enough to say, ‘Show us how to do this in another shower.’”

Snow making machines are now common on ski slopes. Had they been invented then? If not, perhaps Baker House should take credit for inspiring other engineers to make the attempt and succeed.

I was a fresshman at Baker House at that time. My dorm room was right next to the shower in question. It was freezing and we were bored. However, the snow was originally brought in to make a snowman, not to have a snowball fight.

Another hack from December 1957, Baker House. (We will call this one a local hack, since it didn't get outside publicity.) Guy named Jerry K who lived in room 245 right next to my triplex 246 at the end of the hall. He was so intensely fastidious about his dorm room, sometimes polishing the floor to a high shine and leaving the door open for display, lights aimed to enhance the shine - that we figured we had to do something about that. When he left for Xmas break, we removed the door frame and carefully bricked over the spot where it had been, so as to match exactly the Baker House brick walls. We arranged for the front desk to call us when Jerry walking in returning from break. It was tons of fun to see the puzzled look on his face as he ran his finger along the wall trying to see where his missing entrance to his room was. He finally went back down to the front desk to complain that his room was "gone".

Ha! Snow is always fun. I like that they flipped the hack on the press. Sometimes the press can be a little too powerful and it feels like they have total control over what is distributed, so it's good to see someone get one back on them!

It was Mpemba effect.In some circumstances hot water freezes faster then cold water. They've just switched off heating and opened all widows in lockers room for a while, allowed shower room to cool down during "freezing cold temperature night". Then they've switched on hot water coming through sprinkler of shower. That created snow! Best regards, Al