Last week, Carlo Salmini MBA ’11 was skiing in the Dolomites and testing a new pair of goggles—the same goggles that his company Shred released just in time for the 2018 Olympic Winter Games. The goggles will be worn by more than 60 Olympians in PyeongChang, including Salmini’s co-founder—five-time world champion and defending Olympic gold medalist Ted Ligety. [Carlo Salmini, pictured above. Credit: Luca Crivelli.]

“I hope we’ll see the results of our research and innovation at the Olympics and that we can help them bring home some medals,” says Salmini. “When you see one of your athletes succeed, you feel part of that.” 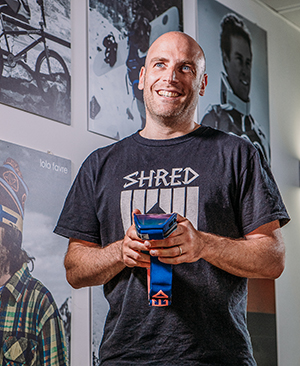 The company started around the time of Ligety’s first gold medal in the 2006 Olympic Winter Games. The two connected through mutual friends when Salmini, a materials engineer and amateur ski racer, began making body protection for his friends that were racing on the Italian national team. The pair began testing and tinkering with Salmini’s products to improve the designs and after Ligety won the gold wearing the shin guards Salmini built with his own hands, they decided to make an official partnership.

“Ligety had this idea about a company at the intersection of performance, innovation, technology, and style that did not exist at that point,” says Salmini. “We started building molds and building the concept of the brand—focused on making the best products for ourselves, our friends, and our families and having no clue about the whole business and marketing side of things.”

Enter Sloan. In addition to the business background and education he gained at Sloan, Salmini formed strong friendships that have been instrumental to the success of the business—in particular Francesco Baldisserri MBA '11. Baldisserri joined the company in June 2016 as COO and CFO. "With a background in IT engineering, and strategy and operations consulting, he brings the structured approach we were missing," says Salmini, "as Ted and myself have instead a special focus on creative innovation and technology."

The MIT alumni network has been extremely important in helping Salmini refine the strategy of the company's renewed direct-to-consumer approach, he says, as they forge a unique path in business. The company has opted out of the typical industry trade shows and network of sales reps, devoting its energy towards consumers and the performance and innovation that define its products.

Most important, says Salmini, is their product-driven focus. From the beginning, Shred’s approach to goggles has been around improving functionality with their technology, which is mathematically optimized to allow for the greatest field of view. “It’s a functional design approach,” says Salmini. “We simulate the eye position and the way the eyes scan side-to-side, up-and-down, and in-between to make sure that the frame for a given size doesn’t obscure the vision.”

The newest line of goggles also incorporates research performed by MIT students in the MIT Sports Lab. The students were tasked with tackling flat light—a nagging issue that impedes a skier or snowboarder's vision in the absence of direct sunlight. “Not being able to see the bumps in the terrain on an overcast day doesn’t allow you to perform the way you could,” says Salmini. “You have athletes winning competitions in ski races for example by two hundredths of a second—and [flat light] can account for a four to five second difference. So this could be huge. And for recreational skiers and snowboarders, this is the difference between having fun or getting injured.”

Shred will continue to improve upon the design, but thanks to the MIT students, the latest lenses incorporate a contrast boosting technology that can effectively help mitigate the effects of flat light. “Think about noise canceling headphones,” says Salmini. “You’re trying to eliminate noise so that you can hear better what it is that you want to hear. Same thing with vision. We’re enhancing the vision by reducing the noise of what we don’t want to see.”

In addition to goggles, Shred has patented, performance-focused designs for helmets, sunglasses, and body protection.

With an emphasis on safety and comfort, Shred offers products for skiing, snowboarding, and mountain biking.

For Salmini, his job is a dream come true—he’s taken his love of engineering and ingenuity and merged it with his passion for action sports and the outdoors. “This is everything to me, says Salmini. “I love skiing, mountain biking, and anything that gets me outside. Shred enables me to put together my passion and my career in a way that is different and unique—and it’s extremely challenging but also fun.”