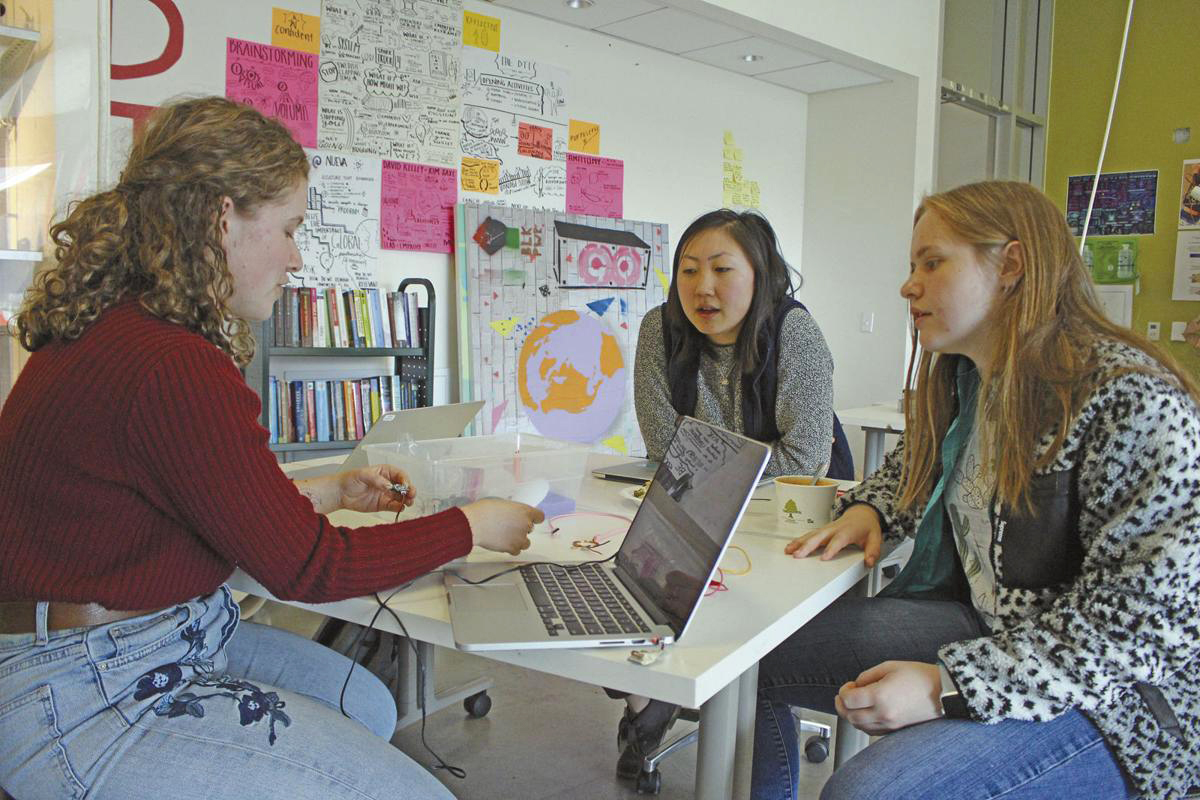 When Connie Liu ’16 took MIT class 2.009, she had an epiphany: so much of her education up to that point seemed to be about finding the solutions to problems that already had been largely solved, rather than trying to tackle problems we don’t yet have a solution for.

“Mechanical engineering showed me what learning could be like,” says Liu, who chose Course 2 with the hopes of developing devices that could improve people’s lives. “I decided I wanted to go into education and help make learning more focused on solving real-world problems.”

After graduation, Liu (pictured above center) taught at the Nueva School, a private high school in San Mateo, California, that emphasizes hands-on learning, where she spent much of her time in its innovation lab. Liu realized that these valuable maker spaces and hands-on lab experiences need to be more accessible to students everywhere. To help spread this idea, she started Project Invent, a nonprofit organization to empower high school students all over the United States to go out into their communities and invent technologies that make a difference.

Project Invent’s model is predicated on a team of students with a mentor—a teacher, local community member (an MIT alum for instance, Liu suggests), or even a mature upper-level student—teaming up with a local partner to help solve a problem in the community. Prior to working with students, the mentors are trained in four-day sessions each summer at the program’s headquarters in Menlo Park, California. Currently, 12 teams from eight different states are participating in the program, which runs October–May and ends with the students coming to Silicon Valley and pitching their concept and a basic working prototype to a group of investors and tech leaders.

One of the big focuses, says Liu, is making this program diverse and accessible, especially to underrepresented minorities that may not otherwise have exposure to such programs. “Four of the teams this year are all female, and one is a team of all teenage mothers,” says Liu. “They’re designing for the problem of insomnia and sleep deprivation for mothers—they’re interviewing peers who have given birth and researching what challenges they face and then designing a technology to address that.”

Past teams have proven the model to be successful, including Stria, a team from last year’s cohort that developed a belt for the blind to help prevent dangerous veering, an inability to maintain a straight path. Stria went on to win national competitions, securing around $4,000 in funding, and is continuing development of its product.

Liu says the positioning of the program—of engineering as a way you can make a social impact—is helping it reach a lot of engineering beginners, because most students haven’t heard that pitch before. “We’re getting a lot of different kids than those who are, for example, applying for robotics teams, and we’ve been having so much success reaching underrepresented minorities because they see it as an opportunity to help their community.”

Watching the program grow is very rewarding for Liu, who hopes to expand more and more each year, by keeping current schools engaged and starting new teams annually. But for her, that’s just the beginning.

“I would love Project Invent in all schools, but the main vision is really about how to redesign high schools to be places where students are empowered and show them that they can make a difference,” she says.  “Education doesn’t have to be all about bubbling in answers. There are ways we can design it to actually be preparing our students for the future of work, to show them that they are able to create a unique impact on the world.”