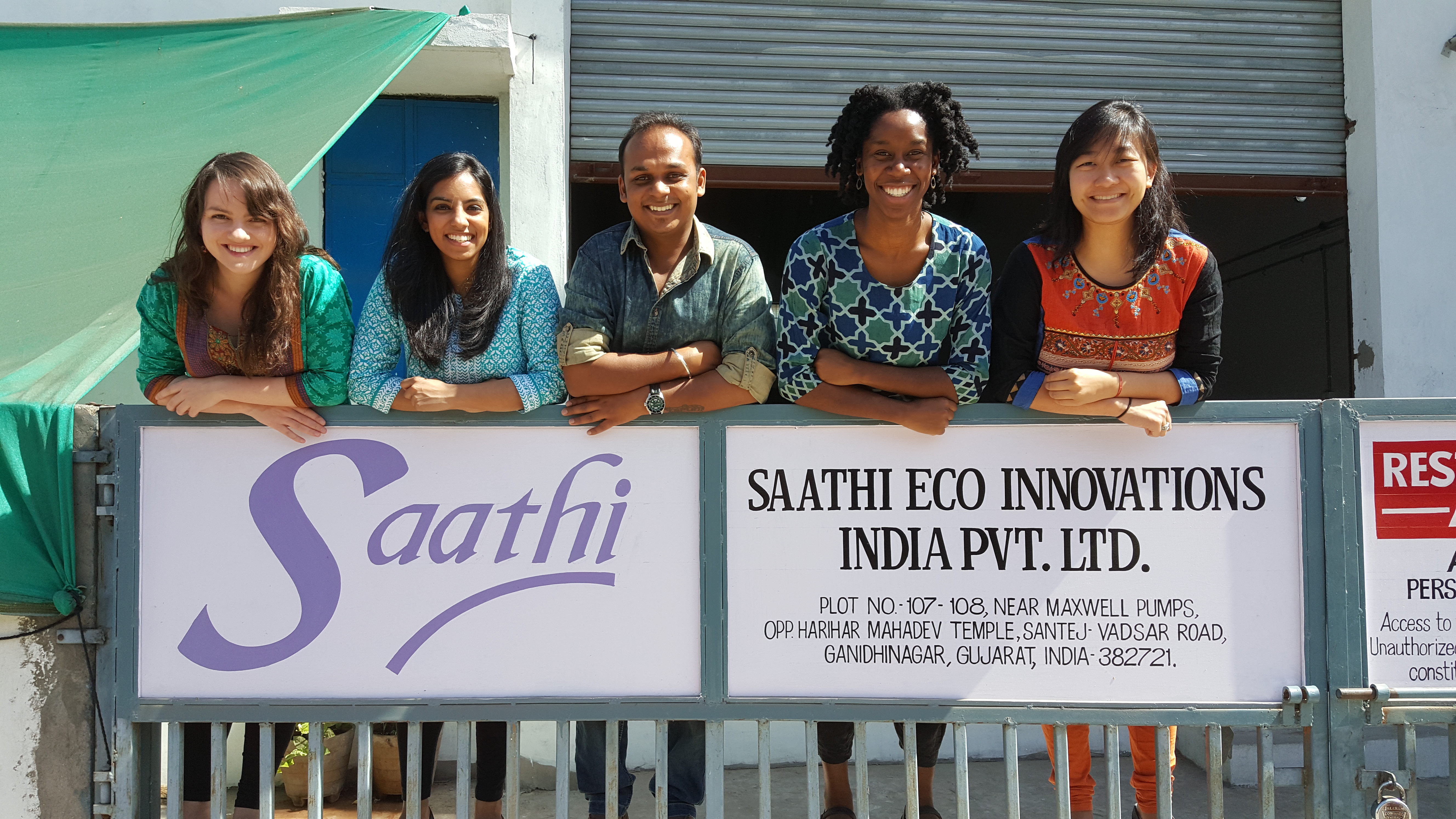 Just 16 percent of women in India have access to sanitary pads—a fact that often forces them to remain at home when they have their period, missing school and work. Women without access to sanitary pads devise their own solutions like using cloth, which can be unsanitary when not washed and dried properly. If you ask Amrita Saigal ‘10 why she cofounded Saathi, an eco-friendly sanitary pad company, these are the facts and stories she runs through. These are the facts she wants to change.

Saathi’s story starts at MIT with 2.009, Product Engineering Processes. In the popular course, students design and build prototypes unified around a common theme like adventure, outdoors, or even food.  For Saigal’s semester, the theme was emergency—and she had just the idea. “My team went out on a limb to say that not having a sanitary pad was an emergency,” Saigal says. To address this emergency, Saigal’s team prototyped a small machine that could manufacture sanitary pads from waste banana fiber—the product that’s left after harvesting bananas. With the modular manufacturing machine, women in rural areas could make their own pads, combating the lack of access to sanitary products.

Launched in 2015 by Grace Kane ‘11, Kristin Kagetsu ‘12, Tarun Bothra, and Saigal with Sarah McMillian '15 joining to help business development,  Saathi has had many iterations since the 2.009 prototype. “We learned to fail fast and fail early,” Saigal says. With support from D-Lab Scale-Ups and MIT IDEAS Global Challenge, and guidance from professors David Wallace SM '91, PhD '95 and Maria Yang '91, the team was able to test ideas and manufacturing systems. They soon learned it would be difficult and costly to run a decentralized manufacturing mission and focus on quality—so it was time to pivot. “We thought awareness, affordability, and access were the biggest issues,” Saigal says. “But we found out that waste was a big issue and no one was addressing it.”

With other companies beginning to enter the market in India to make pads more accessible, Saathi decided to tackle the waste problem as their leading issue. To do this, the company centralized their manufacturing—employing local women in Ahmedabad—and made the pads sustainable and completely biodegradable by using bioplastics in place of the polyethylene they were previously using for the outer layers of the pad.  Now Saathi’s pads completely breakdown in six months.

Though the pads were originally developed to meet the needs of rural markets in India, the team learned that many consumers desired environmentally-friendly feminine products. “We found that people were willing to pay a little more for the pads in urban areas, which helps reduce urban waste, and subsidize the pad cost for rural areas,” Saigal explains. To help meet the goal of making pads more accessible, Saathi also partnered with Ekal Vidyalaya & Arogya Foundation of India to launch the #OneMillionPads Program, to distribute pads to the women of rural Jharkhand, India in addition to the pads women can get through other NGOs in rural areas.

Saathi officially launched their pads in the rural and urban Indian markets this spring, but Saigal says they are already thinking of future markets. “We want to be the leading ecofriendly sanitary pad in India,” Saigal says. “But, it’s a huge problem in many developing countries as well—and in the US we can use ecofriendly products too.”