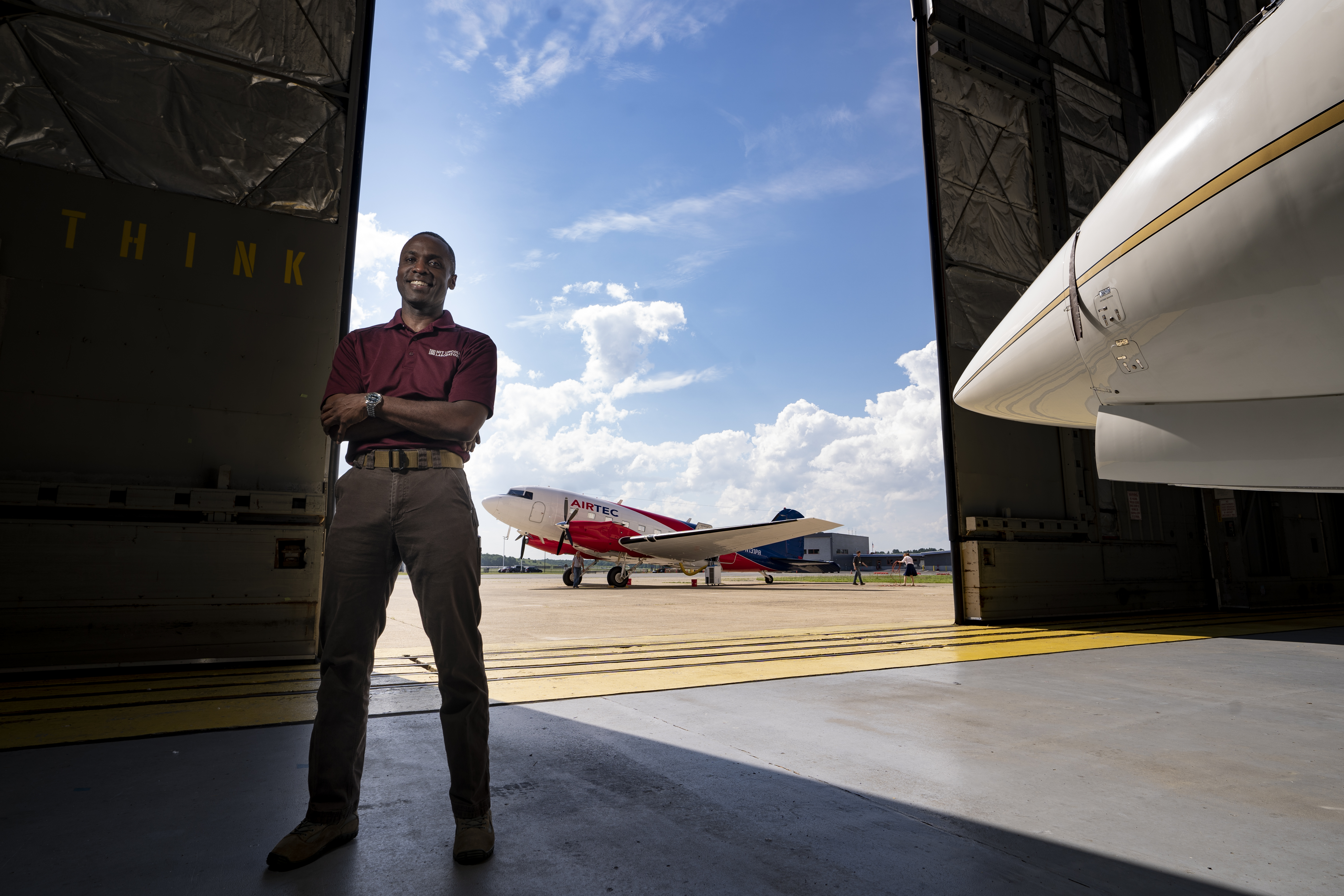 MIT has certainly graduated its share of pilots and astronauts, but it’s not really a place one would expect to find active test pilots at work flying planes.

According to Washington, Lincoln Lab has several divisions that develop new communications and radar equipment, imaging sensors, tracking, collision avoidance, and other sophisticated aviation tools. “Some of those experiments or programs require airborne experiments,” he explains. “They need to take their radar in flight against certain targets or drive their sensor over certain land masses or types of vegetation.” That’s where the Bedford facility comes in. As an MIT-trained aeronautical engineer as well as an experienced test pilot, Washington consults with research groups—many of whom are new to flight testing—to better design their experiments. He and his fellow flight test staff members help experimenters “pick the right platform and profiles that they’re going to fly, understand what we can do and can’t do, and get the best data collection events that they can get.”

It’s the perfect job for Washington, who had his private pilot’s license before his driver’s license. But while many aviation-obsessed kids are content just to dream of flying airplanes, Washington’s goals were more specific. “Sure, I could have gone and flown for the airlines, but that has no interest for me,” he says. His passion for flight and a strong technical inclination led him to MIT.

Taking to heart his father’s counsel that “if you’re going to learn something from somebody, then you want to learn from the best that you can,” he mapped out a methodical plan. “I wanted to do this flight test thing. I figured in order to do that, I have to have two things: some sort of engineering degree, and experience flying airplanes. So OK, where do I need to go to get the best technical education and the best flying experience? That’s where MIT and the air force came together.”

"If you’re going to learn something from somebody, then you want to learn from the best that you can."

Washington applied to MIT and several other colleges; the Institute was the first to say yes. He went on to complete undergraduate and graduate degrees in Course 16. While at grad school, he interned with Aurora Flight Sciences, a company founded by John S. Langford ’79, SM ’83, SM ’85, PhD ’87 that specializes in autonomy and robotics for advanced aircraft.

Having achieved a top-tier technical education, Washington moved on to deepening his flying experience, joining the military and attending US Air Force Test Pilot School. Eleven years in the air force brought him to the point where he either had to retire or move up to higher levels that would involve less time in the cockpit. So he left the USAF and joined Aurora formally, this time as a test pilot at its Virginia headquarters. After 10 years there, a new job at Lincoln Lab gave him the chance to return to MIT—and still keep flying.

Washington notes that his methodical approach to achieving his life goals seemed a perfect fit for the Institute. Considering his student days, he observes, “The people who were successful there, no matter what their ability or background or skill set, essentially had a goal. Everybody had something internally that was driving them.” As a member of Lincoln Employees’ African American Network (LEAN), Washington also strives to impart such values to the next generation, hosting tours of the flight test facility and its work for students from groups underrepresented in STEM fields. It’s another legacy of his time at MIT. He remembers that all the faculty and staff he encountered were “incredibly supportive of the students. People were there to help you if you needed or wanted the help.”

He adds, “That’s probably 90 percent of the battle. As long as you’re focused and you’re willing to put in the work to get to that goal, you’re pretty much there.”