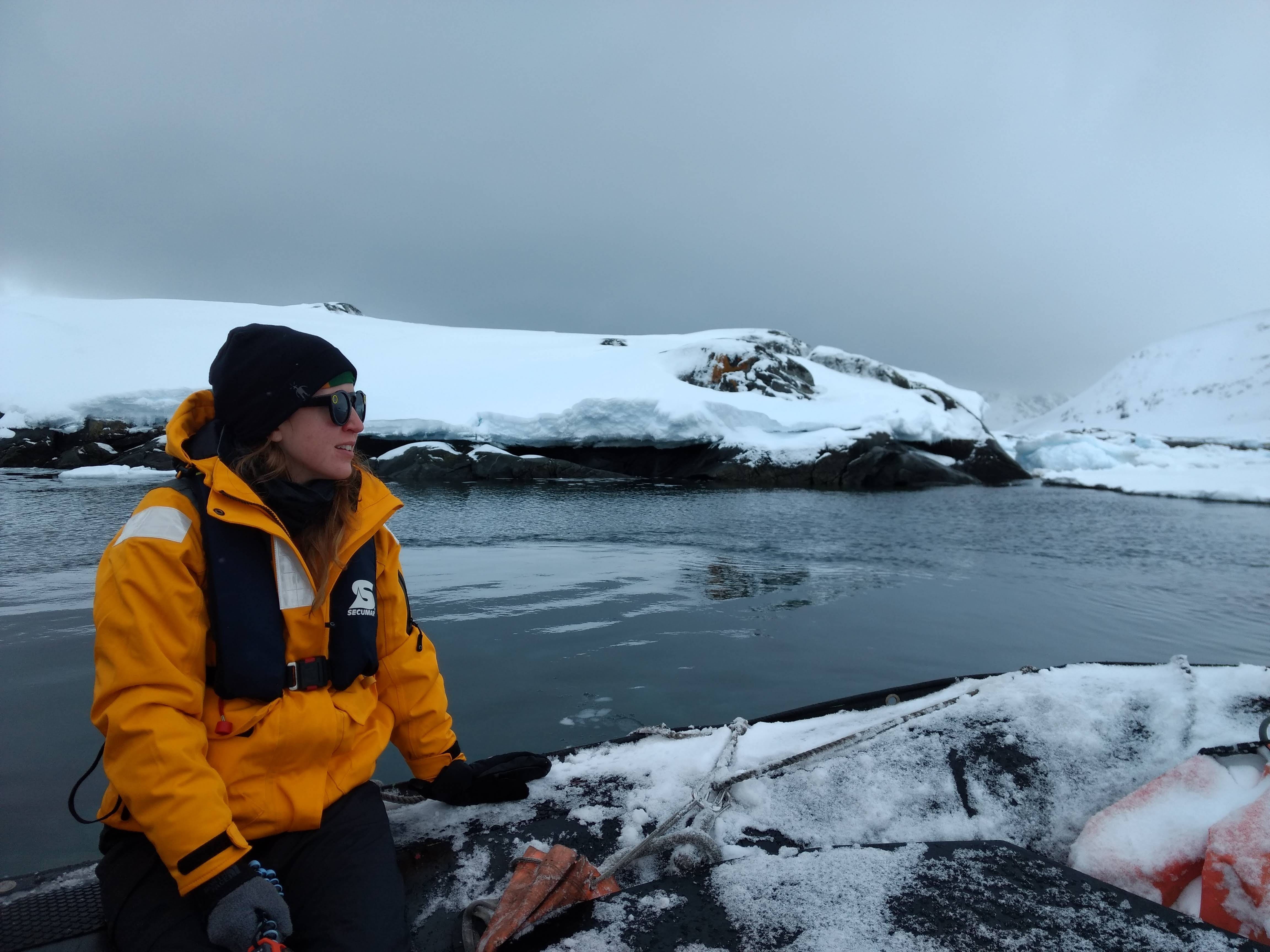 Emily Moberg ’11, PhD ’16 isn’t exactly sure when her love of the environment started. Perhaps it was during the early years she spent in Florida, chasing lizards with such tenacity that her parents were afraid she would accidentally catch a baby alligator. Or maybe it was later when she took part in a national high school science competition called Envirothon, working on environmental problems in aquatic ecology. Regardless, when Moberg first came across the term “environmental engineering” while applying to college, she knew it was something she wanted to pursue. “I thought, that’s the field for me—it involves the environment, it involves working on solutions, and it involves trying to make the world a better place,” Moberg says. Now, as a researcher at the World Wildlife Fund (WWF), Moberg’s work combines these elements daily as she tackles large-scale climate change issues within the context of agriculture.

At WWF, Moberg’s research for the past two years has centered on how to make protein production more sustainable. To address this challenge, Moberg assembled a team of international experts, breaking down barriers between terrestrial farming, livestock farming, and aquaculture while integrating research on environmental impacts, nutrition, and livelihoods. “There tend to be internal silos in how we think about agriculture, but in thinking about how to move toward a more sustainable future, we need to understand how trade-offs occur across systems and across different dimensions.” Moberg explains. “We want to understand what the current landscape looks like with respect to different production systems and geographies, and what the problems and opportunities are moving forward.”

There tend to be internal silos in how we think about agriculture, but in thinking about how to move toward a more sustainable future, we need to understand how trade-offs occur across systems and across different dimensions.

The group’s research has encompassed case studies in the Congo Basin, South Africa, and India—places where residents lack access to high-quality protein and are likely to be heavily impacted by climate change. The team investigated a set of solutions for better agricultural practices—including the wider adoption of well-established practices like planting cover crops to improve soil quality and farming without tilling the soil, as well as novel practices like using microorganisms to break down manure and conditioning soil with specialized charcoal called biochar. Moberg and colleagues also came up with ideas for transitioning people in Western countries to healthier, more environmentally friendly diets.

“One of the big takeaways is that there is no silver bullet for these problems of malnutrition and environmental sustainability and providing livelihoods through agriculture,” Moberg says. “There are solutions that can offer pieces of this puzzle, but it’s not going to be the same story for every country, or even every part of every country.”

Moberg’s next set of projects will focus on the carbon produced within supply chains for agricultural products—which is an important driver of climate change. Specifically, she has been tasked with helping companies track the various sources of carbon embedded within the production process for goods they purchase, and figuring out how those carbon emissions can be reduced. The projects under consideration include an investigation of carbon production on shrimp farms. Moberg will also be involved in Next California, a project led by Julia Kurnik ’06 that is exploring the feasibility of shifting production of specialty crops to the Delta region of Northern California as the climate changes.

Moberg says her appreciation for the value of scientific research grew during her MIT undergraduate years, particularly during a summer fellowship studying phytoplankton dynamics with Heidi Sosik ’87, SM ’88 at the Woods Hole Oceanographic Institute (WHOI). Moberg recalls asking Sosik why some of their photosynthesis measurements didn’t make sense. “Her answer was, that’s a thing that we don’t know yet as a scientific community,” Moberg says. “My mind was blown, and I thought, I have to do research—there’s still so much fundamental knowledge that we don’t have.”

Moberg’s realization sent her to the MIT-WHOI joint program, where she earned a PhD in biological oceanography while working on models of fisheries and climate change. “MIT was a really great fit for me in terms of an experimental, build-things, do-things culture,” she says. And by the end of a joint postdoctoral position at Rutgers and Yale, the latent engineer in her was resurfacing. “At that point I was thinking, I’m learning a lot, I’m doing a lot, but I don’t feel like I’m necessarily getting to change things myself,” Moberg explains. This realization spurred her into the nonprofit sector, where “there’s a really great marriage between doing science and using science.”

These days, Moberg’s investment in the environment doesn’t stop with her work at WWF—she is also the executive chair of the National Network for Ocean and Climate Change Interpretation (NNOCCI). “Our goal is to change the national conversation around climate change,” Moberg says, something that the organization is doing by helping climate scientists communicate their research to zoo and aquarium educators, and supporting those educators as they share climate science with broad audiences. In January, Moberg gave a talk about NNOCCI to an MIT alumni group called the Energy, Environment, and Sustainability Network (see below), offering tips on how to have constructive conversations about climate change—for example, starting with a shared value, using clear metaphors, and ending with a solution.

While Moberg routinely takes on highly complex problems in her research and communication efforts, her motivation for devoting her career to environmental issues is simple: “We’re a big team on this planet, and it’s important for me to feel like I’m contributing to that team effort of making sure that we are taking care of each other and our planet.”