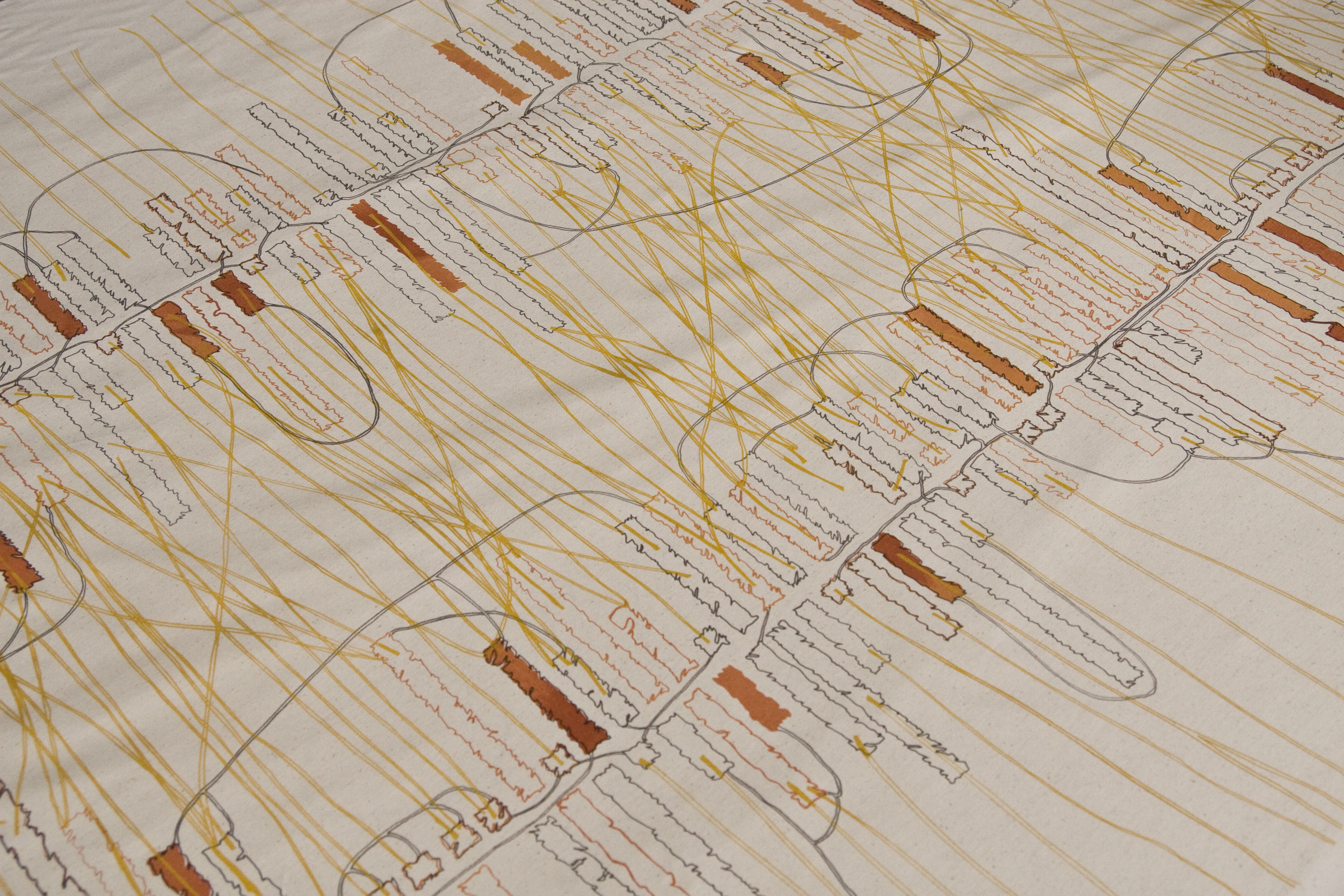 Artist’s books can offer intimacy—one or two people may page through the book—but also broad aesthetic appeal. In the two art books that Sarah Hulsey PhD ’08 presented at an IAP session January 25, the subject works the magic between the nature of language and visual images. [An example, picture above, is Condensed OED, which is printed on more than 20 yards of fabric and  represents connections between words in the Oxford English Dictionary.]

Hulsey’s books, among more than 100 artist’s books in the MIT Libraries collection, illustrate her continued exploration of linguistics—her field of study as a doctoral student at MIT.

“Language is a fascinating system with many detailed and intricate rules about how things can combine and integrate into structures. Sounds combine into syllables, syllables into words, words into phrases, phrases into sentences, and sentences into discourse, each according to the rules of the particular language.”

As she was studying and later teaching linguistics, she felt drawn to making ideas about language available outside the scholarly community in a visual form. Her natural tool was printmaking and letterpress and, these days, her work usually takes the form of installations or art books.

In Di.a.graph.i.a, Hulsey began with a visual image—Copernicus’s diagram of the solar system first published in 1543. “I took a text that was associated with a particular diagram and used the visual strategies of the original, so my piece looks something like the source image but rather than representing the solar system, it represents a text about the solar system.”

Another of Hulsey’s art books in the MIT collection is Asterisms, a word that refers to the shapes people have used to describe and remember constellations. Her art book includes 10 different pairs of maps—one for consonants, one for vowels—for the 10 most commonly spoken languages. She used the layout of the International Phonetic Alphabet (IPA) chart to represent the sounds in each language and map them to indicate which sounds predominate. “Asterisms functions both as an accurate record of the distribution of sounds in these ten languages and also as a purely visual art object.”

Hulsey began studying linguistics and making art as an undergraduate at Harvard. The opportunity to work in the Study Room for Prints, Drawings, and Photographs at the Fogg Art Museum plus two years of letterpress instruction at the Bow & Arrow Press awakened her interest in printmaking. In 2013, she earned an MFA in book arts and printmaking at the University of the Arts in Philadelphia.

“The subject matter of my work is language,” she says. “I realized over time that my interest in linguistics was less scholarly and more about how to convey the ways that language works in general to a wider audience. I had been teaching linguistics at Northeastern University for several years and then I moved into book arts. My work is still very much about linguistics, but through the lens of art.”

See more of Hulsey’s work at her website. Her recent article, “Visual Reconstructions of Language,” published in Openings: Studies in Book Art, shares her approach to art making and linguistics.

Alumni are invited to make an appointment to see and hold examples of the artist’s books in the Limited Access Collection at Rotch Library.