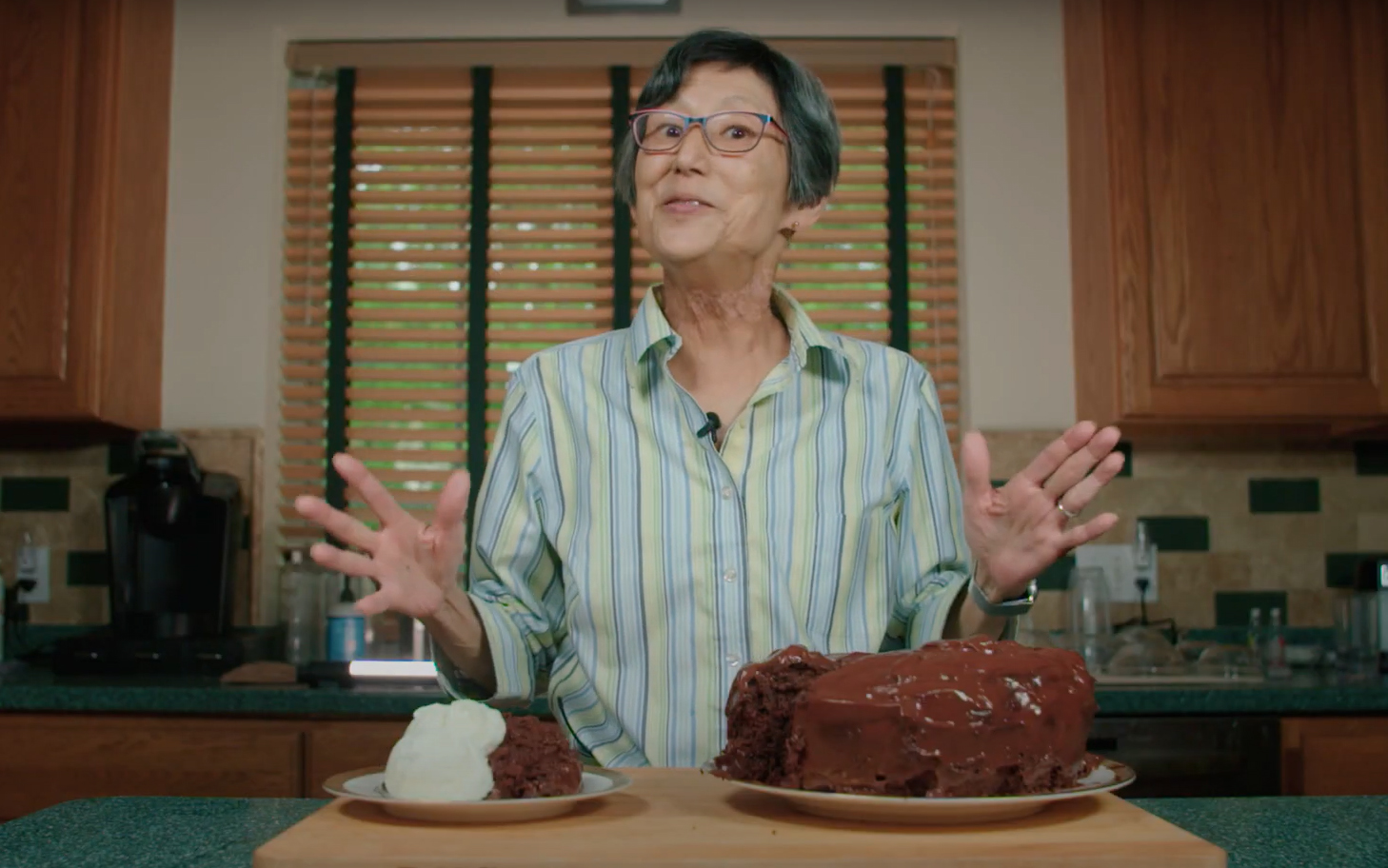 Lynn Yamada Davis ’77 says she was never much of a chef, so she was in disbelief when the unconventional cooking videos she and her son started making last spring racked up millions of views.

Davis recorded the initial video in March with the youngest of her four kids, Tim, age 25. “I was trying to preserve my father’s sukiyaki recipe because the kids loved it so much, just like I loved it as a kid,” she says. “Tim had all this equipment because he was doing freelance videography.” Extra time at home due to the pandemic provided them with the perfect opportunity to shoot the video, followed by a few more.

Cooking with Lynja started on YouTube with a slow following at first—mostly family and friends. Then they gradually added their videos to TikTok and Instagram as well. Things started to change when her 29-second breakfast sandwich tutorial, aired on July 4th weekend, went viral on TikTok. “Tim called me and said, ‘Mom, we have 300,000 views.’ I thought he was really joking with me. I really did, because why would anybody watch a bacon, egg, and cheese video?”

Now with more than 100 videos under her belt, Davis says her rule of thumb is “the simpler, the better.” Ramen with peanut butter and sriracha, Philly cheesesteak, and sugar cookies are among her most popular recipes. Her easy recipes, distinctive raspy voice, and quirky sense of humor have earned her more than 4 million subscribers between TikTok, YouTube, and Instagram. No one is more surprised about the social media stardom than Davis—but it is the unexpected that makes her appealing to fans, she thinks. “I’m the grandma who makes fun of herself, is funny, and knows pop culture—and I hope makes cooking fun for them.”

I want people to know it’s OK to make mistakes also, because you don’t learn unless you try things.

In the beginning, the videos were intricate and highly produced reels that resembled more traditional cooking videos, but soon Davis and her son started having more fun with the production, which fans seemed to love—including dressing up in costumes and creating a “little Lynja” using a green screen. “We also started adding in some mistakes,” recalls Davis. “I think it was one of the smoothie recipes where I threw a banana and knocked the glass over. Tim put that in, and that made that video very popular. I want people to know it’s OK to make mistakes also, because you don’t learn unless you try things.”

Making cooking more accessible to people is important to Davis, who explains that she really didn’t experiment in the kitchen until retiring in 2016. At MIT, she lived in McCormick Hall, where Davis says many social gatherings took place in the large “party kitchen,” but her culinary repertoire at the time was limited to basic ramen and scrambled eggs. Graduating with a degree in civil engineering, she spent the beginning of her career working for the federal government, helping to make federal buildings accessible, before earning her MBA and MPH at Columbia. Her first job at AT&T Labs doing systems engineering for a medical record system led to a 29-year career there that wrapped up with a position as a project manager for software projects.

The most rewarding part about Cooking with Lynja, says Davis, has been the experience of doing it as a family. In addition to Tim—who films, edits, and produces the footage—her husband and other kids, along with their significant others, pitch in on production, communications, and recipe development.

“The pandemic’s been horrible in so many ways for so many people in this country, in the world,” she says, “but I feel very blessed that we’ve done OK. Cooking with Lynja has really brought my family together.”