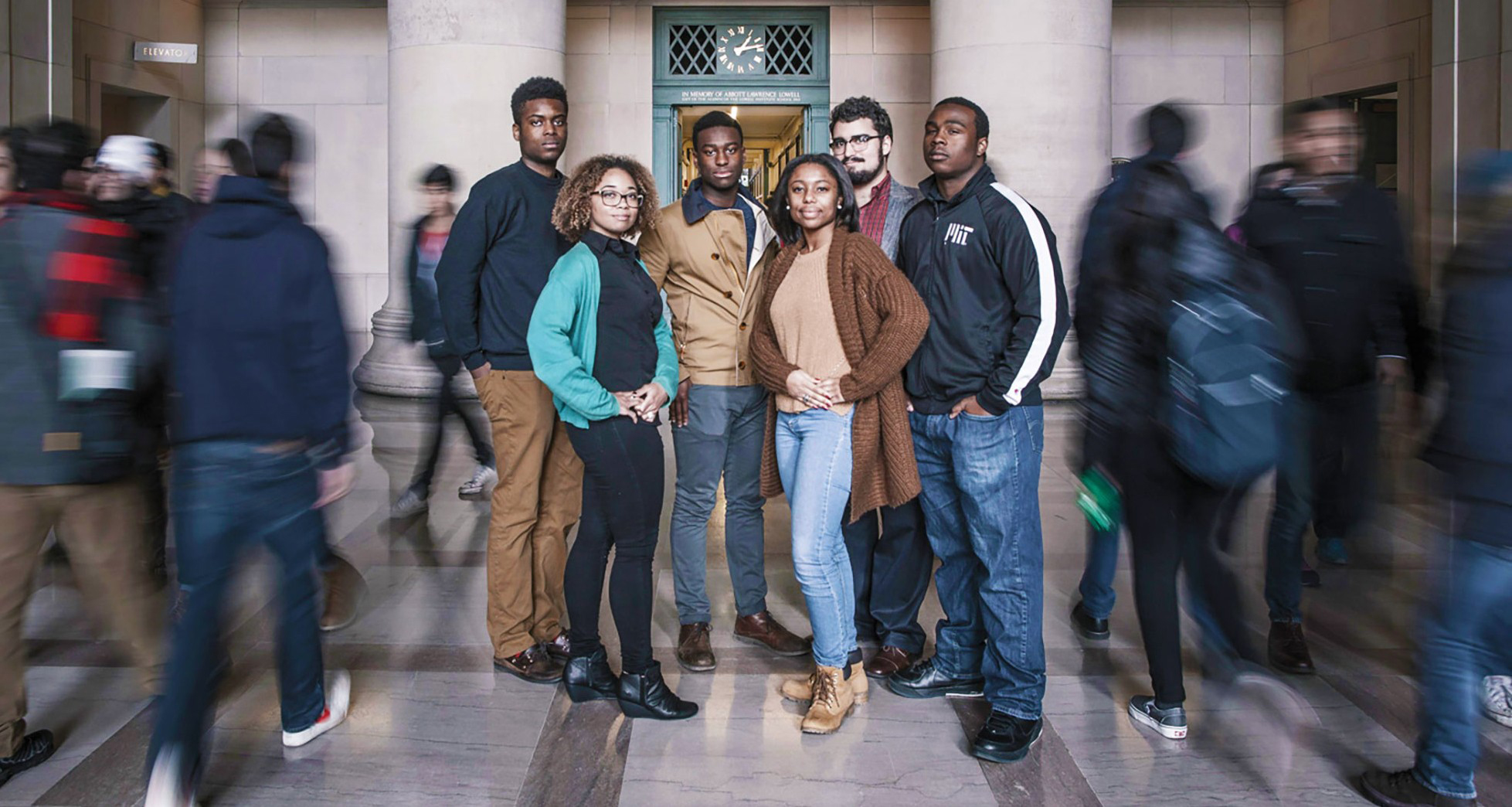 The BAMIT Capstone event, The Road to 50: The Power of Community, November 2–4 on MIT’s campus, celebrates the 50th anniversary of the MIT Black Student Union at MIT.

In 1968, the black student community at MIT was small and needed a way to amplify its voice. Formed during that tumultuous year in political and racial history in the US, the MIT Black Students’ Union (BSU) launched a journey of advocacy and community that now continues 50 years later.

In the late 1960s, about 11 percent of Americans were black, but each 1,000-member class at MIT had perhaps half a dozen black students. Galvanized by the assassination of Martin Luther King Jr., black student groups were forming at overwhelmingly white college campuses across the country, and MIT was no exception. The students who started MIT BSU had two goals in mind: to support each other and to bring more black students to the Institute. “Surely there were more than three blacks in the high school class of 1965 who could belong to the MIT tribe,” says Linda C. Sharpe ’69, one of the BSU founders, who is a past president of the MIT Alumni Association and a former MIT Corporation member.

In fall of 1968, the new group drew up and presented a list of recommendations to the MIT administration: increasing the number of black students, creating a pre-­enrollment summer program for minority students, and hiring more minority faculty members. In response, MIT established the Task Force on Educational Opportunity (TFEO), which was made up of a group of BSU representatives and MIT administrators and chaired by associate provost (and future MIT president) Paul Gray ’54, SM ’55, ScD ’60. Through a series of often intense discussions, the TFEO designed the summer program, called Project Interphase, and came up with more inclusive approaches to things like recruitment, admissions, and financial aid.

Stories and voices from the MIT community

“The Institute rolled up its sleeves and attacked [the recommendations] in the MIT way—that is, being very analytical about what the challenges and problems were, and then trying to figure out solutions to those challenges,” says founding BSU cochair Shirley Ann Jackson ’68, PhD ’73, who went on to become the first black woman to earn a PhD from MIT and is now the president of Rensselaer Polytechnic Institute and a life member of the MIT Corporation. “That doesn’t mean there wasn’t great emotion around it, because there really, really was on all sides.”

Other key players in the birth of the BSU were founding cochair James Turner, PhD ’71, Jennifer Rudd ’68, Charles Kidwell ’69, Nathan Seely ’70, Sekazi Mtingwa ’71, Fred Johnson ’72, and Ronald Mickens, who was a postdoctoral associate in physics.

Gray, who died in 2017, would ultimately recall that being part of the Task Force was eye-opening: “I came away with an understanding I had none of two years before, as best a white person can understand what it was like to be black in the United States in the era before and during the civil rights revolution. It was a powerful experience.”

Through the efforts of the Admissions Office and BSU members who began recruiting black applicants from all over the country, the number of African-American students jumped to about 50 in the Class of 1973 and continued to rise, as did the numbers of women and other members of underrepresented minorities. Meanwhile, in an event modeled after political takeovers of buildings on other college campuses, a group of black students disrupted a meeting of the MIT Corporation in 1970 to advocate for the BSU demands and support kitchen workers involved in a labor dispute.

“Diversity is but a stepping-stone toward a higher goal. Inclusion—truly valuing the people brought to this campus in all of the identities they bring—is where we must look.”

“The BSU has always played a major role in helping the Institute to not fall back from the goals of commitment and participation of black students, faculty, and administration. It’s been a key agent in helping MIT look at itself,” says adjunct professor emeritus of urban studies Clarence Williams, HM ’09, who joined the MIT administration in 1972 as assistant dean of the graduate school and has since served in multiple positions, including as acting director of the Office of Minority Education, special assistant to the president and chancellor, and Institute ombudsperson. Williams, who started the Black History Project in 1995, is the author of Technology and the Dream: Reflections on the Black Experience at MIT, 1941–1999 (MIT Press, 2001) and co-produced the 1996 video “It’s Intuitively Obvious,” which documented the experience of black students at MIT.

In addition to working to increase the number of black students on campus, the BSU advocated for recruitment and retention of black faculty and staff. “We also sought to broaden the dialogue on campus around issues pertinent to our community,” says Michelle Harton ’83, the outgoing chair of Black Alumni of MIT (BAMIT). Over the years, the BSU has organized discussion panels and cultural events, hosted prospective minority students, and played a central role in MIT’s annual Black History Month observance. Among the speakers brought to campus by the BSU are Benjamin L. Hooks, then executive director of the NAACP, and Ivan Van Sertima, author of They Came Before Columbus: The African Presence in Ancient America.

Five decades after the formation of the BSU, black students now make up 6.2 percent of MIT’s undergraduate population (as of fall 2017), up from 0.6 percent in 1968. And Sharpe notes that today, “the number of black women in the freshman class is nearly equal to the number of all women in my class.” She adds, “Times do change, if a lot more slowly than we would like.”

And the work continues today. In a parallel to the 1968 BSU proposals, the BSU and the Black Graduate Student Association (BGSA) met with President L. Rafael Reif in 2015, following several racially charged incidents across the country. The two groups issued a set of recommendations that included diversity orientation and training for all students, a diversity representative within each department, an MIT Medical clinician specializing in psychological issues affecting African-Americans, and a requirement that all undergraduates take an “immersion studies” elective focusing on multiculturalism or diversity. BAMIT and other groups also made recommendations. Many have already been completely or partially implemented, and conversations on how to advance other recommendations on the departmental level are ongoing.

Stories and voices from the MIT community

“The work that needs to be done at MIT is similar to what needs to take place across the country—greater cultural understanding and value for the differences that people bring, plus mechanisms for civil discourse,” says Elaine Harris ’78, a BAMIT board member and cosponsor of what’s now called the Hack for Inclusion, an annual hackathon to tackle issues of bias, diversity, and inclusion. Outcomes from the hackathon include projects to create a more welcoming Boston for the black community and to address bias in machine learning. “I wish that the problem-­solving skills we apply to technical challenges and the metrics we develop to assess progress could be used in the domain of diversity, equity, and inclusion,” she says.

The BSU held an on-campus event in February to celebrate its 50-year legacy of advocating for black students and all minorities at MIT. In June, Jackson and Rudd—the first two black women to earn undergraduate degrees at MIT—became the first black women to earn their red jackets at their 50th reunion, where Jackson also served as a class speaker. In November, she is slated to speak at the BAMIT capstone event, “Road to 50: The Power of Community,” which will feature historical recollections, discussions, and a look forward.

Kelvin Green ’21, current cochair of the BSU, believes the organization is still playing an integral part to ensure equality within the MIT community, and that’s one of the reasons why he chose the Institute.

“Diversity is but a stepping-stone toward a higher goal,” he says. “Inclusion—truly valuing the people brought to this campus in all of the identities they bring—is where we must look. Let us not stop at the stepping-stone of diversity and ponder why it cannot support our weight; we must transition to the rock of inclusion, which is by definition created to support us all.”

This article originally appeared in the MIT News section of the November/December 2018 issue of MIT Technology Review magazine.