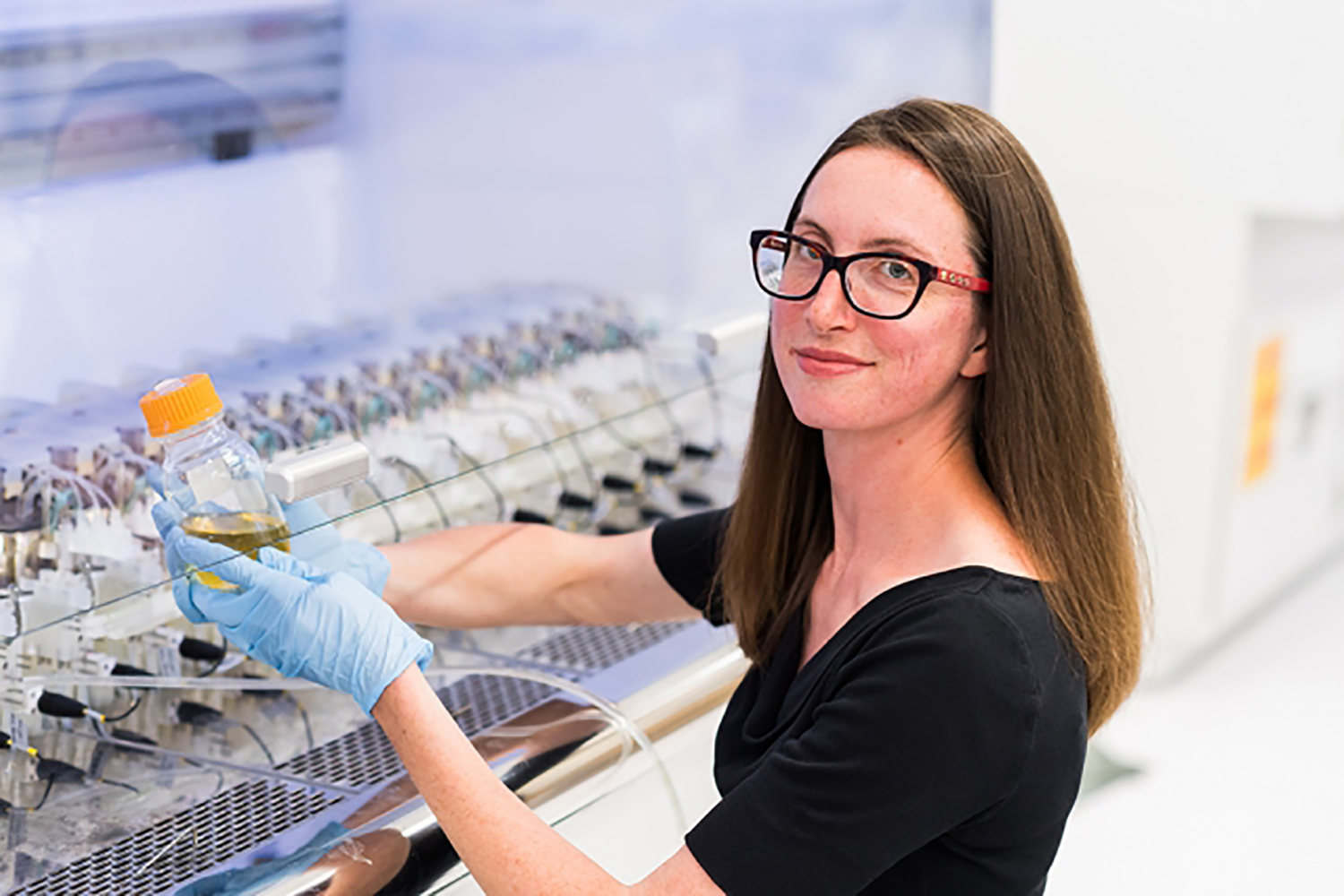 From afar, the multistory fermenters—towering metal cylinders encompassed by scaffolding, ladders, and pipes—look like rockets on a launch pad. Climbing to the top of the fermenter, visitors to the Mexico City manufacturing plant can peer down at a set of paddles churning 50,000 liters of frothy, golden broth. Within the mixture, genetically engineered yeast are synthesizing lactones—a family of molecules responsible for the aromas of fruits and flowers. MIT Department of Biology alumna Emily Havens Greenhagen ’05 has visited the plant over several weeks to monitor her company’s most promising project: a plan to make perfume from yeast cells.

Greenhagen is director of fermentation engineering at Ginkgo Bioworks, a Boston-based synthetic biology company seeking to turn microbes into customizable factories to produce products ranging from pesticides to perfumes.

Scientists such as Greenhagen know that microbes can manufacture organic products more efficiently than any machine or production line. Instead of workers at an assembly line, yeast cells use enzymes—proteins that perform a specific task such as removing or adding a group of atoms to a molecule. Working together, teams of enzymes incrementally transform basic nutrients like sugar into other compounds such as alcohol and carbon dioxide. “By inserting DNA encoding for enzymes from different plants or animals into yeast cells,” Greenhagen says, “we can tailor microbes to produce different materials.”

Manipulating yeast cells is an old idea. For hundreds of years, people have been brewing beer through fermentation, a natural process where yeast consume sugar to create alcohol and different flavorings. In the 1930s, scientists began using microbes to create antibiotics and biofuels. “What makes Ginkgo cutting edge is the automation and scale,” Greenhagen explains of the company co-founded in 2008 by synthetic biologist Tom Knight ’69, SM ’79, PhD ’83. “Using robots, we can genetically modify hundreds of yeast strains and test how they perform in just one week.”

Like Ginkgo Bioworks, Greenhagen embodies the convergence of biology and engineering. As a freshman at MIT, Greenhagen had decided to pursue chemical engineering but changed her plans when she learned about synthetic biology. “I couldn’t stop reading my textbook,” she recalls. “I was so excited by the idea that there are living organisms that we can modify to use as tools. That’s when I decided to become a scientist.”

Greenhagen credits one particular microbiology course, taught by Professor Graham Walker, for shaping her thinking as a biologist. While lecturing on organelles, Walker encouraged students to imagine the room as a cell and to point out where the nucleus or mitochondria might be located. “His teaching style inspired me to really visualize what’s going on in the fermentation vessel,” Greenhagen says. “Whereas fermentation engineers worry more about physical variables like oxygen transfer and think of organisms as black boxes, my training at MIT gave me an empathy for microbes. It’s an approach that a lot of chemical engineers don’t necessarily think about and has been key to my success.”

By harnessing biology and engineering, Greenhagen and others in the field of synthetic biology are beginning to transform manufacturing. Many consumer goods, from food to clothes to perfume, are produced using traditional ingredients and industrial processes that are increasingly unsustainable as planetary resources dwindle. By using microbes, companies can generate many of the raw resources they require with less energy and waste than factories.

This excerpt was first published on the MIT News website in July; for more details, read the full post.