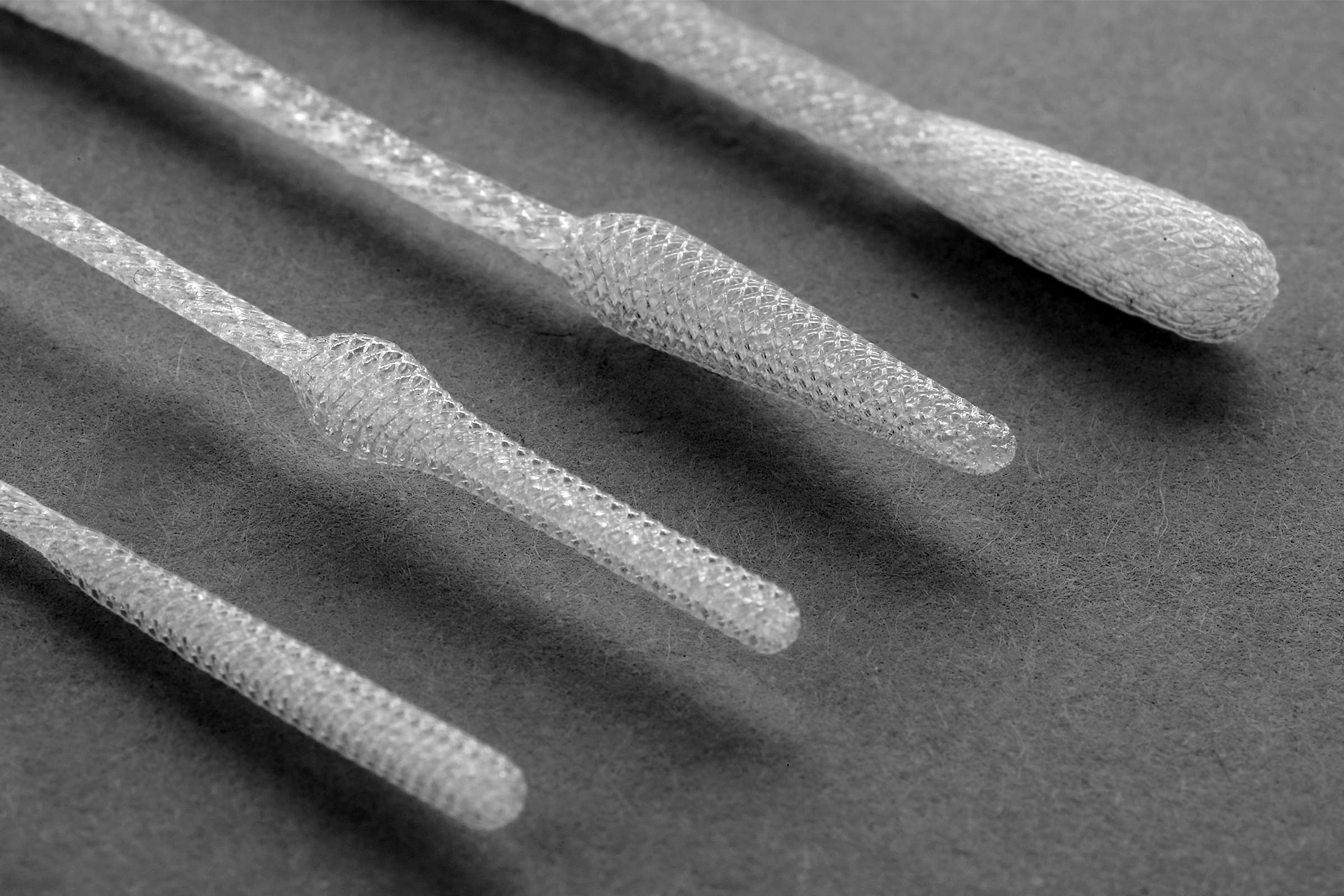 Over nearly seven years researching 3D printing systems in MIT’s Media Lab, Jifei Ou SM ’14, PhD ’19 began to suspect the work could lead to better products. He never could have imagined it would help address supply shortages caused by a global pandemic.

Since March of last year, Ou’s company, OPT Industries, has been working with hospitals to deliver a new type of nasal swab for Covid-19 testing. The swabs make use of thin, hairlike structures Ou developed while at MIT. Tiny woven lattices within OPT’s swabs allow them to absorb and release more fluid than conventional swabs.

The MIT spinout uses a continuous manufacturing approach that allows it to scale up printer production with demand. To date, it has supplied over 800,000 swabs to a number of health care and at-home testing organizations, helping to meet a shortage that had threatened hospitals’ testing capacity.

In the 12 months since Ou realized OPT could play a role in the pandemic response, the company’s small team has multiplied its manufacturing and distribution capabilities, partnered with large health care organizations like Kaiser Permanente, and begun developing other products that could benefit from the company’s design process.

“It’s very meaningful to be part of this effort,” Ou says. “It also feels particularly good because we’ve been developing materials with hairlike structures for a long time, so it’s like, ‘Aha, our expertise finally put to use!’”

An innovation leaves the lab

Ou’s time as a research assistant in the Media Lab’s Tangible Media Group culminated in a PhD for which he created new ways to design and 3D print intricate microstructures. The work required his team to build its own 3D printer, create design software, and develop special polymers to meet high durability and resolution requirements.

In March last year, as hospitals around the country began running out of the nasal swabs needed to test for Covid-19, Ramy Arnaout ’97, a director at Beth Israel's clinical microbiology laboratories and an associate professor at Harvard Medical School, sent an email to his network at MIT and beyond looking for help.

The following day, Ou walked into Arnaout’s office at Beth Israel with a prototype nasal swab his team had put together overnight. The visit was notable not only for the quick turnaround, but also for the precision with which the prototype was made.

OPT’s products are designed using algorithms that attempt to optimize each fiber placement. The company’s swabs feature porous microstructures within their heads that are tuned to collect and retain fluid, then quickly release that fluid when it enters a test vial.

“When it came to the swabs we thought, ‘Hey, that’s a great fit!’” Ou recalls. “Swabs need to be soft, flexible, the structures on the tip need to be very intricate. That’s what we do.”

Ou worked with members of MIT’s Center for Bits and Atoms and an external microbiology lab to compare OPT’s swabs with traditional, Q-tip-like cotton swabs. The tests showed that OPT’s swabs released 20 times the amount of bacteria for testing. That’s important because more specimens increases the sensitivity of tests, particularly rapid tests, according to Ou.

OPT’s additive manufacturing system can produce the company’s hairlike microstructures in a highly automated way that allows OPT to compete on price with traditional swab makers. The company currently is able to produce 80,000 swabs a day in its facility, and Ou says OPT is building newer versions of its machines that can produce products even more quickly.

OPT has secured partnerships with large health care organizations such as the distributor Henry Schein to get its swabs into hospitals, health clinics, and at-home testing kits.

The startup is also developing other medical sampling devices that use its high bacterial collection rate to test for other diseases. In May, OPT will move into a new office in Medford, Massachusetts, that will bring together its lab and production teams. Ou says the goal is to speed up the cycle from product ideation to design, prototype, optimization, and production.

“We’re trying to be like [the multinational products company] 3M in additive manufacturing,” Ou says. “Everyone knows 3M because they have a lot of different products that are essential to daily life. That’s the model we’re going after. We have other medical and cosmetic products under development — the swab is just the beginning.”