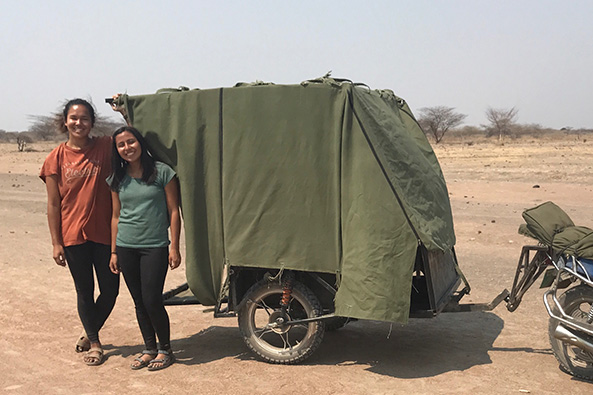 In Tanzania, rural villages are often hours from medical facilities. Mortality among pregnant women is a grave problem: Lack of health care access results in complications and even death for either mother or baby. As many as 400 women die for every 100,000 live births.

The Okoa Project aims to change this with motorcycle ambulances. Ambulances attach to bikes and are made of locally sourced materials complete with a stretcher to accommodate patients in crisis. They’re also large enough to fit an additional person, such as a midwife or spouse, for support.

“If you’re sick or pregnant, riding on the back of a motorcycle for three hours is uncomfortable, and people try not to [use them],” explained Eva Boal ’18, an MIT Sloan undergraduate and the company’s business lead. “Women often give birth on the side of the road.”

Typically, motorcycles are dispatched by clinics to transport patients in need of medical care — and that mode of transportation is slow and unreliable. Due to road condition at their side when they give birth, Boal said.

“These motorcycle ambulances are versatile, affordable, and safe,” Boal said.

“They’re comfortable, so a woman can lay down rather than bouncing on the back of a motorcycle, and she can bring a family member with her.”

This is important: Motorcycle drivers are often reluctant to even transport a pregnant woman for fear of a crisis happening along the way, she said. And because the ambulances are removable, motorcycle drivers can use their current vehicles. This makes the product accessible to anyone who owns a bike.

The project began at MIT’s D-Lab class in 2016, which focuses on engineering and international development. Students from MIT Sloan’s Development Ventures class have acted as advisors on the project.

The Okoa Project, founded by a 2017 MIT graduate and an MIT senior, won $10,000 at the MIT IDEAS global challenge in May. The challenge rewards the best innovations that improve the lives of people around the world.

The company is getting closer to making good on that goal. A prototype is in development, and the group is working on safety testing and hopes to receive government approval on the ambulance. Boal will relocate to Tanzania when she graduates. The team hopes to bring the product to market in January 2018.

“This type of ambulance is a huge incentive for motorcycle drivers,” she said.