Alumnus Takes Food Out of the Kitchen and into the Lab 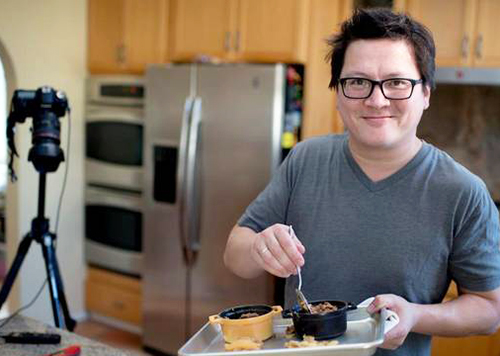 “The Food Lab” is the Twitter handle of J. Kenji López-Alt '02 as well as the title of his new book. But there was a time when it hardly seemed likely that López-Alt would be closely associated with lab work.

As an MIT student, he swore off labs for good, switching his major from biology to architecture. “I spent my summers in high school and the summer after my freshman year working in labs. I got disillusioned with it,” he says. That’s how he ended up in the kitchen.

In his sophomore year, while classmates were looking for research opportunities, López-Alt began looking for work as a waiter. He came upon a short-staffed restaurant that offered him a job in the kitchen on the spot. “That day I started to cook, I knew I wanted to work in food,” he says.

López-Alt honed his cooking skills in Boston restaurants and at MIT: he cooked for the Number Six Club, a nationally affiliated coed literary fraternity, where he was also a member. But after years in the kitchen, he was ready for a change. “Working in restaurants, you don’t get a lot of opportunities to explore. I always had the question of why we were cooking something a certain way,” he says.

A job as a recipe tester for Cooks Illustrated gave López-Alt the chance to find some answers, but it was when he began working for the popular food blog Serious Eats that he really got to explore. His column, “The Food Lab,” promises to “unravel the mysteries of home cooking through science.” For López-Alt, taking a scientific approach to food might mean running multiple experiments to identify how to cook the perfect hardboiled egg or how to make expertly battered onion rings. His style resonates with readers. “Cooking is as much a science as it is a craft. It turns on a lightbulb for people and makes it more exciting,” he says.

The popularity of the column led to his award-winning first book, The Food Lab: Better Home Cooking through Science. The book earned the 2016 James Beard Award for General Cooking and the International Association of Culinary Professionals Cookbook of the Year Award.

When López-Alt isn’t working on his second book, he is putting his architecture degree to work remodeling the Bay Area home that he shares with his wife, ­Adriana López-Alt ’07, who has earned a PhD in cryptography.

“The education you get at MIT is valuable no matter what field,” he says, adding with a laugh: “The architecture degree really came in handy when I got to draft and submit my own plans for the house.”

This article originally appeared in the MIT Technology Review.