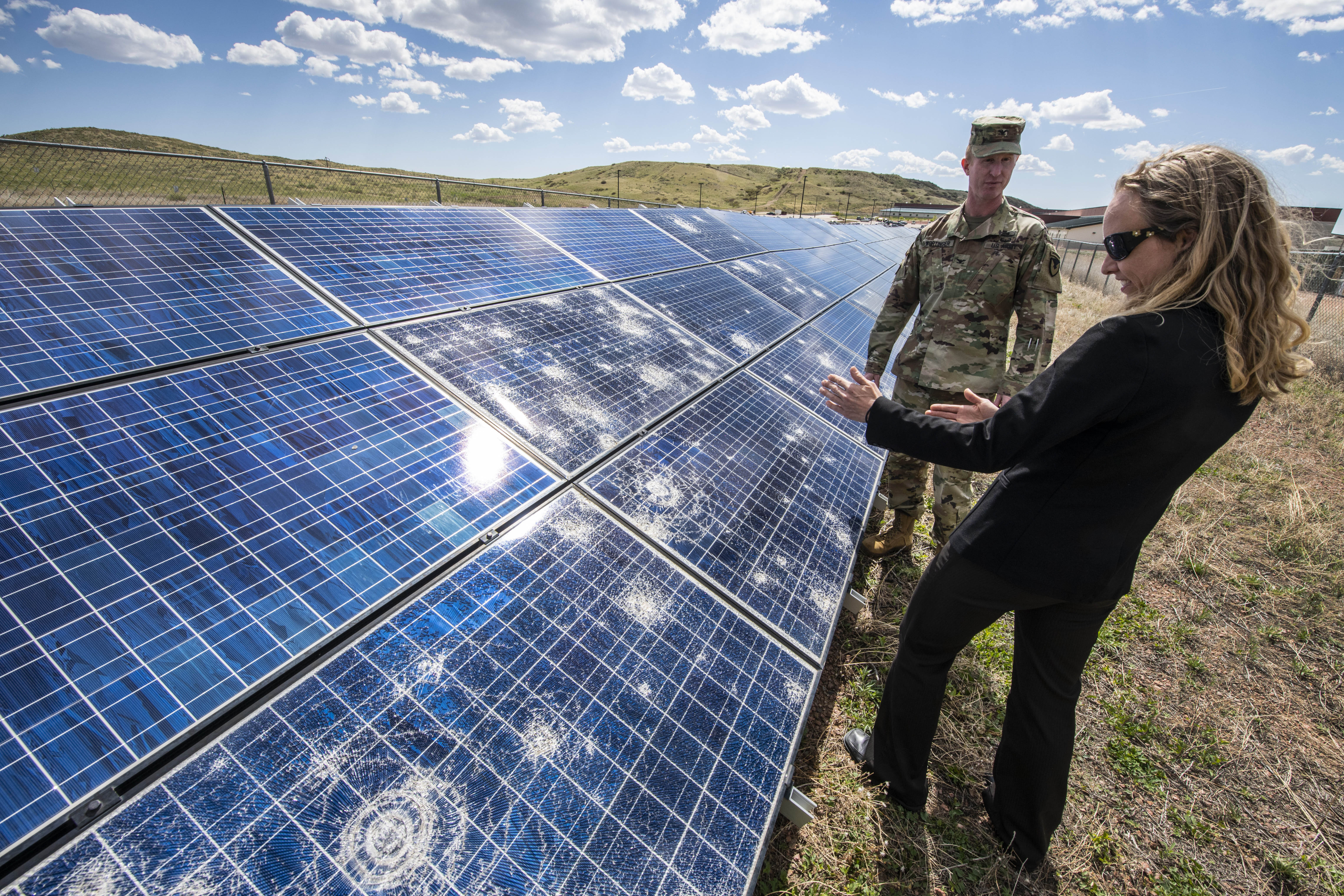 Kate (Zimmerman) Anderson ’00 thought she wanted to become an astronaut. She majored in aerospace engineering at MIT, joined Air Force ROTC at the Institute, and soon after graduation went to work as a launch vehicle engineer at the US Air Force’s Space and Missile Systems Center in New Mexico.

A quirky feature of the New Mexico housing landscape, earthships are a type of self-sustained, off-grid home, and they—along with other green practices common in the region—piqued Anderson’s interest. “Instead of looking to space, I got interested in sustainability and renewable resources,” she says.

Today, Anderson serves as chief of staff for energy systems integration at the National Renewable Energy Laboratory (NREL) in Colorado, where she focuses on helping governments and other organizations make the transition to clean, resilient, and affordable energy systems. Increasingly, she says, this involves not just technological solutions but work with communities to help people make informed decisions.

The amazing people I get to work with give me hope. They are all so driven by this vision to create a clean energy future for the world.

“Most people are not focused on reaching 100 percent clean energy. They have other priorities, like well-paying jobs and good health for their families,” she says. “By hearing their concerns, you can think about how to convey the benefits of clean energy.” For example, rather than highlight just the climate impacts of moving to renewables, leaders might choose to underscore health benefits, such as reducing the incidence of asthma caused by air pollution.

Anderson admits that grappling with the human factors that affect energy decision making can be challenging. “It’s hard for me to get away from the numbers and acknowledge that people are people, and they are going to do things that the numbers don’t agree with,” she says.

Fortunately, Anderson is always open to educating herself about new challenges; she is a lifelong learner. After graduating from MIT, the Air Force helped her attain an MBA from the University of New Mexico and a master’s degree in renewable energy technology from Loughborough University, in the United Kingdom.

She left the Air Force as a captain and—with help from an MIT alumni connection—joined NREL in 2008. Then she spent more than a decade developing sophisticated models to help organizations make sound economic decisions about renewable energy. One tool, the REopt model, has been used by more than 50,000 organizations worldwide; it is now available for free online.

However, when Anderson sought to document the impact of such modeling, she learned something concerning. “After working with hundreds of partners and modeling thousands of sites, we went back to talk to people and asked if they implemented everything. Most had not,” she says. “That got me wondering why not.”

The answer, she believes, is that human decisions are rarely based entirely on data. The adoption of solar power, for example, might depend less on economics than on social influences such as what the neighbors are doing.

That’s why today Anderson’s work focuses on engaging with people to learn what motivates their energy choices. For example, to help Los Angeles reach its goal of providing reliable, 100 percent renewable electricity by 2035, her team and the Los Angeles Department of Water and Power are meeting with community members to identify constituents’ concerns and priorities. “It’s not easy,” says Anderson, who was promoted to chief of staff at NREL in 2021. “But that’s what you need to do to get to the real transition.”

As the coordinator for NREL’s energy justice initiatives, Anderson is also working to ensure that energy researchers consider the human costs of technology decisions. For example, the choice about whether to use cobalt in a battery might factor in not only its usefulness in extending battery life but also its social costs to mining communities. “By the time you get to deployment, inequity can be baked in,” she says, and that is why NREL has made energy justice a top priority.

In November 2021, Anderson earned the Social, Economic, and Policy Innovation Award from the US Clean Energy Education and Empowerment Initiative. And in May, the lifelong learner graduated from the Colorado School of Mines with a PhD in advanced energy systems.

Fighting climate change can be daunting, Anderson admits, but she says she is optimistic about the future: “The amazing people I get to work with give me hope. They are all so driven by this vision to create a clean energy future for the world.”